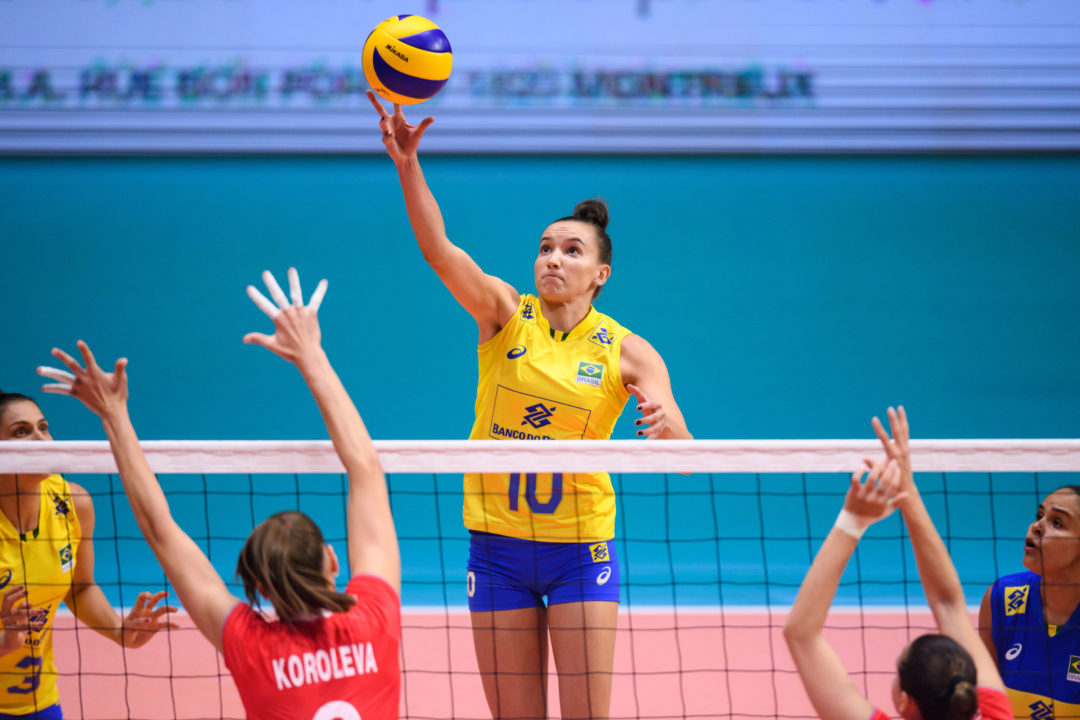 Without Tandara Ciaxeta, Brazil's Gabi (above) stepped up with 18 points as Brazil beat Russia 3-1 on the first day of the Montreux Volley Masters. Current Photo via FIVB 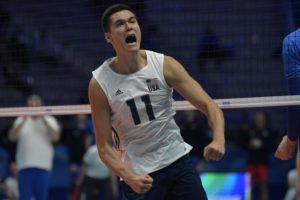 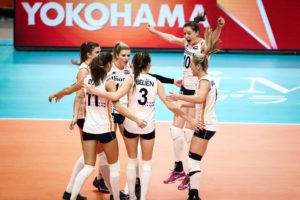 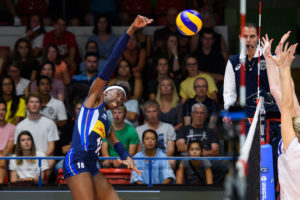 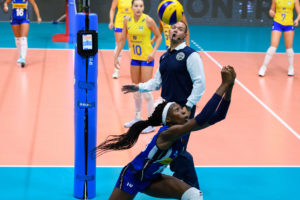 32 from Egonu, 19 from Goncharova Lead Italy, Russia to Montreux Final

19-year old Paola Egonu took over in Saturday’s semi-final between Italy and Brazil, finishing with 32 points.

Day 1 of the 2018 Montreux Volley Masters Tournament, a 6-team tournament that’s been played since 1984, offered few surprises. Even with the World Championships coming up, the tournament is absent of many of its stars like Zhu Ting from China and Tandara Caixeta.

But, most teams have brought bigger rosters than they usually do for this tournament, which is typically reserved to bring international experience to younger players.

That includes Russia, who brought effectively their ‘A’ roster and the same one that they used earlier this summer at the Rabobank Super Series in Holland.

In spite, in the biggest match of the day, Brazil was able to knock off Russia 3-1. China, in spite of a whole new roster, was able carry their momentum forward from the Asian Games and sweep the host Swiss handily 3-0, while Turkey topped Italy in the late match.

Outside hitter Liu Yanhan and Hu Mingyuan led China with 12 points each, including 10 kills from Liu and 5 blocks from Hu. Hanyu Yang chipped in another 4 blocks as China out-blocked Switzerland 11-2, hit 51.8%, and held Switzerland to 30.2% in a dominant performance.

Maja Storck led Switzerland with 11 points, including 8 in the opening set.

Brazil is without their biggest star, the 30-point machine Tandara Caixeta, this week, but that was no problem in their opening match against Russia. Gabi scored 18 points with 14 kills on 37 swings, 2 blocks, and 2 aces. Brazil out-blocked Russia 16-11, and most importantly out-served them 8-2 to take the advantage in the match.

That’s in spite of the fact that Russia out-hit Brazil 39% to 35% in the match, led by 18 kills from Nataliya Goncharova. Irina Fetisova contributed 6 blocks. Brazil got 5 blocks from Carol, 4 from Rosamaria, and 4 from Thaisa Daher.

When Turkey and Italy faced in the opening week of the Volleyball Nations League earlier this summer, Turkey won 3-0, just as they did on Tuesday. The difference there was that Italy was without a number of their star players, including their top scorer Paola Egonu. On Tuesday, those star performers were on the court, including Egonu, and the result was the same: 3-0 in favor of Turkey.

The team was led by 12 from Meryem Boz, who had 8 kills, 1 block, and 3 aces in the match. Cansu Ozbay chipped in 4 aces as Turkey had a 10-5 scoring advantage from the service stripe. Hande Baladin and the captain Eda Erdem each also chipped in 8 kills for Turkey in an even more efficient day: while Boz’s 8 kills took her 24 swings, Baladin and Erdem did it with just 14 each.

Egonu led Italy, but was short of her usual offensive output with just 12 kills on 34 swings.