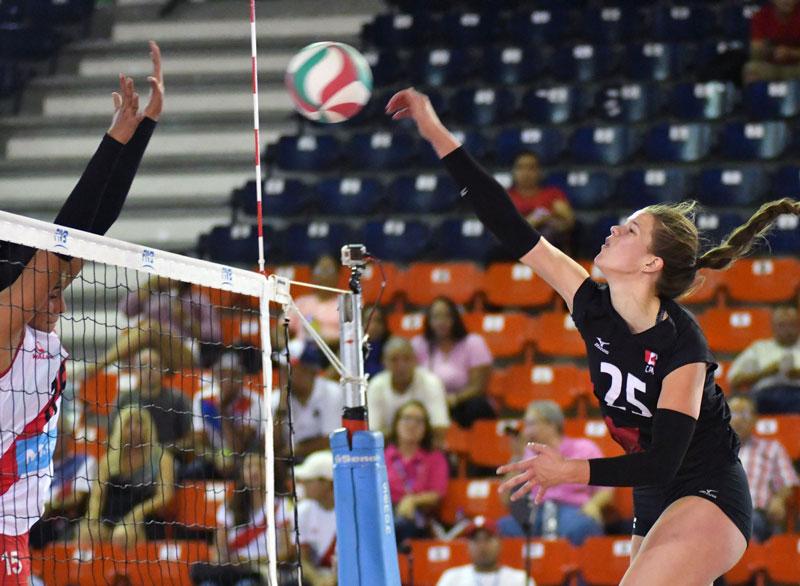 Pool A action at the Pan American Cup got under way on Sunday with a pair of sweeps at the hands of Canada and the Dominican Republic. Current Photo via NORCECA

Pool A action at the Pan American Cup got under way on Sunday with a pair of sweeps. First up, Canada bested Peru in a daytime match, then the host Dominican Republic downed Costa Rica 3-0.

“I am very happy for the result and proud about the performance of my young players like Van Ryk who is only 18 years-old,” Canadian coach Marcello Abbondanza said.  “They were nervous in the first set but we have many players without international experience.”

Canadian miscues kept Peru in the game as the team gave away 11 points on errors. For its part, Peru committed 19 errors. Canada bested the Peruvians 41-25 in kills, 5-2 in blocks and 10-2 in aces.

“A little bit sad because we played a good first set but were not able to close it,” Peruvian captain Clarivett Ylescas said. “Their serves put a lot of pressure after the second set. Our team is better than that and I expect to improve.”

The Dominican Republic utilized 13 of its 14 players in a sweep of Costa Rica with 11 of them scoring in the match.