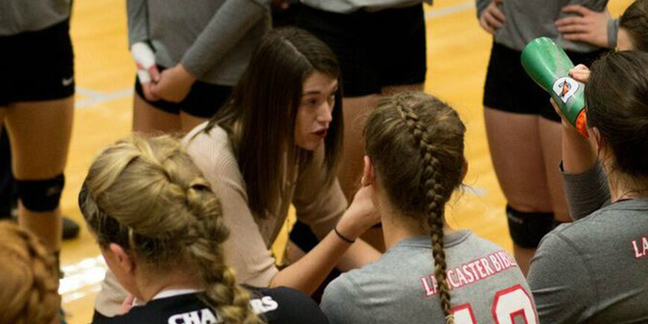 Smith returns to her native Minnesota after guiding her Lancaster Chargers squad to a 12-20 overall record with a .667 winning percentage in the North Eastern Athletic Conference (NEAC) and a berth in the 2017 NEAC Championships.

Smith will be the ninth coach in Carleton volleyball history. She takes over the reins of the program from Heidi Jaynes, who was promoted to a full-time athletics administration role in March after registering a school-record 272-212 ledger in 19 seasons at the helm.

“We are very excited that Jacki decided to become Carleton’s new volleyball coach,” Carleton Athletic Director Gerald Young said. “Coach Smith’s enthusiastic dedication to teaching, along with her commitment to the Division III philosophy makes her the ideal person to lead the Knights program.”

Prior to her time in Pennsylvania, Smith served two seasons as an assistant coach at her alma mater, the University of Northwestern-St. Paul (UNWSP). While on the coaching staff there, the Eagles won back-to-back Upper Midwest Athletic Conference (UMAC) regular-season and postseason titles to earn berths in the NCAA Championships. The 2015 squad advanced to the NCAA regional final while the 2016 team went 34-5 and advanced to the NCAA semifinals.

“I’m very excited and honored to join the Carleton family and to take on the role as head women’s volleyball coach,” Smith said. “I’m very thankful for Gerald Young, Heidi Jaynes, and the rest of the search committee for their confidence in me and their willingness to take a chance on a young coach.

“Throughout the process, it became very clear to me that every member of Carleton athletics is fully committed to the well-being of the student-athlete. I am excited to work along so many individuals who share the same passion as I do for building relationships and making a lasting impact on their student-athletes.”

A two-sport athlete at UNWSP, Smith graduated in December 2014 and jumped right into coaching after the Eagles’ 2014-15 basketball season concluded. She spent the next two years as head coach for the U-16 girls basketball team for Crossfire Youth Sports, an AAU program based in Champlin, Minn. In July 2015, she added volleyball and girls basketball coaching positions at Concordia Academy, holding all three roles until July 2017.

Smith, a middle hitter on the volleyball court, battled injuries throughout her playing career at Northwestern but finished with 136 career blocks (0.91 per set). The Eagles made the NCAA Division III Tournament every season Smith was with the team and won at least 23 matches each year.

On the basketball court, Smith was an All-UMAC and NCCAA All-Region selection as she played 85 games (28 starts) over four seasons for the Eagles. She was a member of the 2014 squad that advanced to the NCAA Women’s Basketball Championships as well as the 2015 UMAC Co-Championship team.

Smith grew up in Shoreview, Minn., and attended nearby Concordia Academy in Roseville, Minn.