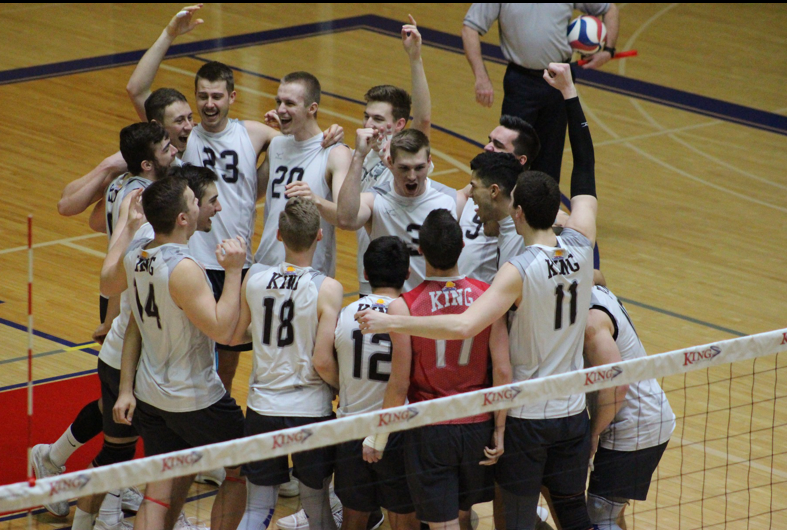 Both #17 King and (RV) Barton won in four sets in their respective Conference Carolinas semifinals match. They meet each other in Bristol, Tennessee on Saturday to decide the automatic bid to the NCAA I-II tournament. Current Photo via King Athletics

Key Stats: Although the match went one set over the minimum, King clearly dominated this match in multiple categories. The Tornado led in hitting percentage (.350-.123), kills (56-43), blocks (11-5), digs (48-40) and aces (3-2). The Abbey also committed 17 unforced hitting errors as well as 10 service errors to compound their issues.

Stat Leaders: Jeff Sprayberry had a match-high-tying 19 kills on .375 hitting against the Crusaders. He also contributed 8 digs and 2 blocks. Kiel Bell finished with 13 kills and a match-high 17 digs to complete the team’s only double-double. Middle blocker Jon Wheaton led all net defenders with 7 blocks to go with his 9 kills. Setter Nick Drooker directed the offense with 46 assists, while adding 5 digs, 4 blocks and a match-high 2 aces.

For Belmont Abbey, Liam Maxwell carried the Crusaders again with a match-high-tying 19 kills on .318 hitting. He was joined in double digits by Brian Long and Gavin Schaffer with 10 kills each. No other Crusader had more than 2 kills. Setter Brennan Davis led the Abbey with 41 assists and 14 digs, earning the team’s only double-double. William Morris led the net defense for the Crusaders with 3 blocks.

It Was Over When: After fighting so hard to continue the match, winning set 3 in extra points, it seemed as if Belmont Abbey could push the match to 5 sets. At 10-all in set 4, however, King went on a 15-5 run, which included 7 unforced hitting errors by Belmont Abbey.

Key Stats: Similar to the other semifinal match, Barton led in most of the statistical categories, including hitting percentage (.352-.167), kills (61-44), blocks (12-9) and digs (40-35). Mount Olive kept themselves in the match behind the service line with 8 aces while Barton only had 2.

Stat Leaders: The usual suspects in the form of the Mandilaris brothers led the way for the Bulldogs. Both pounded 15 kills each, with older brother Vasilis hitting a robust .407 on the night while adding 9 digs. Younger brother Angelos added 4 blocks and 3 digs. Rounding out the double-digit kill performers was Aleksa Brkovic with 14 kills on .357 hitting. He added 7 digs on defense, but his 7 service errors helped keep Mount Olive in the match. Setter Oscar Fiorentino finished with 53 assists, 6 digs and 4 blocks. Libero Tim Wiese led all floor defenders with 13 digs. Justice Lord was impressive at the net, earning 7 kills on .600 hitting to go with a match-high 7 blocks.

It Was All Over When: In set 4, Barton held a slim 15-14 lead. Four kills, 3 blocks and a time-out later, Barton pushed their lead to 8, and Mount Olive couldn’t recover. Justice Lord was in on all three blocks, while four different Bulldogs (the Mandilaris brothers, Lord and Brkovic) had the four kills.