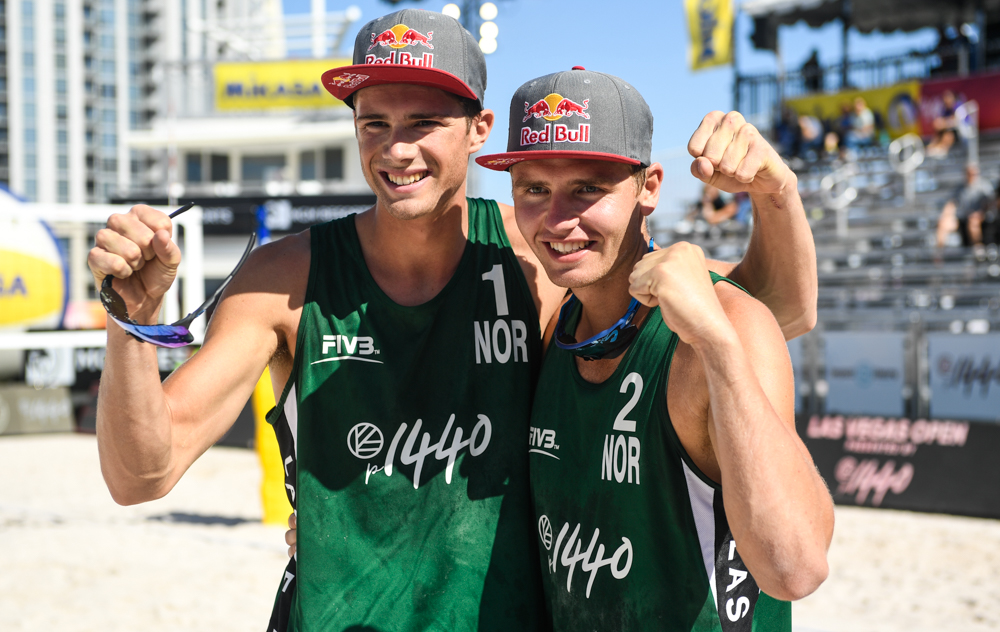 It was a familiar duo atop the men's podium at the Las Vegas Four Star on Sunday as Norwegians Christian Sorum/Anders Mol claimed their fourth straight FIVB title, besting Poland's Grzegorz Fijalek/Michal Bryl for the gold.  Current Photo via FIVB

It was a familiar duo atop the men’s podium at the Las Vegas Four Star on Sunday as Norwegians Christian Sorum/Anders Mol claimed their fourth straight FIVB title, following wins at the Gstaad and Vienna Majors and the World Tour Finals, besting Poland’s Grzegorz Fijalek/Michal Bryl for the gold.

“What’s happening with us still seems unreal,” Sorum said. “These last few months have been crazy and it’s great to end the year on a high. Now we have three weeks off and after that we head to Tenerife to start preparing for 2019. It’s an important season and we want to keep up the good results.”

The runnerup finish marked the third of the year for the Poles behind the Norwegians (also at the World Tour Finals and the Vienna Major).

The Americans had their chances, including five match point tries, but could not finish off the win.

“Third sets are always unpredictable and we just wanted to keep our minds fresh and focus on the next point,” Stoyanovskiy said. “These have been great results for us and they’ve put us already in a good spot for Olympic qualification. We’ll take a month off, rest, and prepare to come back stronger in The Hague in January.”

The Russians were coming off a runnerup finish at the Yangzhou Four Star last week, while Crabb/Bourne were vying for a second podium finish following gold at the Qinzhou Three Star (Oct. 4).