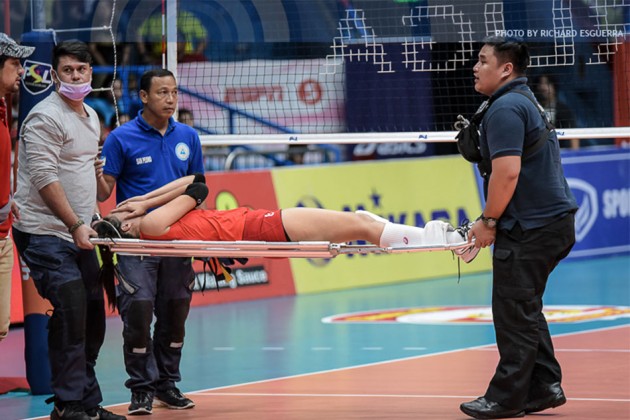 After previously reported as a strained muscled following a bad fall in the Philippine Super Liga, Cignal's Jovelyn Gonzaga has officially been diagnosed with a torn ACL. Current Photo via Philippine Superliga/Richard Esguerra

After previously reported as a strained muscled following a bad fall in the Philippine Super Liga, Cignal’s Jovelyn Gonzaga has officially been diagnosed with a torn ACL.

The loss of Gonzaga will be a huge blow to the Cignal team and is expected to be out for at least half a year to recover from the injury. The diagnosis comes just weeks after the injury and weeks before the team will kick off the Philippine Super Liga Grand Prix on February 17. It was originally thought that Gonzaga had just gone down with a strained muscle and would only be out for one to two weeks but an MRI revealed the tear in her ACL.

Watch the play that took Gonzaga down:

Gonzaga will have surgery on her right knee sometime in January, once it is strong enough to go through the operation. The injury sidelines Gonzaga for the next six to eight months.

The team’s backup, Mylene Paat will take a leave of absence prior to the start of the Grand Prix, as she will join Adamson University in the University Athletic Association of the Philippines. Also off the team coming up are middle blocker Maica Morada as she moves to Australia and outside hitter Janine Marciano as she went down with a right knee injury as well with her MRI results to be known next week.