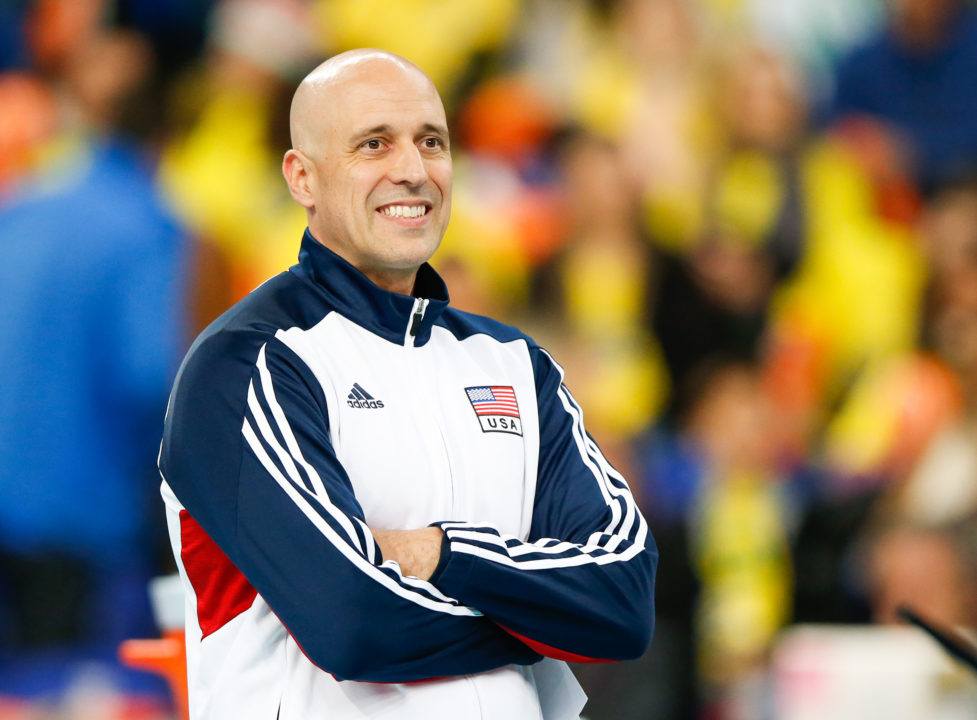 #2 UCLA head coach John Speraw earned his 100th victory as a Bruin in a four-set win over #9 Penn State. Current Photo via FIVB

UCLA used a balanced attack in the victory. Both JT Hatch and Christian Hessenauer finished with 11 kills each. Hessenauer added 6 blocks while Hatch helped on net defense with 5 of his own. Daenan Gyimah had an impressive and efficient night, hitting .800 (8-0-10) with match-highs of 7 blocks and 3 aces. Setter Micah Ma’a ran the offense to a .359 hitting clip, adding 42 assists 6 digs and 3 kills to the fray. Libero Garland Peed equaled Hatch for match-high honors in digs with 7.

Penn State was led offensively by Aidan Albrecht with 13 kills. Albrecht was the lone Nittany Lion in double-digits on the night. Setter Luke Braswell distributed 32 assists and added 4 digs and 2 blocks for PSU. Libero Royce Clemens joined Matthew McLaren with team-highs of 6 digs each against UCLA.

The tournament continues on Saturday morning at Pauley Pavilion, with Penn State taking on USC at 11am Pacific Standard Time, with the hosts battling Ohio State at 1:30pm PST.

The No. 2-ranked UCLA men’s volleyball team won its sixth match in a row and number 100 in Coach John Speraw‘s career as head coach of the Bruins in a four-set victory over No. 9 Penn State in first night action of the 2018 AVCA Men’s Volleyball Showcase event in Pauley Pavilion. Scores of the match were 25-15, 19-25, 25-20, 25-22. Seniors JT Hatch (11 kills, 5 block assists) and Christian Hessenauer(11 kills,  6  block assists) led a balanced Bruin attack.

In set one, UCLA blew out to a 12-6 lead after a kill by Hatch. The Bruins kept a good working margin throughout the set and a Micah Ma’a kill made it 20-13. The final three points of the set came on one of Daenan Gyimah‘s seven blocks, an ace from Dylan Missry and a Hatch / Gyimah combo block in a 25-15 Bruin win. Hatch totaled four kills and three block assists in the set. Missry and Gyimah each registered a pair of service aces and Ma’a totaled six digs and set the team to a .474 percentage.

The Bruins’ service game abandoned them in set two as they totaled 10 service errors and seven hitting errors for the set. Penn State moved to a 7-10 advantage. UCLA got to within one at 11-12 after a kill by Hatch but could not grab the lead. The visitors opened up a 16-22 margin and took the set at 19-25 after the 10th Bruin service error.

Penn State grabbed an early 4-6 edge in set three. UCLA came back to even the score at points 7 thru 13. Two Hatch kills and an ace by the senior hitter lifted UCLA into a 16-13 advantage. Penn State came back to within two at 18-16, but could not get closer. Oliver Martin‘s kill on set point gave UCLA a 25-20 win. The Bruins hit .348 for the set to .036 for Penn State.

The Nittany Lions held an early lead in set four, but UCLA managed to even things up at 8-all on a block by Gyimah and Hessenauer. The score was then level at points 13, 15 and 16 before a Hatch kill and a Gyimah smash made it 18-16. Another kill by Gyimah made it 21-18. Penn State closed to 22-21, but UCLA answered on a kill by Martin followed by a Martin block and went on to take the set 25-22.

Garland Peed tied Hatch for the team lead in digs with seven. UCLA hit .359 for the match to .186 for Penn State. The Bruins had a season-best block total of 19 block assists and out blocked PSU for the match 11.5 to 4.0. UCLA will next meet up with the two-time defending national champions from Ohio State who defeated USC in four sets in Thursday’s opening match.

Aidan Albrecht and Calvin Mende finished No. 1 and No. 2 for Penn State in kills, recording 13 and eight, respectively vs. the Bruins.

For the second time in three matches, Matthew McLaren led the Lions in digs totaling six digs on the night.

Luke Braswell turned in 32 assists digs to go along with his four digs and two blocks.

UCLA took the opening set convincingly by a score of 25-15 over the Lions but were matched by a second set win from Penn State who knotted the match 1-1 after taking set two 25-19.

Penn State was within a few points throughout the third set before UCLA pulled away late to take the set 25-20.

Looking to force a fifth and deciding set, the Nittany Lions led throughout the majority of the fourth set before the Bruins charged down the stretch to clinch the set 25-22 and the match 3-1 to move to 6-0 while the Lions fell to 2-1 overall in 2018.

Penn State remains in Los Angeles, Calif. to take part in its second match of the PAC-12/Big Ten Challenge where the Nittany Lions will face USC at Pauley Pavilion – the site of the 2018 NCAA Men’s Volleyball Championships in May – Saturday, Jan. 20 at 2:30 p.m. ET.