LBSU Hits Road To Take On Stanford On Saturday 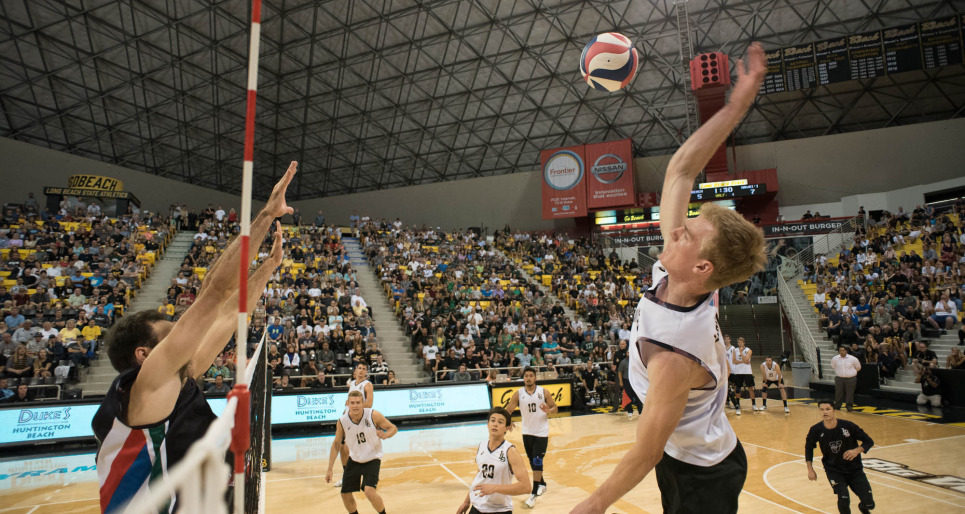 Long Beach State boasts a 6-0 record marking the program’s best start to the year since 2008 when the Beach went 9-0 to kick off the season.  Current Photo via LBSU Athletics

Top-Ranked Long Beach State Heads to Stanford
The Long Beach State men’s volleyball team concludes its longest road swing of the season at Stanford on Saturday, January 20. The top-ranked Beach will take on the Cardinal at 7:30 p.m. at Maples Pavilion. The contest will be streamed live on Pac-12.com.

About The Beach
• Long Beach State boasts a 6-0 record marking the program’s best start to the year since 2008 when the Beach went 9-0 to kick off the season.
• With a pair of sweeps at No. 11 Lewis and No. 7 Loyola Chicago last week, the Beach swept the Big West Conference weekly awards as Josh Tuaniga was named Player of the Week, Nick Amado earned Defensive Player of the Week accolades, and Simon Anderson picked up Freshman of the Week honors.
• Tuaniga also was named VolleyMob’s Player of the Week after helping the Beach to a .417 attack percentage at No. 11 Lewis and No. 7 Loyola, while dishing out 61 assists on the week.
• Tuaniga has now racked up 2,678 career assists and moved into the number seven spot on Long Beach State’s career record book.
• Junior TJ DeFalco is closing in on a major milestone as well. The outside hitter has knocked down 985 kills in his career and is just 15 shy of becoming the 21st playing in LBSU history to reach the 1,000-kill mark.
• Junior opposite Kyle Ensing has opened the season on fire, leading the Beach in kills in four of six matches thus far. Ensing currently leads the team with 60 kills to average 3.16 per set. He also averages 1.26 digs, 0.74 blocks, and 0.37 service aces per set.

In the Rankings
Long Beach State moved into the No. 1 spot in the country after earning a pair of road sweeps at No. 11 Lewis and No. 7 Loyola Chicago last week. With last week’s No. 1 team, Ohio State, dropping a a five-set contest to then-No. 6 BYU, the top ranking opened up for the Beach to slid in.

Stanford comes into the contest against No. 1 Long Beach State receiving votes as the Cardinal has struggled early on with a 1-5 record.

This season, LBSU will take on eight of the 15 nationally ranked teams as the Beach face a very competitive schedule.

Scouting The Cardinal
Stanford comes into the match against No. 1 Long Beach State with a 1-5 overall record. The Cardinal’s lone win of the season came last week at No. 14 Ball State as Stanford earned a 3-0 sweep.

Jaylen Jasper is the team’s leader in kills with 74 for an average of 3.36 per set. He is also second on the team with 1.18 digs per set behind Evan Enriques’ 2.86 digs per set.

At the net, Stanford is led by Kevin Rakestraw’s 14 blocks for an average of 0.67 per set.

Series vs. Stanford
Long Beach State and Stanford will face off for the 80th time in program history. The Beach leads the all-time series 50-29. LBSU defeated Stanford last season 3-0, but the Cardinal was victorious over the Beach the before that as they snapped Long Beach State’s eight-match win streak with a 3-1 victory at Maples Pavilion. When playing at Stanford, LBSU owns a slight edge over the Cardinal, posting an 18-16 series record.

Up Next
Long Beach State returns home after its six-match road swing to host Stanford on Friday, January 26 at 6 p.m. The contest marks the Beach’s first home match since January 3, when they swept McKendree in the season opener.