Colorado to Face Wyoming for Rumble in the Rockies Title 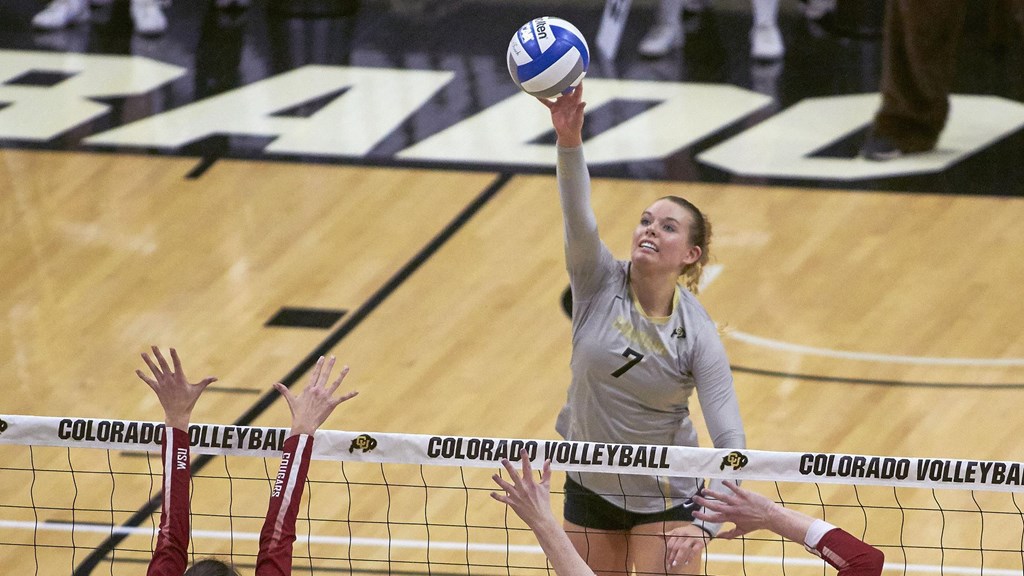 The Rumble in the Rockies title will be on the line Saturday night after both Colorado and host Wyoming went 2-0 on opening day.  Current Photo via Colorado Athletics

Rumble in the Rockies

The Rumble in the Rockies title will be on the line Saturday night after both Colorado and host Wyoming went 2-0 on opening day. The match will be streamed live here at 9 p.m. ET.

Key Stats: Twelve blocks, including seven by Lillie Klemmer, and double-digit kill efforts from Alexa Smith and Justine Spann paced the Buffs in the victory. Colorado hit .240 or better in the three sets they won, but were held to a -.065 effort in Set 2. Oral Roberts managed a .391 clip in that set, but barely cleared .100 otherwise.

CeCe Madison downed 15 kills to pace ORU and just missed a double-double with nine digs. Katarina Mikulic was right behind with 11 kills and nine digs. Morgan Blomquist put up four blocks, while Bria Bergman and Bri Greenlee added three each.

How It Happened: After falling behind 4-2 in Set 1, Colorado put together an 18-5 run, including five ORU miscues and three blocks, and held on for the win. Set 2 was a different story with the Golden Eagles breaking away mid-set, stretching a one-point lead to 10 with a 14-5 rally, including five Buff errors and two kills and a block by Bergman.

The teams played to a 15-all tie in Set 3, before momentum swung to Colorado with a 10-4 run, including four stuffs by Klemmer. It was another close affair in Set 4 with the teams tying nine times, last at 11. Five miscues plagued ORU from there and Smith came through with four kills down the stretch to cap the 25-18 win and the match.

Key Stats: North Florida’s Taryn Griffey was the lone player to post double-digit kills in the match with 14, but Wyoming’s efficient offense by committee lifted the Cowgirls to the sweep.

Wyoming hit .337 in the match with six of its seven players with a hitting attempt managing a .300 or better effort. Griffey hit .385 but was the lone bright spot in an otherwise dismal .011 UNF effort. Part of that was due to a 15 block stand by the Cowgirls, while seven Wyoming aces also kept the Osprey offense out of sorts.

How It Happened: UNF quickly found itself down 16-4 in Set 1 and never recovered, despite posting a 7-2 run. It was the same song in Set 2 as a 15-4 Cowgirl lead was too much to overcome although they rallied to within 10 late at 21-11. In Set 3, the Ospreys went up 9-5 with help three kills by Griffey. Wyoming turned the tables with a 12-3 run, including kills by four different Cowgirls, three UNF errors and three blocks. At 17-12, the teams began trading points, leading to a 22-17 score. Two Copeland kills and a third by Taphagan sealed the match.

Stat Leaders: Justine Spann took the driver’s seat for the Buffs offense with 14 putaways, while Alexa Smith and Danielle Price added 12 and 9 respectively. Spann and Smith just missed double doubles with nine digs apiece, while Price put up seven blocks. Spann hit at a .481 clip with just one miscue.

How It Happened: UNF led by as many as three in Set 1 (13-10) and held a slight advantage at 23-22 after a 3-1 run late in the stanza. Two Spann kills and a stuff by Lauren Dorrell and Lillie Klemmer stole away the set for Colorado.

The Ospreys went up 12-11 in Set 2, but could not hang on as Colorado rattled off 11 of the next 13 points to vault ahead 22-14. Four kills and three blocks highlighted the rally. The teams split the next six points, but two Anyse Smith putaways capped the 25-17 win.

Key Stats: Oral Roberts was crushed by 12 Wyoming blocks and committed 24 total hitting errors in the match, hitting -.037 on the night. Meanwhile, Wyoming managed a .423 clip as a team and outdid ORU 43-21 in kills.

Stat Leaders: Jackie McBride hit at a perfect 1.000 clip with eight kills amongst the leaders for Wyoming. Tara Traphagan (9) and Halie McArdle (8) were right alongside her, hitting .500 and .571 respectively. Traphagan put up a match-high seven blocks, while McBride added six stuffs.

Inka Inkret was the top scorer for ORU with five kills and a block. Taylan Nero added four putaways and two stuffs, as did CeCe Madison.

How It Happened: Set 1 was never in jeopardy as a 7-1 run put Wyoming on top early and the Cowgirls soon led 19-5 en route to the win. Traphagan notched five kills in the stanza, which also saw ORU commit eight errors. Set 2 was close early, but UW built an eight point lead at 20-12. Kills by four different players set up a final stuff by Traphagan and Reed Copeland. In Set 3, Wyoming had help from 10 Golden Eagle errors and built a 10-point lead at 20-10 before finishing off the match at 25-18 on a Kaytlen Freeland putaway.