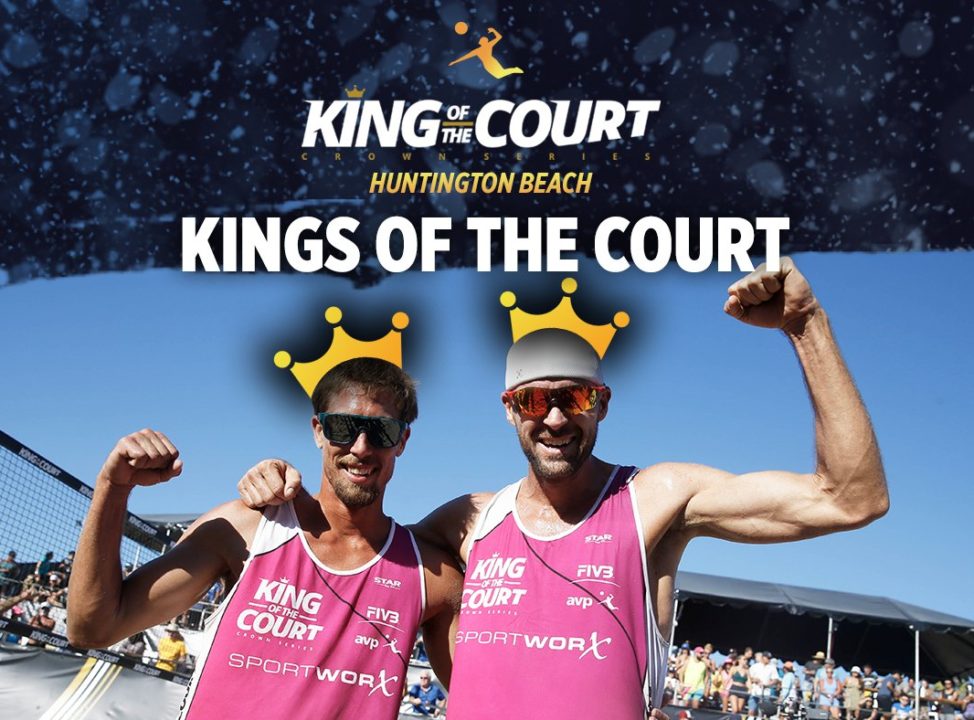 Americans Taylor Crabb/Jake Gibb won their second straight King of the Court crown, following victory in Waikiki last week with another win in Huntington Beach on Sunday. Alix Klineman/April Ross finished off the USA sweep with the women's crown. Current Photo via AVP

In the second semifinal, Crabb/Gibb and fellow Americans Jeremy Casebeer and Reid Priddy advanced to the finals. Americans Trevor Crabb/Tri Bourne earned the final spot moving through the Lucky Loser’s round.

Beeler was joined in the finals by the Netherland’s Robert Meeuwsen after Marco Krattiger had to exit due to injury.

Crabb/Bourne were the first team out in the finals, followed by Casebeer/Priddy. Crabb/Gibb closed out their second straight title run, scoring 15 points to six by Herrera/Gavira and five by Beeler/Meeuwsen.

The title was the second in a row for Crabb/Gibb, while it marked the second podium finish for Herrera/Gavira, who won the title in Utrecht.

“This format is physically demanding but it’s a lot of fun,” said Gibb, a long-time Huntington Beach resident.

Once in the finals, Hughes/Ross were the first eliminated followed by Agatha/Duda. Klineman/Ross scored 15 points in the third round of finals action, outdoing Pavan/Humana-Paredes (11) and Howard/Reeves (2) for the crown.

The runnerup finish marked the second King of the Court podium finish for the Canadians, who were third in Waikiki.

“It was amazing to win on my home beach, Ross said. “I’m so stoked to win in front of you guys. The field was so tough out there, that final was ridiculous, the semis were ridiculous – this means a lot to come out on top.”