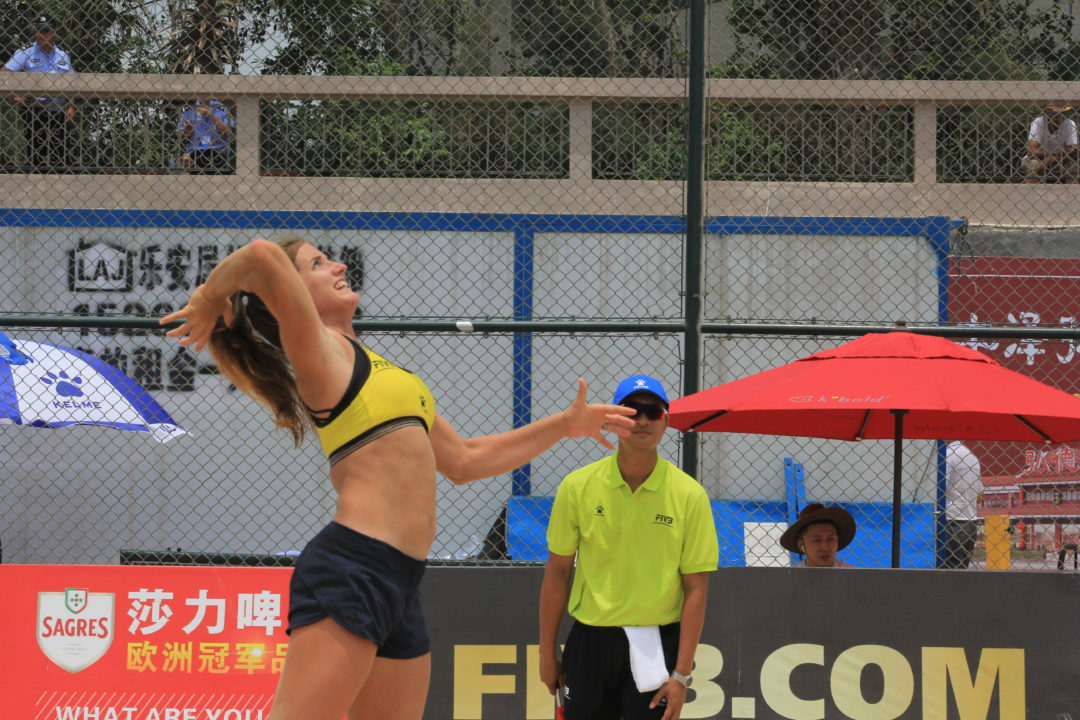 The medals race is down to four teams on each side at the Jinjiang Two-Star, with the women playing through the semifinals on Saturday and the men stopping after the quarterfinals. Current Photo via FIVB

The medals race is down to four teams on each side at the Jinjiang Two-Star, with the women playing through the semifinals on Saturday and the men stopping after the quarterfinals.

After the final six pool play matches, eight round of 16 matches and four quarterfinal duels, the Jinjiang men’s podium race is down to its final four teams.

Second seeded Americans Trevor Crabb/John Mayer won in straight sets in the Round of 16 and quarterfinals to secure their spot.

Joining the Americans in the medal hunt are two teams from Germany: No. 3 Nils Ehlers/Lorenz Schumann and No. 11 Max Betzien/Jonathan Erdmann and China’s No. 5 Gao Peng/Li Yang.

Crabb/Mayer and Ehlers/Schumann won their respective pools on Friday. The Americans bested No. 12 Armin Dollinger/Simon Kulzer (Germany) and No. 10 Jan Dumek/Vaclav Bercik (Czech Republic) to reach the semifinals.

Gao/Li went the distance in the Round of 16, besting No. 4 Nejc Zemjak/Jan Pokersnik of Slovenia 21-12, 12-21, 15-10, and then ousting Switzerland’s pool winners No. 8 Gabriel Kissling/Michiel Zandbergen in straight sets to move on to the final four.

Crabb/Mayer will be looking for their second straight medal after winning the Lucerne Three-Star on May 13. The pair is facing off against Gao/Li in the semis. Gao/Li are looking for their first FIVB World Tour medal of any kind.

Ehlers/Schumann have already achieved their best FIVB finish as a duo, topping a fifth-place effort at the Qinzhou Three Star in October. They will look to top countrymen Betzien/Erdmann, who also are seeking their first ever FIVB World Tour medal. The duo’s best previous finish was ninth at the Aalsmeer One Star in March.

On the women’s side, it will be an all Asian final pitting No. 4 Sayaka Mizoe/Suzuka Hashimoto (Japan) against qualifiers Kou Nai-Han/Liu Pi Hsin (Chinese Taipei) for the gold. Americans Aurora Davis/Bree Scarbrough will battle Japan’s No. 9 Chiyo Suzuki/Reika Murakami for the bronze.

Suzuki/Murakami and Kou/Liu both battled through tiebreak matches in the Round of 16. The former took out Americans Amanda Dowdy/ Irene Pollock 25-18, 19-21, 15-13, while Kou/Liu ousted Canadians Marie-Christine Lapoint/Charlotte Sider, rallying for the 19-21, 21-14, 15-12 victory.

Scarbrough/Davis, who were seeded 24th after making it out of the qualifiers, faced a battle in the quarterfinals, going the distance against Lithuania’s fifth-seeded Ieva Dumbauskaite/Irina Zobrina 21-12, 11-21, 15-13.

Mizoe/Hashimoto are coming off back-to-back podium finishes following a gold at the Tuan Chau Island One Star May 12 and silver at the Phnom Penh Two Star on May 6.

Kou/Liu are looking to earn the first ever podium finish for Chinese Taipei and become the 15th women’s time to win a gold medal after starting in qualifying.

Scarbrough/Davis are coming off a gold medal at the Bangkok Open on May 13. Suzuki/Murakami have already achieved their best finish, topping a fifth-place effort at the Langkawi One Star in April and Shepparton One Star in February. 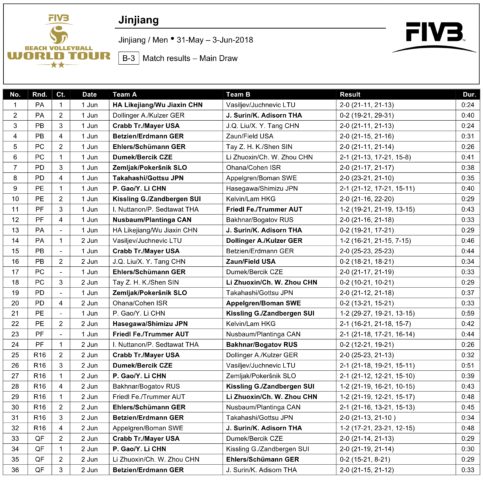 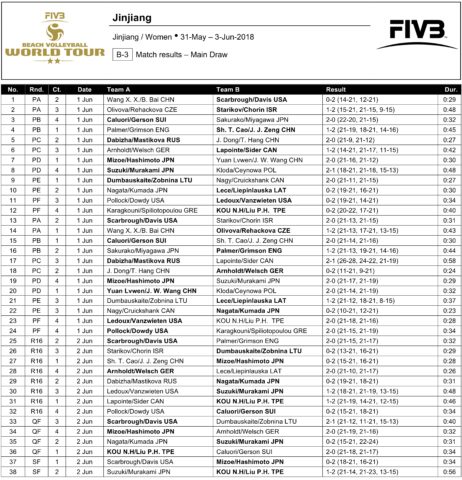