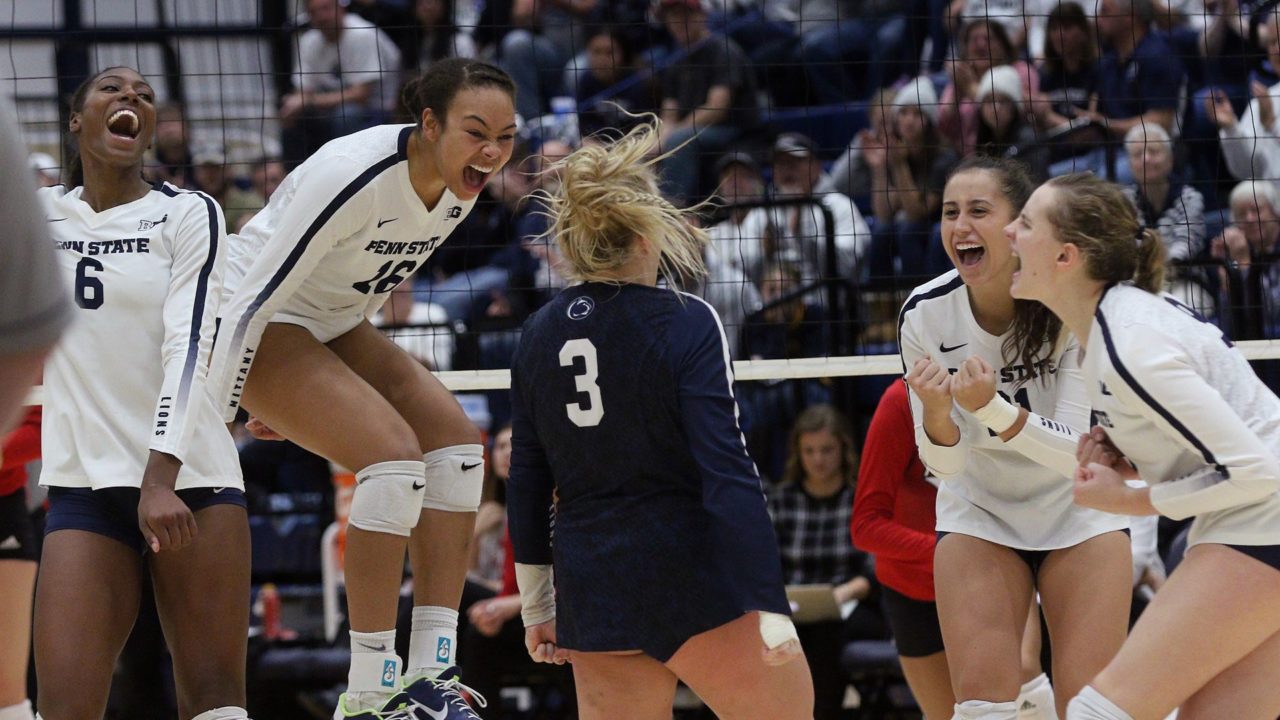 The Penn State women's volleyball took down Minnesota 20-25, 25-21, 30-28, 24-26, 15-12 on Friday night, snapping a 19 match win streak for the Gophers and handing the Big Ten champions their first conference loss of the year.  Current Photo via Penn State Athletics

Penn State was led by freshman Jonni Parker who put down a career-best 29 kills, the most by a freshman since 2001, while hitting .265 on 68 attempts. She also added seven digs and five blocks. She totaled 31.5 points on the evening.

Redshirt senior Bryanna Weiskircher dished out a career-best 63 assists, which is third most for a five-set match in the 25-point rally scoring era. Weiskircher tacked on 15 digs for her 10th double-double of the season, and 28th of her career. She also added five kills, five blocks and guided the team to a .245 hitting percentage.

In the middle, the duo of freshman in Kaitlyn Hord and Serena Gray combined for 21 kills and 12 blocks. Hord finished with 12 kills, hitting .346 and added a match-high seven blocks, while Gray put down nine kills on .318 with five blocks.

Junior libero Kendall White finished with a match-high 27 digs, she also added three assists and an ace. White is now at 477 for the season, and 1,439 for her career, the most by a player in their third season of play. White is just 35 digs from tying Dominique Gonzalez for fourth place on the Penn State career digs leaderboard at 1,474. She is also just 30 digs from tying the 25-point era single season record of 507 digs, held by Alyssa D’Errico in 2010. White’s single season career-best is 500 in her freshman campaign.

Penn State came out slow to start the match, hitting just .100 with 12 kills, while Minnesota put down 16 on .273 hitting. However Penn State’s defense helped keep them in the opening set with 24 digs and 2.0 blocks. Minnesota took the opener, 25-20.

In the second set, the Nittany Lions hit an impressive, .364 with 17 kills, led by Parker who had seven, while hitting .500. Kendall White also played a big factor as the libero scooped up eight digs in the second set. Penn State jumped out to an early 16-10 lead, and despite a small run by Minnesota down the end of the set, Penn State came out with a 25-21 set win to even the match at 1-1.

In the third set, the two squads showed how much of a battle this match was set to be. The team traded runs and leads, and Penn State fought tooth and nail to take a 30-28 win after trailing 21-18. Penn State saw Parker put down nine of the Nittany Lions’ 21 kills, while the team tallied 4.0 blocks in the set.

Penn State looked to retain that momentum into the fourth set, and it seemed to be going the Blue & White’s way as Penn State took a 14-10 lead early in the match. However, it was Minnesota’s turn to battle back, and the Gophers were able to take the set, 26-24. Parker again was the offensive work horse for Penn State, leading with seven kills, but she got some aid from Reed as she put down five, while hitting .500.

In the fifth and deciding set, the two teams battled. The Gopher jumped out to a 5-2 lead and took a 8-6 lead at the switching of the sides. A service run by White tied the game at 9-9 on an ace, forcing Minnesota to call a timeout. From there, Penn State built off the gained momentum and took the set, and match, with a 15-12 fifth set win.

The Nittany Lions return to action on Saturday, November 24, 2018 at 8 p.m. as they host No. 8 Wisconsin in Rec Hall. The match will be aired on the Big Ten Network.

The loss snapped Minnesota’s unbeaten Big Ten record and a 19-match win streak. The Gophers are now 18-1 overall and 24-3 this season, the first loss for the Gophers since Sept. 9. Penn State, who hasn’t lost to the Gophers since 2004 on their home court, improved to 23-6 this season and 14-5 in the Big Ten.

Minnesota was led by Stephanie Samedy has she had 24 kills and hit .357. Alexis Hart had 16 kills, followed by Taylor Morgan and Regan Pittman, who each had 12 kills. Morgan hit .545 in the match, while Pittman added a .360 hitting clip. Samantha Seliger-Swenson had a season-best 63 assists, while CC McGraw had 24 digs. Pittman also led the Gophers with seven blocks.

Set 1: Samedy added eight kills while the team added 28 digs en route to a 25-20 set win. Minnesota took an early 5-3 lead off back-to-back Gopher blocks and later went up 10-6 off a Hart kill. Penn State, however, came back to tie the set at 13-13 on a kill off the block. Samedy added back-to-back kills to put the Gophers up, 15-14 at the media timeout. Minnesota took a 20-17 lead off a Pittman kill as PSU called its first timeout. Minnesota took a 23-19 lead when Hart added her third kill of the set as the Nittany Lions burned their second timeout. Samedy added two kills as the Gophers took the set, 25-20 and a 1-0 lead.

Set 3: Despite hitting .357 in the set, the Gophers fell, 28-30 in the third set. As the Gophers trailed 7-5, Minnesota took a 9-7 lead off a Pittman kill. PSU fought back and tied the set at 9-9. Minnesota went on a 3-0 run and took a 14-11 lead off a pair of PSU hitting errors. Samedy added a kill for a 16-14 lead, while a Seliger-Swenson block put the Gophers up, 18-15. PSU pulled within one at 19-18 as Minnesota called a timeout. Samedy added Minnesota’s 20th point of the set off a kill, while a PSU attack error caused the Nittany Lions to call a timeout. Samedy added a kill for a 22-19 lead, and another at 23-21. The two-point lead forced PSU to call its second timeout of the set. Minnesota went up set point off a Samedy kill, but PSU came back to tie the set at 24-24. A kill gave PSU set point as the Gophers used their second timeout. Minnesota fought off four set points, but PSU finished off the set on back-to-back kills for the 2-1 lead.

Set 4: Minnesota hit .351 and came from behind to take the fourth, 26-24. Penn State opened the fourth set with a 6-3 lead as Minnesota called a timeout. As PSU led, 10-6, Morgan added a kill. Hart added back-to-back kills as the Gophers trailed, 9-13. Rollins added back-to-back kills, while Pittman produced a block as the Gophers came within two. PSU, however, put the lead back to four at 17-13 on a block. The Nittany Lions took a 19-15 lead off a kill. Minnesota went on a 3-0 run and cut the PSU lead to one at 19-18 as the Nittany Lions called a timeout. Samedy added a kill to tie the set at 19-19. Minnesota went up, 22-20 on a Morgan joust. Minnesota went up, 23-21 on a Samedy kill as PSU called its second timeout. PSU responded out of the break and tied up the set on two kills. The Gophers and Nittany Lions tied through 24-24. Pittman added a kill for set point, while Hart produced a block to tie up the match, 2-2.

Set 5: Minnesota went up, 5-2 off a pair of blocks from Pittman (one solo and one assist) and Rollins and a PSU attack error. The lead forced Penn State to call a timeout. As PSU earned back-to-back points, Samedy added a kill for a 6-4 lead. Minnesota went up 8-6 off a PSU attack error as the two teams switched sides. PSU, responded out of the break and went on a 3-1 run and tied the set at 9-9 off an ace as Minnesota called a timeout. The two teams traded points through 11-11 before Penn State took a 13-11 lead as Minnesota called a timeout. Minnesota pulled within one at 13-12, but the Nittany Lions finished off the set on two kills for a 3-2 win.