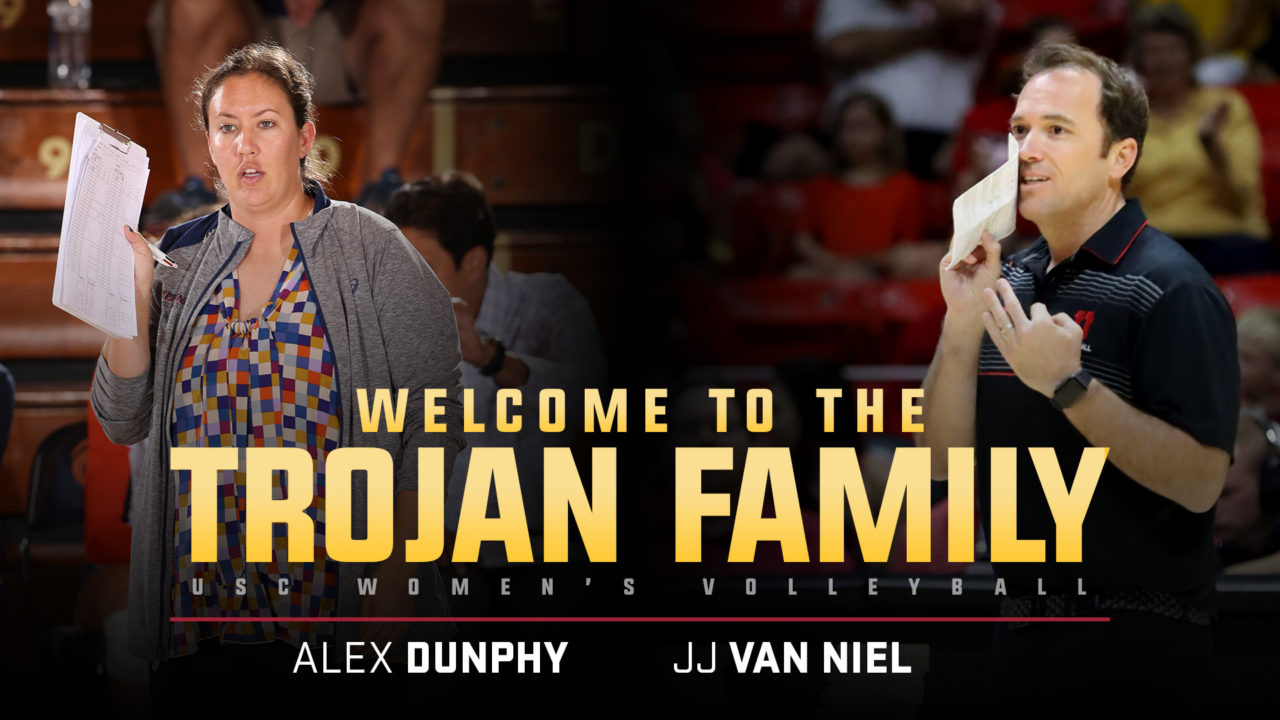 Alex Dunphy, a member of USC's 2003 NCAA champion team, and JJ Van Niel, who has spent the last three seasons at Utah, will round out newly-minted coach Brent Crouch's staff.  Current Photo via USC Athletics

Alex Dunphy, a member of USC’s 2003 NCAA champion team, and JJ Van Niel, who has spent the last three seasons at Utah, will round out newly-minted coach Brent Crouch’s staff.

“I am thrilled to have Alex and JJ join our staff,” said Crouch. “Raised in Southern California, both are alumni of USC, have coached at several high-level programs, and have each experienced a great deal of success. They have each been integral to the achievements of the programs they have worked with. My goal of developing a deep and mutually beneficial connection between USC and USA Volleyball will take another step forward with both Alex and JJ, as they have each served in important coaching and consulting roles with several USA teams, including the National Team. This is an A+ staff.”

Van Niel was named associate head coach, while Dunphy will act as an assistant coach and recruiting coordinator.

The 1998 USC alum was a late bloomer in the coaching world, spending 12 years in the financial realm before making the jump to volleyball. His resume includes time in the USA Volleyball ranks as both a CAP Level III and High Performance coach as well as most recently a stint with the women’s national team as a consultant coach, scout and team leader since 2013.

Van Niel also has found success in the club ranks with Coast Volleyball Club in San Diego where his 16s and 17s teams captured gold and bronze at the Girls’ Junior National Championships.

“JJ will serve as our associate head coach,” announced Crouch. “He will be heavily involved with practice planning, scouting, and oversee the analytics staff. Coming from the University of Utah, he already knows the Pac-12 very well, and has demonstrated the ability to push programs to new heights.”

Dunphy returns to the USC sideline after stints at Miami (assistant, 2013), Pepperdine (assistant, 2014-16) and Minnesota. Most recently, the 2007 alumna acted as assistant director of operations and video coordinator for the Gophers in 2017.

Dunphy, who played for the Women of Troy in 2003 and 2004, got started in volleyball administration as the Director of Operations with the Pepperdine men’s team. The daughter of Hall of Famer Marv Dunphy, was an assistant coach with the U.S. Collegiate National Team China Tour team in 2016 and also has seen time with the Santa Monica Beach Club and the head of the USA Volleyball Junior National Team delegation for the 2012 NORCECA Continental Championship.

“Alex will serve as our recruiting coordinator,” Crouch said. “With her knowledge and experience at USC; and her contacts around the country, she’ll hit the ground running recruiting. Alex also brings valuable knowledge and insight from top programs in the Big Ten.”

Welcome aboard coaches, and welcome home.