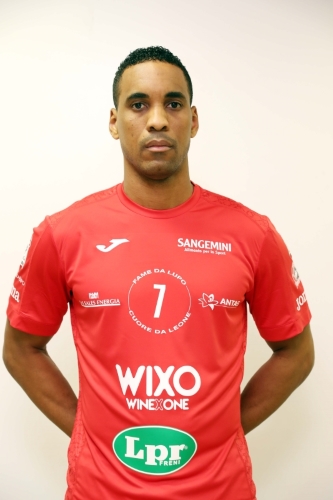 The Cuban star in being tried out in a new position for the Italian club Current Photo via Lprvolley.it

Cuban legend Leonel Marshall is probably one of the best know volleyball players in the world to non-volleyball fans. His fame can be credited to youtube’s early days, when various videos showing his insane jumping ability were posted on the website, which gathered millions of views. This is probably the most famous one:

Most people would be surprised to find out he is still playing, and at a high level, in Italy’s Serie A1 for Piacenza. The high flying player in now 38 years old and although experienced and with many tricks at the net up his sleeve, is not the same player who once had his jump touch height measured at a record breaking 13 feet. That is why it looks like Piacenza is trying him out in a different, less physically demanding position: libero.

Transitioning to libero is an option now being tried out by many older players, in an attempt to prolong their careers, like Brazil’s once high flyging superstar Murilo Endres, or to due to injuries like Team USA’s Megan Courtney.

Marshall played at the 2000 Olympic Games with the Cuban national squad before defecting to Italy, where he played the next 10 seasons for Piacenza and Roma. He then spent five years in Turkey with Fehnerbaçe and Arkaz Izmir, one year in China with BAIC, and is now currently back in Italy playing once more for Piacenza. Here is a list of his accolades:

Piacenza currently sits in 10th place in the standings of Italy’s Serie A1 with a 7-7 record.