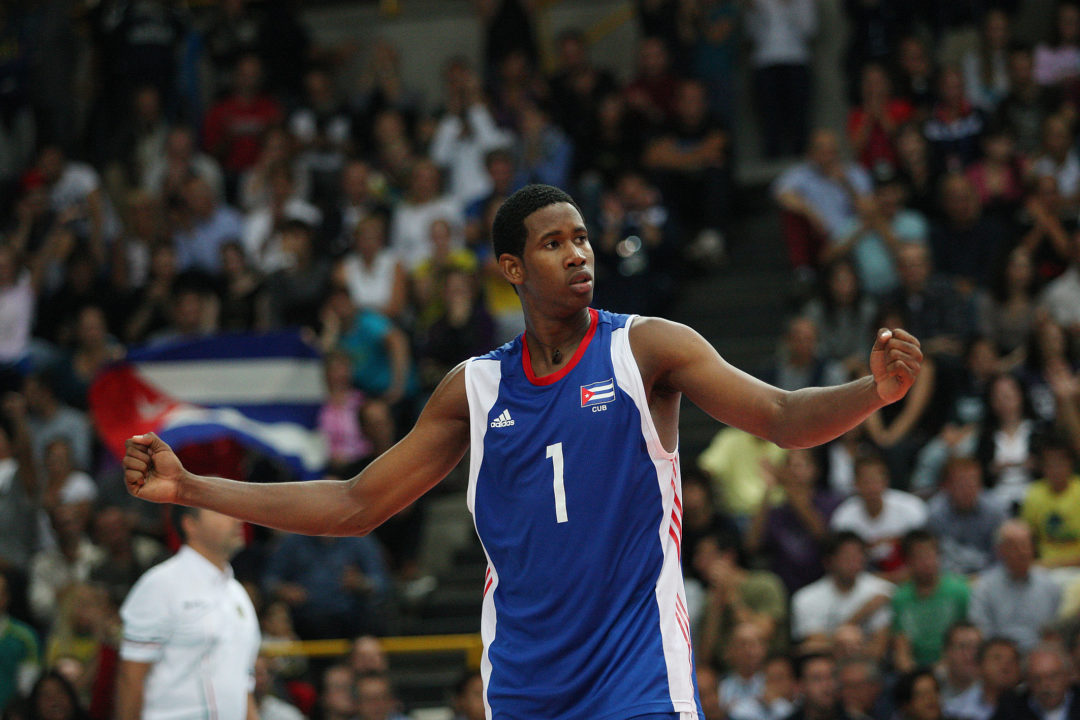 Wilfredo Leon last wore the Cuban national team jersey when he was only 17 years old. Now, as one of the best players in the world, and after defecting from his home country, he represents the Polish national team in international competitions. Archive Photo via FIVB

Cuba’s recent dramatic qualification for the 2018 World Championships was a bittersweet event. How can a country that has the best and highest paid male volleyball players in the world go through so much trouble to simply qualify for a tournament? Even sadder to consider, is that this is the same Cuban national team that has had historical success in the court, winning one World League in in 1998, one World Cup in 1989, and 15 NORCECA Championships.

Surely, if it had at its disposal all its best players, most elite national teams would have a lot of trouble keeping up with the Cuban squad. Instead, it plays its international competitions with youngsters and always get completely outclassed. This is a not a knock at current Cuban national team players, but with a squad with an age average of only of 21.6 years, no players on it would make the team if Cuba was able to call its best of the best.

Drawing up fantasy volleyball scenarios is a common pastime of many volleyball fans. Of these, perhaps none clouds the fan’s minds than that of a perfect Cuban male team removed from all of its bureaucratic problems and player defections. Due to strict regulations regarding professional sports in Cuba, all of country’s best volleyball players are scattered around the world, representing other nations in international play. The most recent cases of this is Yoandy Leal‘s Brazilian naturalization and Wilfredo Leon‘s clearance to represent the Polish national team.

We at VolleyMob also allowed ourselves to indulge in such thinking, and have come up with the perfect Cuban Defected Dream Team, with players who are ineligible to play for the squad. How far could it go in the 2018 FIVB World Championship?

We start off with the best paid male volleyball player of the world, according to Worldofvolley. Winner of the last three Russian Championships and CEV Champions League with Zenit Kazan, Leon is rumored to make over $1.4 Million per season.

At 6’7″, Leon is able to attack the ball at almost 12 feet, and has decent passing abilities. He is considered many the current best playing in the world. Able to play both hitter positions, Leon debuted with the Cuban national team at only 14 years old, and a year later won the best receiver award at the 2009 FIVB World League. At only 17 years of age, he captained Cuba to a silver medal in the 2010 FIVB World Championship. He defected from Cuba in 2013, and is now eligible to play for Poland. 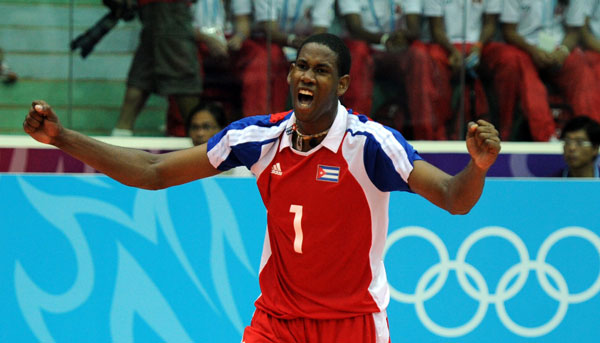 Just like Leon, Yoandy Leal was a star in Cuba since his teenage years, shining in domestic and international tournaments alike. Leal, now at 28 year of age, defected from Cuba to Brazil in 2010, and after two years of ineligibility joined powerhouse Sada/Cruzeiro to start off his briliant international career. After an additional long waiting period, he was also cleared to defend Brazil’s national team in international competitions.

Watching Leal play is a treat for volleyball fans, as he is the prototypical Cuban volleyball player, a master in all of volleyball’s basic fundamental skills. He is a very efficient server and spiker, regularly hitting over 60% in games, as well as a superb passer. 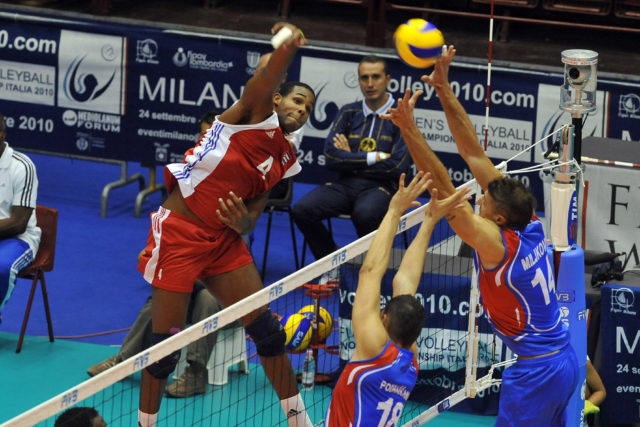 Watching Robertlandy Simon play is like watching someone play a videogame with cheat codes, he is just that good and above his competition. Standing at 6’10”, the 30-year-old middle-blocker is able to attack the ball at almost 13 feet. It is no surprise then, that he is also one of the world’s best paid players, earning around &1 million per season, according to Worldofvolley.

He has since defected from Cuba, and played in Italy, Quatar, Korea, and is currently a player for Brazilian powerhouse Sada/Cruzeiro, with fellow Cuban national Yoandy Leal. He has requested FIVB to be cleared to play for the Canadian national team. Here is a list of his accolades: 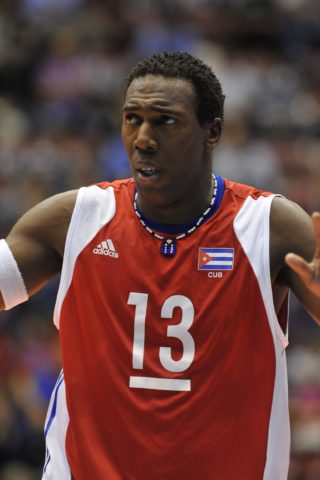 Isbel Mesa is another player in the list who was a silver medalist with the Cuban national team at the 2010 FIVB World Championship. Differently from the others, though, he didn’t defect from Cuba right after the tournament, instead spending a little more time in his home country, enough to win a bronze medal at the 2012 FIVB World League. He only defected in 2015, to play for Brazilian powerhouse Taubaté, winning a Brazilian Cup with the squad in 2017. Since he had to serve a two year suspension for defecting, he is only now getting back into perfect playing shape. At 6’8″ tall and able to attack at almost 12 feet, he will have no trouble making his name known in the Brazilian Superliga the next few seasons.

For the starting setter spot, we are going with Raydel Hierrezuelo Aguirre, who led the Cubans to silver medals in the 2009 Grand Champions Cup and the 2010 FIVB World Championship. Aguirre left Cuba in 2014 to play in Italy, where he wore Molfetta and Piacenza‘s collors. This year he made the change to Turkey’s Halkbank. Hierrezuelo is a tall setter at 6’5″, and is able to block at over 11″, which means Cuba’s defense will not be compromised when he is at the net. 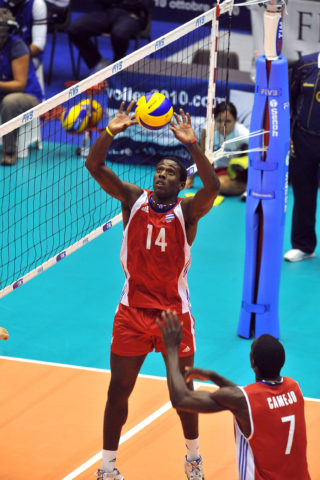 Since there are no elite Cuban liberos playing outside of Cuba, we are going with an unusual pick for the libero spot. Cuban opposite hitter Ángel Dennis was once one of volleyball best high flyers, standing at only 6’3″. Now, at 40 years old, it is safe to say that he has lost a bit of his springing power, thus making him the perfect candidate for a libero crossover, much like Brazil’s Murilo Endres recent move to the position. Although he was an outside hitter in his last few seasons with Modena, he started his Italian career as an opposite hitter with Lube, putting up decent receiving numbers.

With the Cuban national team, Ángel won the 1998 FIVB World League, before defecting to Italy and spending many seasons in League A1’s best teams. Currently, he is playing in Portugal for Sporting Lisbon. He is now a naturalized Italian. Here is a list of his many accolades:

Leonell Marshall – Opposite Hitter or Libero

Perhaps one of the best known Cuban volleyball players to the general crowd, due to the immense fame his amazing vertical leap prowess got on the early days of youtube, Leonell Marshall would surely be a strong candidate for a starting spot in our list if not for his age. The high flying player in now 38 years old and although experienced and with many tricks at the net up his sleeve, is not the same player who once had his jump touch height measured at a record breaking 13 feet.

Marshall played at the 2000 Olympic Games with the Cuban national squad before defecting to Italy, where he played the next 10 seasons for Piacenza and Roma. He then spent five years in Turkey with Fehnerbaçe and Arkaz Izmir, one year in China with BAIC, and is now currently back in Italy playing once more for Piacenza. Here is a list of his accolades:

Also a member from the Cuban squad that won silver medals at the 2009 FIVB Grand Champions Cup and 2010 FIVB World Championship, Hernández did not defect right away, choosing instead to remain in Cuba for a little longer. He also played the 2011 FIVB World Cup with the team, winning the Best Spiker award. He defected in 2012, and after serving his 2 year ineligibility time, debuted in the Japanese Premier league, where he played for 2 years. He then played played for Italy’s Mofeltta and Piacenza. 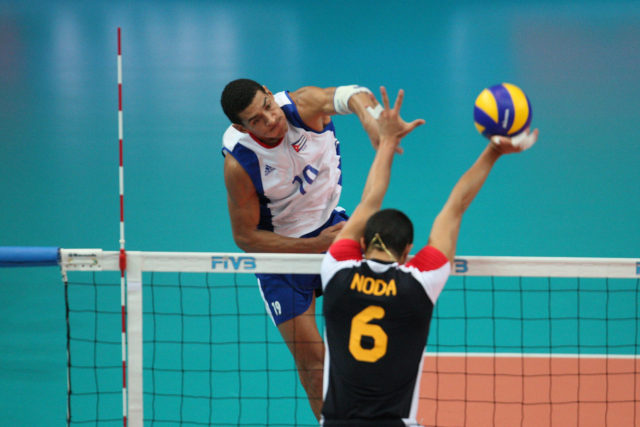 After winning the silver medal with the Cuban national team in the 2009 Grand Champions Cup, Sánchez defected to Russia. He served his two year illegibility, and then went on to play for Lokomotiv Novosibirsk, winning the 2011 Russian Cup with MVP honors. He has since played in many different Asian leagues and is a naturalized Russian Citizen. He is currently playing for Turkey’s Arkas Spor.

Oreol Camejo – Opposite Hitter or Setter

Originally an elite setter at the youth level, he was good enough to win Best Setter honors at the 2008 Olympic Qualification Tournament in Düsseldorf. Camejo then defected to Brazil in 2009. After waiting out his ineligibility period, he debuted for Vôlei Futuro as an opposite hitter, with which he spent two seasons and won a silver medal at the 2010 Brazilian Superliga. He has since played in Korea, Quatar, China, and Russia. With Lokomotiv Novosibirsk he won silver medals at the 2013 FIVB Club World Championship and 2014 Russian Championship. He currently plays for Zenit Petersburg.

U have totally switched the name of “outside hitter” and “opposite hitter”. Outside hitter is the one recieving…