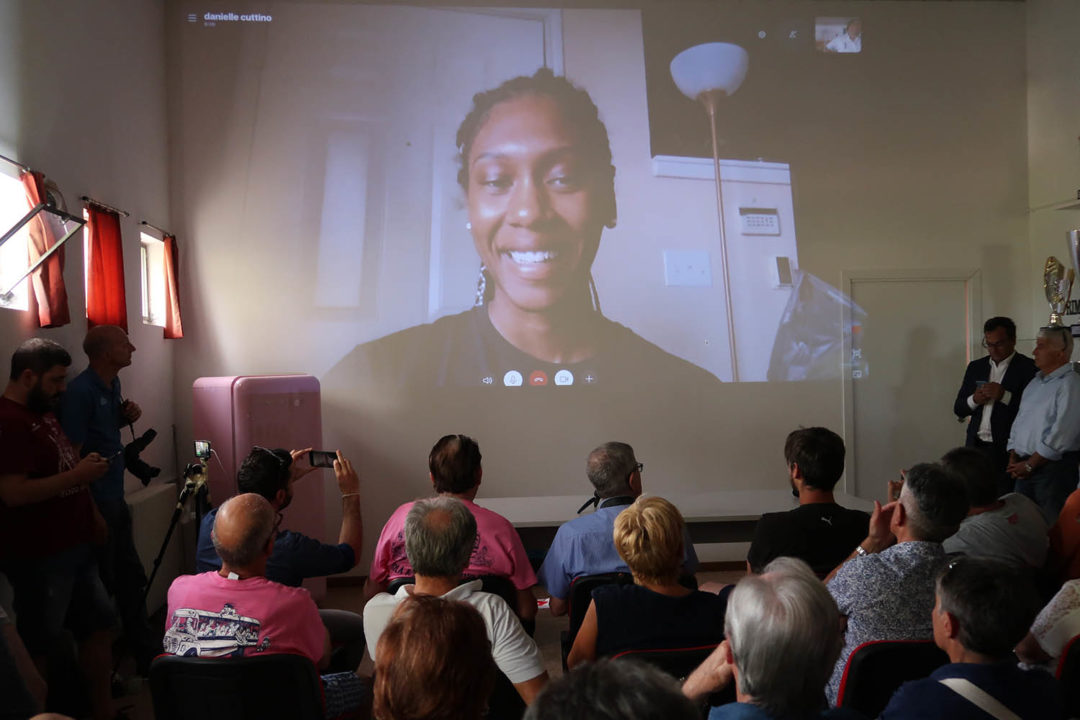 Technology at its finest Current Photo via http://www.volleyballcasalmaggiore.it

Recent Purdue University graduate Danielle Cuttino was recently announced by Pomi Casalmaggiore as one of the team’s summer acquisitions. Without a doubt, starting your professional career in a traditional club in the world’s best league is a privilege few athletes have. Regardless, as we have extensively show in the past, even Italy’s mighty A1 league doesn’t come without its quirks.

Cuttino was present in the latest “weird news” event out of the Italian volleyball universe. Known to have unusual player presentations, such as events done at truck companies, Casalmagiore held an event to present recent signed players Francesca Marcon and Silvia Lussana. Everything was going to the beat of a normal script, until the team’s staff turned a computer projector at a wall. Yes, they presented Cuttino to the press via Skype.

Clubs around the world are known incorporate foreign players later into their pre-season, thus saving a few months salary, although we can’t say that this was the case for Cuttino’s webcam presentation. Cuttino though, was all smiles, and shared her optimism with the press:

“I can not wait to start to work and realize my dream of playing in Italy. I can play in all the attack roles and I want to give my contribution to Pomì together with all my friends.”

Cuttino was Purdue’s X-factor during her tenure with the team, excelling at the middle blocker and outside hitter position. An AVCA Third Team All-American and an Unanimous All-Big Ten selection, she paced the team’s offense with 4.11 kills per set during her senior year. In joining Casalmaggiore, she will debut as a professional in one of the best teams in what’s arguably the toughest league in the world. Just how well will she transition? We’ll soon find out.