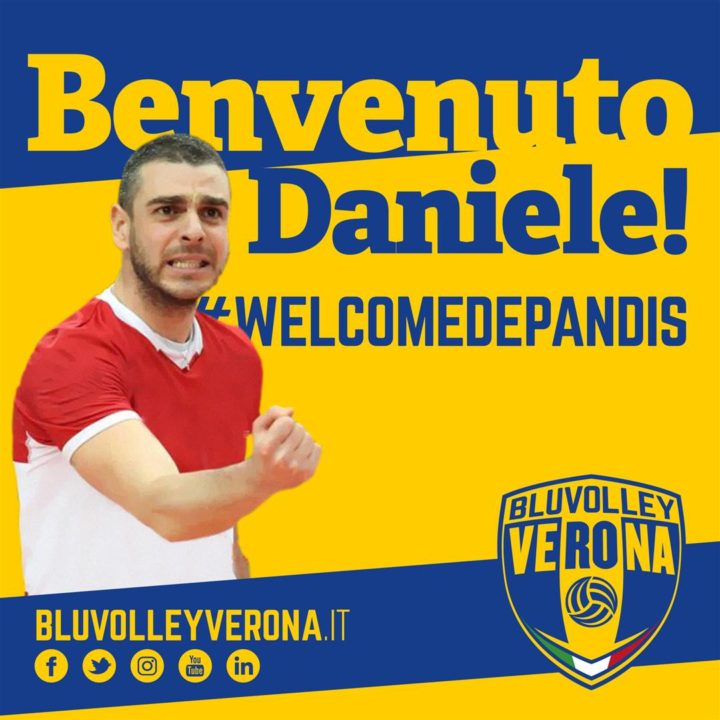 BluVolley finished the 2017-18 season with a respectable 18-8 record, good enough for 5th place in A1's standings Current Photo via https://www.bluvolleyverona.it

BluVolley Verona has announced in its official website the signing of one of A1’s best liberos, Daniele De Pandis, to its 2018-19 roster. The 34-year-old, who is transferring out of Diatec Trentino, should be officially presented by the team in the following days. The libero, with stints in Italy’s national team, has spent his whole professional career in Italy, making the move to A1 10 seasons ago. Here are his first statements after joining the club:

“Looking at it from the outside, I always liked Verona. The  arena and especially the fans made wonderful impression on me, as well as the team. So I decided to move north, for another busy year. The group? If it were to stay like it is now, I think we can be a pretty annoying team. A young and talented group, with me and Birarelli, who are the oldest, but with so much experience.”

Joining De Pandis is middle blocker Aimone Alletti, transferring out Piacenza, The experienced 6’9″ Alletti is about to undergo his 14th professional season. Here are his first statements after joining the club:

I chose Verona because it immediately showed great interest on me and presented me with a stimulating project, both from the technical point of view and stuff related outside of volleyball. It is one of the most solid teams in Italy, the only team in the country to manage a sports center. Next year will be a really exciting season. The level of the Italian championship has risen considerably in the last 2 years and the next one will grow further, every game will be a battle. I believe that the team has succeeded in setting up a team of the highest level, able to play with all the teams. I will try to make available to the team all my characteristics, trying to constantly improve and learn the winning mentality that has always distinguished people like coach Grbić and Birarelli. Verona fans perfectly reflect what is the ideal of the public in volleyball. When I came to play in Verona, I felt the beautiful climate inside the arena, with a lot of families and children. It will be a pleasure to be on the other side of the net now, I can not wait!”

BluVolley finished the 2017-18 season with a respectable 18-8 record, good enough for 5th place in A1’s standings.