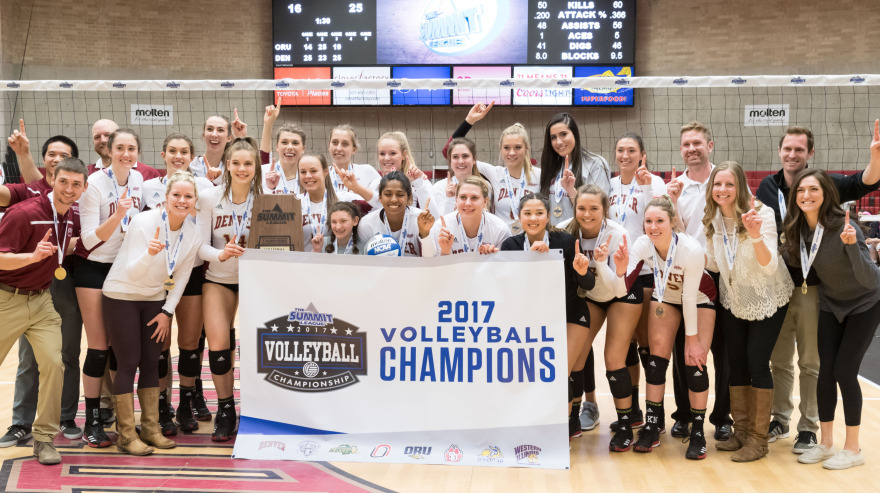 DENVER, Colo. – With a four-set victory over Oral Roberts Sunday afternoon, the Denver Pioneers earned their fourth-straight Summit League Tournament Title (25-14, 23-25, 25-29, 25-16). This is now the fourth-straight season that Denver has qualified for the NCAA Tournament.

DENVER— For the University of Denver women’s volleyball senior class, they close their Summit League careers with four Summit League regular season championships, and after a 25-14, 23-25, 25-19, 25-16 win Sunday afternoon against Oral Roberts, they are now four-time Summit League Tournament champions.

While the senior class continued their dominance, the freshmen class proved that the stage wasn’t too big, as three freshmen led the Pioneers in different categories in the match.

Junior Emma Willis hit .636 behind a career-high 15 kills in the final, including the clinching point to secure the victory for the Pioneers. Seniors Kayla Principato and Cassie Baird both also reached double digit kills, with 12 and 11, respectively.  Freshman Ellie Anderson assisted on 25 points to lead the Crimson and Gold, while senior Piyusha Boteju recorded her 11th double-double of the season with 21 assists and a team-high 11 digs. Senior Cassidy Rooke also had double digits in digs with 10. Freshman Tina Boecontrolled the net for the No. 1 seed, with a team-high six assisted blocks, and fellow freshman Macy Carrabine had back-to-back service aces in the first set to lead the Pioneers.

As a result of their performance this weekend, Principato was named Summit League Tournament MVP, and Willis, junior Becca Latham, and Principato earned All-Tournament Team.

Set One:  Denver had a 5-0 run to build an 8-3 early lead in the first set, with Principato registering three early kills for the Pioneers. A 4-0 run pushed the lead to eight at 13-5, but ORU responded with a 4-0 run of its own to chip back into the lead. The lead would get back up to eight at 20-12, before DU closed the set with a 5-2 run to win set one, 25-14.  The Pioneers scored the last three points of the set behind kills from Principato and Latham. DU hit .360 in the set behind 12 kills, three service aces and two blocks. Willis opened up the match hitting .800 with four kills, Anderson had six of DU’s 10 assists in the set, Rooke had three digs, and Carrabine had two aces to lead the Pioneers in the set. Boe had two assisted blocks in the first frame, teaming up with Principato and Baird. Baird also had a service ace. There were three ties, but no lead changes.

Set Two:  Oral Roberts took control of the set early on, going ahead by two at several early stages. They eventually were able to build the lead to four at 15-11, but DU went on a 5-1 run to tie the set at 16 with two Principato kills, a kill by Baird and an ace and kill from Boe. There were ties at 17 and 18, at which point, ORU tallied consecutive points to regain a two point lead. Denver pulled within one a couple of times late in the set (21-20, 22-21, 24-23), but was unable to get the tying point.  The Pioneers fought off set point twice with back-to-back kills from Baird before the Golden Eagles won the set 25-23. There were seven ties, but DU never led in the set. Denver hit .243 in the set with 17 kills. Principato paced the Pioneers with five kills in the set, while Boteju had eight of Denver’s 15 assists in the set. Baird and Boteju each had three digs to lead DU, and Boe and Boteju each had a service ace in the frame.

Set Three: In the pivotal third set, the Pioneers started out with the early advantage, using a 4-0 run to take a 7-4 lead. DU maintained a three-point lead throughout much of the set, but the Pioneers stretched the lead out to six at 17-11 thanks in part to a 3-0 run on errors by the Golden Eagles. The Golden Eagles used a 3-0 run of their own to cut the lead back to three at 17-14, however, DU then proceeded to go on a 5-0 run to push the lead to eight at 22-14. In that 5-0 stretch, the Pioneers recorded three blocks with Willis having a solo and an assisted block with Principato, and Principato, Baird and Boe combining for a stop. ORU fought back with a 5-1 run to make it 23-19, but Willis closed the set with back-to-back kills to give Denver the set at 25-19.  Willis hit .667 and had six of Denver’s 13 kills in the set. As a team, DU hit .312. Boteju and Anderson each had five assists, and Boteju led the Pioneers in the set with five digs as well.  The team had 5.5 total team blocks in the set, with Boe having two assisted blocks (one with Latham and one with Baird), and Willis and Principato joining on a block. There were four ties (all within the first eight points) and one lead change (at 5-4 Denver) in the set.

Set Four: It was back-and-forth early on with 11 ties and five lead changes, before Denver was able to build a two-point lead off of kills by Boe and Teal Schnurr at 13-11. From there though, it was all Pioneers. Denver built a five point lead at 18-13 that grew to nine at 24-15 after a 6-2 run, including four straight points by the Pioneers. The Golden Eagles fought off match point to make it 24-16, but Willis sealed the set at 25-16 and the title for the Pioneers with the kill, her 15th of the match.  Willis and Baird each had five kills in the final set, and as a team, Denver hit a match-high .586 with a match-high 18 kills.   Willis was a perfect five-for-five in the set and Baird hit .571 to lead the Pioneers.  Anderson had nine of the team’s 18 assists in the frame and Rooke added three more digs to her total.  DU had four assisted blocks with Schnurr and Boe combining on a block, as did Baird and Willis.

The Golden Eagles climbed back into the match by winning a tight second set, 25-23, but could not derail the Pioneers playing in front of their home fans.

Laura Milos was hitting from everywhere on the court and finished with a match-high 25 kills, while hitting for a .333 average, but ORU could not slow down the Pioneers’ middle attack. The senior recorded her 11th double-double of the season adding 10 digs.