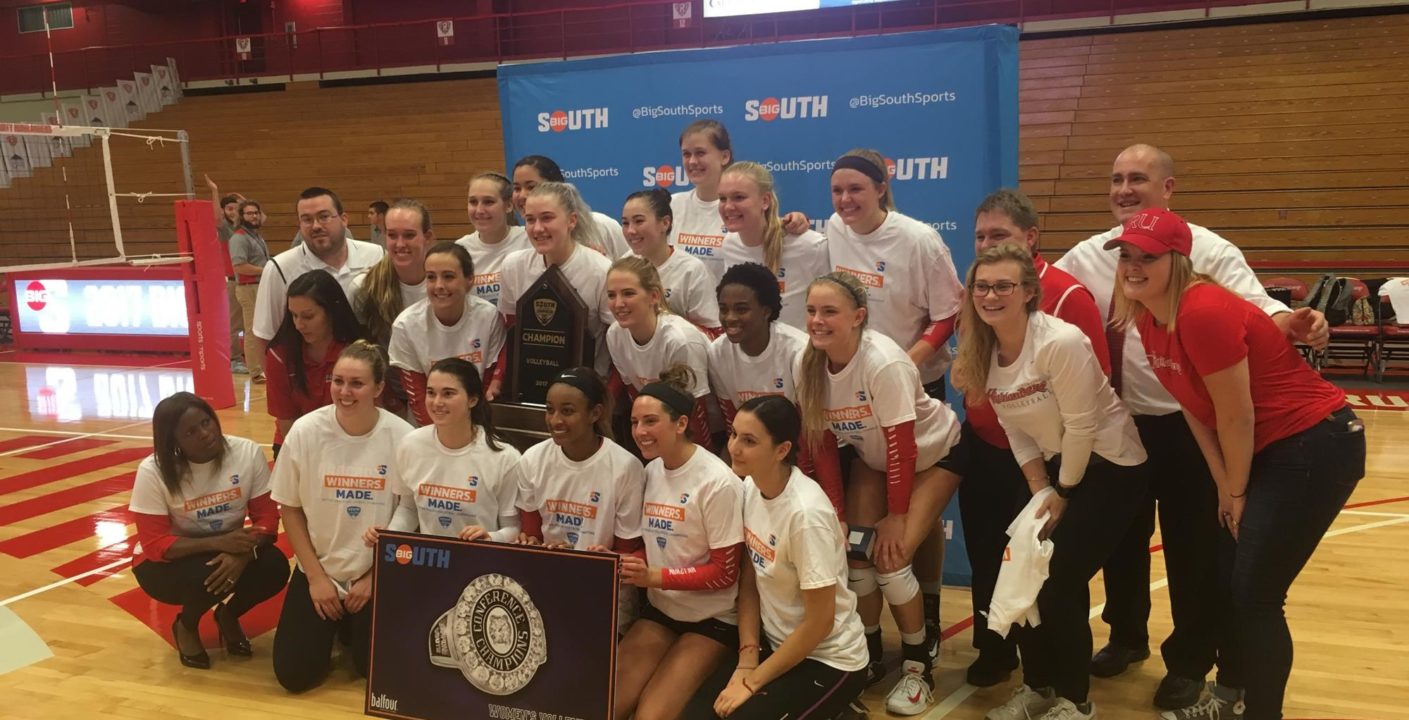 RADFORD, Va. – For the first time since 2013, Radford qualified for the NCAA Tournament by earning the automatic bid from the Big South Conference with a four-set victory over 1-seed High Point. It is also the fourth time in school history that Radford has qualified for the NCAA Tournament. Radford also snapped HPU’s program record 19 straight victories.

High Point (RPI: 44) will now have to wait for the Selection Sunday broadcast to see if they made the NCAA Tournament. The Panthers were led by Big South All-Tournament honorees Jenna Smith (28 assists, 5 digs) and Carly Jimenez (19 assists, 5 digs). On the attack, High Point got 13 kills and 17 digs from Haley Barnes. Katie Doering added a career-high 12 kills for the Panthers. Libero Abby Bottomley paced the floor defense with a team-high 18 digs.

The second-seeded Highlanders (25-4, 13-3 Big South) took the first set, but only after back-and-forth from both teams. Midway through the set Radford had a 13-12 lead when Molly Livingston tied it at 13 with a kill. The run started there and was not over as the Panthers (24-7, 16-0 Big South) took a 20-13 lead in the set. An attack error by Jenna Smith ignited a 7-0 Radford run, which knotted the top-seeded teams at 20. The 7-0 spark turned into a 9-0 run with back-to-back kills from Maddie Palmer. With the Highlanders ahead 22-20, High Point never regained the lead and Palmer’s 10th kill of the set clinched the 25-23 first set victory.

The second set was all Highlanders as they won 25-18 taking a two set lead. High Point took a lead early in the set, but Radford came back to take a 10-6 lead. The Highlanders improved to a 20-11 lead thanks to a 10-5 run. High Point scrapped back keeping it close, 20-14. Radford scored five of the next nine points (25-18) putting them only two sets away from a title. In the set, the Highlanders tallied 17 kills with a .421 hitting percentage.

In the third set, there were 21 ties and seven lead changes and neither team pulled away until late in the set when High Point took its first two-point lead, 23-21. The Highlanders fought back and tied the set at 23, but could not control a lead as the Panthers claimed the set, 26-24.

The fourth set began like the first and third as neither team could pull away until Radford scored four unanswered taking a 17-13 lead that forced High Point to call a timeout. The lead increased to seven, 23-16, as the Dedmon Center was rocking and the Highlanders envisioning lifting the trophy for the first time since 2013.

High Point scored one more point (23-17) and none other than Palmer put the Highlanders one point away from going to the NCAA Tournament with her career tying 26th kill of the match. Amaya Rousseau and Stephanie Neast made the dream a reality with a block off an attack from Haley Barnes, securing the Big South Championship and propelled Radford to an automatic qualifying spot in the 2017 NCAA Tournament.

INSIDE THE BOX SCORE
•  The Highlanders will return to the NCAA Tournament for the second time in five seasons and fourth time in school history.
•  This match featured 44 tied scores, including 21 in a back-and-forth third set, and 16 lead changes.
•  Maddie Palmer came up big when it mattered most, posting a season-high 30 points in the championship match to surpass her previous high of 25 against Presbyterian on Oct. 7.
•  Palmer tied a career-high with 26 kills in the match.
•  Radford had themselves a block party on the court, earning 10.0 team blocks compared to High Point’s one. Five of the Highlander’s blocks came in the fourth set alone.
•  Mallory McKnight and Stephanie Neast each had five block assists each.
•  Senior Kaylor Nash had a team-high and game-high 19 digs.
•  Haley Kleespies‘ passing was on point against High Point, leading all players with 48 assists. High Point had 51 assists as a team.
•  Radford put together a .327 hit percentage while holding the Panthers to a .218 hitting percentage.
•  Freshmen Alyssa Carruth and Jordan Coomes came up huge and tallied a combined 20 digs, with each freshman contributing 10 of her own.
•  Kleespies, Valerie Gonzalez and Palmer were named to the 2017 Big South All-Tournament Team. Palmer was named the tournament MVP.

QUOTE
“We had a gameplan and our kids did it to perfection tonight. I’m so proud of all of them. We made some adjustments that we had been working on for about four weeks in practice and they paid off. It was something that the coaching staff decided to change in order to generate some more offense. It came down to our kids executing the change. They trusted us and what we had to say and executing it to perfection. It was an awesome all-around team effort. Chris (Hertel) was great with the blocking and Caleb (Adams) was making sure our kids were doing the right thing service wise. Defensively, I thought our diggers were in the best spots possible. This is a huge win for our program.”~ Radford head coach Marci Jenkins

RADFORD, Va. – The High Point University volleyball team built a first-set lead, but Radford stormed back to take the set and carried the momentum throughout the match taking the contest, 3-1, on Sunday in the Dedmon Center.

“Honestly, I didn’t think we played all that well yesterday so I was hoping we would improve on some of the things we didn’t do while continuing to block well,” head coach Tom Mendoza said. “But it kind of went the other way tonight because our block wasn’t very good. We have to credit Radford because they looked comfortable and played as well as I’ve seen them play all year. A lot of it was things we could’ve done better and we saw the result of losing some of our core principles.”

In her final Big South match, senior Haley Barnes racked up a double-double with 13 kills and 17 digs on the evening. Meanwhile, freshman Katie Doering notched her career high for the third straight match with 12 kills.

From the back row, freshman Abby Bottomley tallied a team-high 18 digs as the Highlanders obtained a 67-60 edge in digs.

Overall, Radford outhit the Panthers .327 to .218 in the contest. HPU out-served the Highlanders with eight aces compared to five from Highlanders.

After a seesaw start that saw the teams tied at 13-all midway through the opening frame, HPU inserted Pilat into the lineup to serve. The senior, who missed the 2016 Big South Championship due to injury, responded serving up an 8-0 run featuring three aces to give HPU a 20-13 lead.

Playing in front of a raucous home crowd, Radford kept up the pace hitting .421 en route to taking the set 25-18.

In the third frame, neither team built a lead larger than two throughout the whole set as the two squads were tied 24-24. Barnes, then, gave HPU a lead with her 10th kill before Tylman closed the 26-24 win for the Panthers.

Once again, the score was knotted at 13-all before a 4-0 run from the home team gave Radford control. From there, HPU couldn’t get any closer than three as the Highlanders wrapped up the match with a 25-17 triumph.