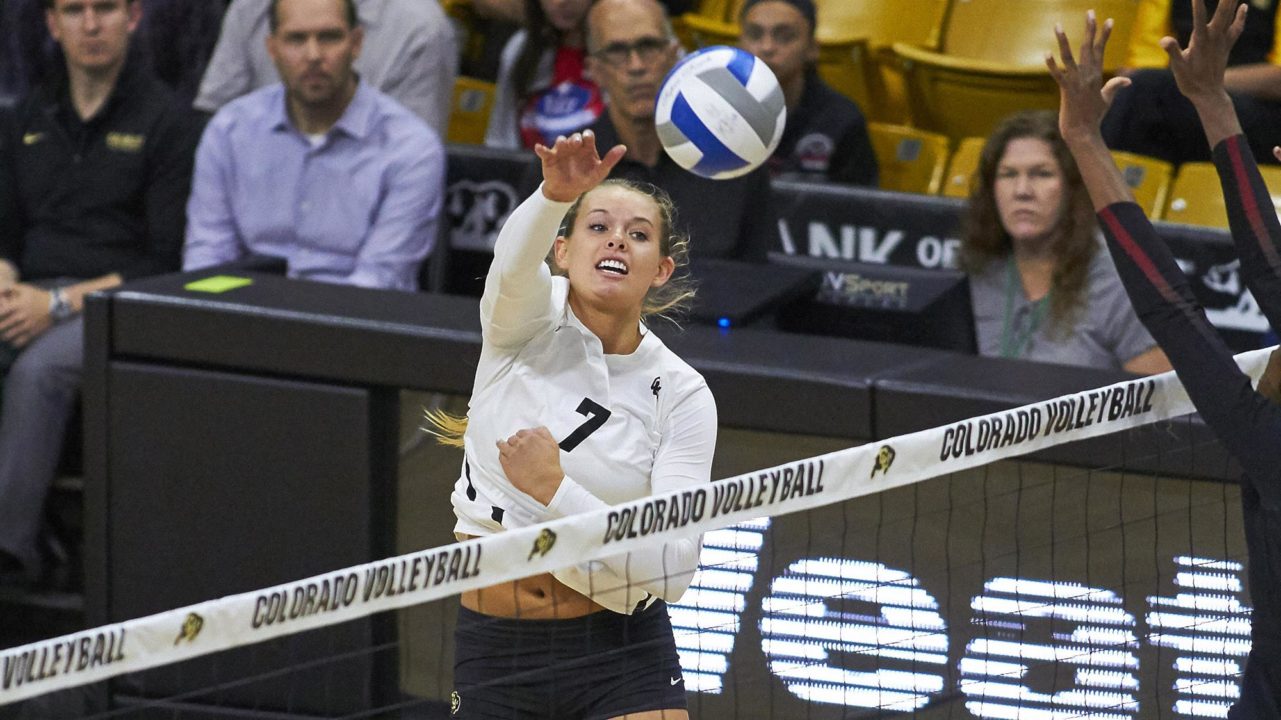 17th win for Colorado is already three more than all of 2016 combined. Current Photo via Colorado Athletics

The visiting Colorado Buffaloes rolled into Corvallis and finished off an impressive four set win over a hot Oregon State Beavers’ squad. Set scores were 25-23, 20-25, 25-23, 25-12. Alexa Smith had a big night, finishing with 19 kills and 16 digs, while Naghede Abu and Frankie Shebby chipped in 14 and 13 kills respectively. Setter Brynna DeLuzio dished out 47 assists while Gabby Carta-Samuels paced the defense with 22 digs. Colorado picked up their 17th win of the year, already surpassing the 14 wins in they had in all of 2016. The Buffaloes will return to action on Wednesday, November 1st to host Washington State.

The Beavers received a huge effort from Mary-Kate Marshall who collected 20 kills and 15 digs, while Maddie Goings tallied 18 kills. Setter Kylee McLaughlin dished out 51 assists while libero Grace Massey collected 16 digs. The loss ended a five match winning streak for the Beavers who drop to 16-8 (6-6 PAC-12) and will return to action on Friday, November 3rd when they travel to face #2 Stanford.

CORVALLIS, Ore. — Colorado improved to 17-6 overall after a convincing 3-1 victory against Oregon State (16-8) on Saturday night in Gill Coliseum. The win over the Beavers completed the season series sweep of the Oregon schools as CU upset No. 15 Oregon on Friday night after defeating both programs in Boulder last month.

WHAT HAPPENED: Junior Alexa Smith led Colorado with 19 kills and added 16 digs for her 13thdouble-double this season. Naghede Abu was second on the team with 14 kills. She hit an outstanding .583 with no errors on 24 attacks. Frankie Shebby added another 13 kills and tallied just two errors on 35 swings (.314).

Gabby Carta-Samuels was busy in the back-row for the Buffs, recording a match-high 22 digs. Abu led CU at the net with four blocks, while Smith and Joslyn Hayes each added another three blocks.

SET 1: The Buffs were a little slow to start the match, allowing OSU to take a 9-4 lead. CU used a timeout and was able to string together a 7-1 run to go up 11-10. The two sides battled down the stretch. The score was tied 17-17 when the Buffs recorded four straight points to take a 21-17 advantage. OSU rallied to get back within a point at 23-22, causing the Buffs to use a timeout. CU hung on and finished the set 25-23.

SET 2: Colorado got out to slow start again the second set. The Buffs were down 5-1 when they rallied back to even it up at 5-5. CU took its first lead of the set at 8-7, but OSU responded with a 4-0 run to go back up 11-8. After a CU timeout, OSU increased its lead to seven (16-9). The Buffs were able to get back within four points (24-20), but it was too late as the Beavers finished the set on the following point.

SET 3: The third set was much closer at the start. OSU led the game 11-9 when the Buffs tallied four straight points to take a 13-11 lead. The frame would be even again at 15-15, but after a pair of points for CU, OSU called a timeout. The Beavers sided-out on the following point (17-16) and eventually retook the lead at 21-20, causing the Buffs to spend a timeout. CU responded out of the break with two straight points, which included a kill from Smith (22-21), forcing OSU to take a break of its own. The Beavers tied the set up on the next point, but CU used a 3-1 run to close the set 25-23.

SET 4: Colorado recorded a strong start to the fourth set, going up 7-3 before OSU took a timeout. The Buffs kept attacking and increased their lead to six at 13-7, causing OSU to take its second timeout. Out of the break, CU continued to attack, taking the next five points to go up 18-7. The Beavers could not slow the Buffs down and CU took the set 25-12. The Buffs hit a blazing .600 in the final set with 16 kills and four errors on 20 attacks.

NOTES: For the first time in school history, the Buffs defeated Oregon State and Oregon both at home and away…CU is 10-4 this season away from Coors and has won five of its last six matches…The Buffs are 9-4 against the Beavers and are 3-3 in Corvallis…Colorado has eight matches remaining in the regular season, which includes five at the Coors Events Center.

NEXT UP: The Buffs will have a quick turnaround as they head back to Boulder. The week starts early on Wednesday, Nov. 1, with a 7 p.m. rematch against Washington State. Then on Friday, Nov. 3, CU will host Washington at 6 p.m.

“It was great to get the sweep on the weekend. The Oregon schools are really tough and are playing some really good volleyball. We started out a little rough, ball-handling-wise. By the time we were in set three, we were in a pretty good groove and when we got that win, we kind of rolled over them in set four.”

About what happened in set two

“We couldn’t pass. Oregon State is good. They capitalized on it like any team in the Pac-12 would. They have two great outside hitters we couldn’t slow down until set four. When they are both going off, it’s tough to compete

CORVALLIS, Ore. – Mary-Kate Marshall converted 20 kills and Maddie Goings added 18 but the Beavers fell for the first time in three weeks to Colorado, 3-1. In the process, Oregon State’s five-match win streak, the program’s longest conference win streak since 1990, came to a halt.

“That was a disappointing result,” head coach Mark Barnard said. “We lacked our normal energy and missed some opportunities at important moments. We just didn’t have an answer for the physicality of their middles and it was a difference.”

Oregon State led 9-4 early in the first set but the Buffs forced their way back into the game and tied the score at 10-10. Play remained back-and-forth and it was a tie game at 17 before Colorado seized the lead for the final time holding off the Beavers 25-23.

OSU came back in the second pulling away from an 8-8 tie to take an 18-12 lead. From there the Beavers held serve to seal the set at 25-20 and evened the match at one set apiece heading to the intermission.

The third set was close throughout with 15 ties and six lead changes. Neither team could establish as much as a three point lead at any juncture. However, with the Beavers unable to establish a rhythm the Buffaloes stole the set 25-23.

The Beavers struggled in the fourth set as the Buffaloes used an 8-0 run to take a 18-8 advantage.

“We’ll have to re-focus for next week. We won five in a row and teams are definitely not taking us for granted so we’ll have to bounce back on the road at Stanford and California and those are very good teams at home,” Barnard said.

Game Notes: Mary-Kate Marshall led the Beavers with 20 kills. It is the 22nd time in 24 matches Marshall has led the Beavers in kills … Marshall also recorded the ninth double-double of the season with 15 digs to go with her 20 kills … three Beavers registered double-digits in digs with Grace Massey pacing the Beavers with 16 digs, Marshall posted 15 and Kayla Ellis tallied 13 digs … Kory Cheshire led the squad with five blocks.

Next Up: OSU returns to the road next week with a trip to the Bay Area. The Beavers take on Stanford Friday at 7 p.m. and are at California Sunday at 1 p.m.