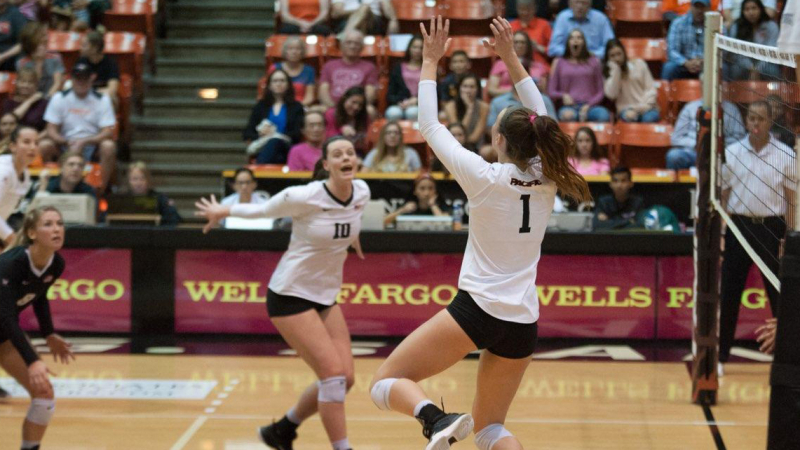 Graduate transfer Andie Shelton will be part of the 2018 Duke volleyball roster after leaving Pacific for the Blue Devils’ program. A setter and outside hitter, Shelton will have one year left of play and is immediately eligible for the fall season.

Shelton spent four seasons at Pacific, starting out with a bang in 2014 as a WCC All-Freshman team performer. She did not appear in matches in 2015 though, instead redshirting, before totaling 7.48 assists per set in 2016. Then, in her most recent campaign as a junior, she was All-WCC Honorable Mention and recorded per set numbers of 5.12 assists, 2.73 digs, 2.30 kills and 0.82 blocks.

A native of Stockton, California, Shelton prepped at Ripon Christian High School and with Delta Valley Volleyball Club. Her performance earned her distinction as a 2013 Under Armour All-American.

“The addition of Andie Shelton to our 2018 team gives us a talented and experienced setter who is also an offensive threat,” Duke head coach Jolene Nagel said in the release of the addition. “We’re delighted to have someone with her talent, experience and maturity join our program. Andie is a team player with a team mentality that everyone loves to be around. Her athleticism, skill and high volleyball IQ will be a positive impact.”

Bringing on Shelton gives Duke four players who can fill the setter position in 2018 with seven now who can slide into the role of outside hitter.

The first chance for Shelton to perform in a Duke uniform will be on August 24 and 25 in matches against BYU. The Blue Devils are coming off of a 19-12 performance in 2017 in which they went 11-9 in the ACC.

Join us in welcoming @andie_shelton1 to the 🔵😈🏐 family