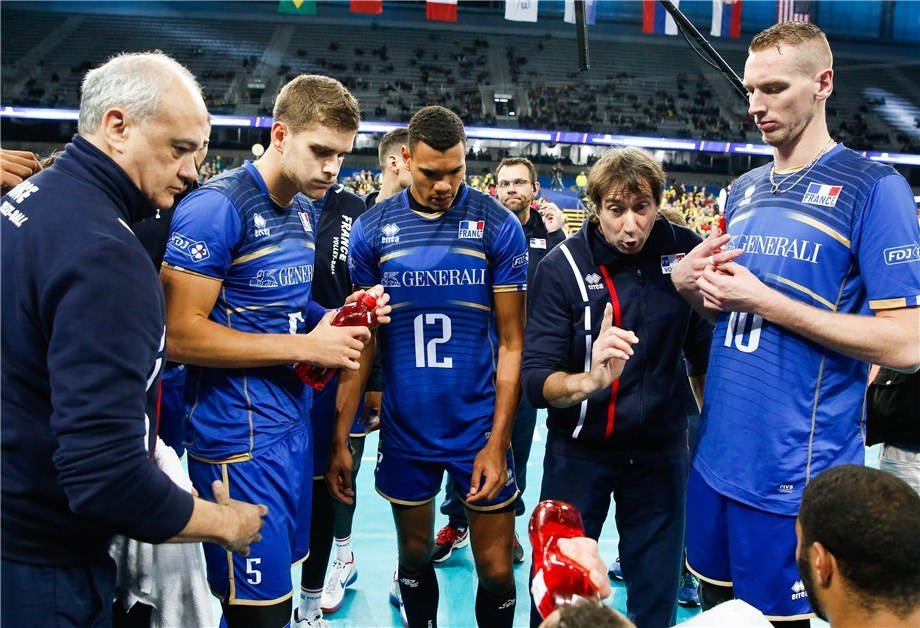 France has played all tournament long with an understated confidence that will serve them well in a hostile arena. Current Photo via FIVB

In spite of the threat of cold temperatures, the championship match of the 2017 FIVB World League will brave the late night in Curitiba, starting at 11:05PM local time (with the 3rd-place game, 3 hours earlier, at 8:00PM.

While this year’s World League was a wild affair, with upsets and swings of fortune abound, the right two teams have ultimately landed in the World League final. The 2016 Olympic champions Brazil, and the 2015 World League champions France, will meet on Saturday.

Brazil has the most starpower of any team in this year’s World League, especially with fellow Olympic medalists from Italy and the United States sending young rosters that are shells of their A teams to this year’s event. France was the most dominant in pool play and has been the most consistent team, in spite of playing the majority of the tournament with their most creative player and biggest star, Earvin Ngapeth, who finally clicked in their semi-final game against Canada.

Brazil, the most decorated team in the 28-year history of the tournament, has been to the championship match 15 times, and won 9 of those. For France, this will be just their 3rd trip, with a 1-1 record.

This won’t be the first time the teams have met – they also played in the 2006 final in Moscow. That match was an instant classic and one of the best World League finals in history. No single set was decided by more than 3 points, with Brazil eventually coming out on top 3-2.

France and Brazil have avoided each other so far in this year’s World League, which leaves plenty of suspense. Brazil has a decided and definitive size advantage, but thanks to injuries mounting on the Brazil side, France has more weapons on their bench to work around. With the emergence of Stephen Boyer in this year’s tournament, the return of Ngapeth, and Julien Lyneel’s Final 6 surge, France has options if their offense struggles.

But Brazil is…Brazil. They’re the most dominant team in volleyball history. In Brazil, soccer is the national religion, but volleyball is the national sport, and the Brazilians will be playing in front of 40,000+ home fans that will pull them with every punch.

But it’s a new team for Brazil – not the same one that won in Rio.

“I’ve always worked hard to be ready to do my best when the team needs me,” Brazil’s key new lead outside hitter Mauricio commented. “I knew my time would come and this is a very important moment for me. It means a lot helping the team to get to the final again and this time at home, in such a beautiful atmosphere here in Curitiba.”

“We are creating a new identity for this group after some changes following the Olympic Games”, Mauricio added. “We get better after each match and we are adding more intensity to our game. We’ll need to play our best game in the final and bring to the court everything we worked on for the past several weeks”.

France has a different outlook, one from their coach Laurent Tillie, once a superstar himself, that has clicked with the current French roster – they’re grateful to be here, admirable of their opportunity, but not in a fearful way – in a way where with a wry French wink, they’re so confident that they don’t need to talk about it.

“We wanted to play against Brazil in the final”, he said. “It is a revenge for us because last year we did not play well in the Olympic Games. It will be difficult, Brazil are a complete team. We will need to play at 200% against them.”

It’s tempting to take Brazil, to take the story of rewarding the home crowd for the second straight year after their Rio Olympic win.

France has been too scrappy, too good, and has too many weapons outside to be beat. So long as they play up to where they’ve been for most of the tournament, and not down to the level they were at in their Final 6 opener against the United States, then this is France’s match to lose. They’ll have to embrace the role of the villain, and withstand Brazil’s initial surge of emotion, but this is France’s match to lose.

A NORCECA border battle will decide the bronze medal match between the United States and Canada. Both teams were surprises to make the final 6, but with that momentum heading into this week’s play, less surprising to advance to these semi-finals.

Both teams have young phenoms with high potential. Canada’s young phenom is the youngest and has the highest potential of those – the high-flying Sharone Vernon-Evans gets better with every game played, and the teenager is already ear-marked as a global superstar of the future.

For the United States, that’s the uber-athletic Ben Patch, who has showed off his raw ability in this year’s World League, but has been inconsistent and struggled to put together complete games.

The Americans, though, are more experienced, and with Micah Christenson at setter, can find more avenues to offense. We like the Americans in a 3-1 outcome, though this rivalry could be better in the coming years than it’s been the last few.