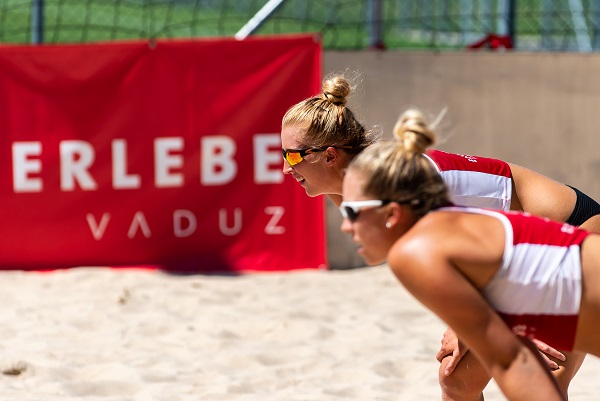 Dorina and Ronja, Austrian natives, competed successfully in all kind of sports before finally settling in what would appear to be an uncommon choice for people stemming from a landlocked country. Current Photo via CEV

Florida International Univerity’s Klinger sisters took a long road before finally becoming beach volleyball stars. Dorina and Ronja, Austrian natives, competed successfully in all kind of sports before finally settling in what would appear to be an uncommon choice for people stemming from a landlocked country.

Dorina, the elder sister at 21-years-old, played indoor volleyball for four years, participated in track and field for three and alpine skiing for ten back in her home country. She also sporadically participated in tennis, swimming, and windsurfing competitions. Meanwhile, Ronja the younger sister at 18-years-old, participated in all of the previous activities as well, in addition to being a national pole vault champion a 2x Austrian volleyball league MVP (2017, 2018). Needless to say, the sisters have a lengthy sport resume.

Here is what they had to say of their very fertile sporting background and how their fraternal relationship translated into success in the court (Cev.lu):

“We were both quite successful in skiing and were nominated in various junior National teams. Now we have been playing Beach Volleyball for two and a half years, but this is our first season together as a team. We like Beach Volleyball, because it is a great combination of an individual and team sport. In such a small team you still have to be a great fighter individually to be successful, you have to find solutions on your own as well. This is probably something we learnt from skiing.

Our mom was an athlete, our father is a sports scientist, but now both our parents run a ski school. Of course they were not enthusiastic at the beginning, when we switched to the beach, because they had invested a lot in the school and we as skiers were quite successful. But now they fully support our “new” sport. Our father trains us often – even if he is not a volleyball specialist, as a sports scientist he can still bring us forward in many areas.”

It is like with best friends – sometimes you step on each other’s nerves. But we do understand each other very well and it is a kind of blind trust you can only have with your sibling, thus we see more advantages in playing together.”

Although the Klinger sister have only been playing beach volleyball for about three years, they managed to secure the fifth place at the 2018 U22 Beach Volleyball European Championship in Jurmala two weeks ago and the 1-Star/Satellite Baden held earlier this year in their home country. At the 1-Star/Satellite Vaduz, the girls were among the four pool winners.