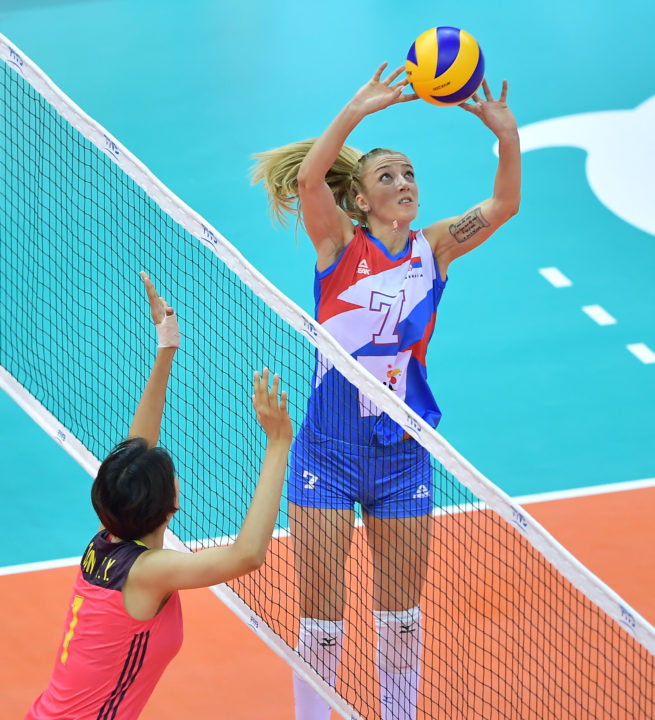 FIVB claims that Antonijevic's clenbuterol contamination was food related. Is this good news for Italian Miriam Sylla, who also claimed that her clenbuterol positive test was due to eating contaminated food in China? Current Photo via FIVB

After winning CEV’s EuroVolley competition, Serbian volleyball fans were have been gifted with one more reason for celebration. According to Serbia’s Volleyball Federation website, the FIVB has lifted Ana Antonijevic‘s suspension for a positive drug test. Antonijevic was tested in 2017 FIVB World Grand Prix in Nanjing, China and was positive for clenbuterol, which caused her to miss Serbia’s gold medal campaign at the 2017 CEV European Championship in Azerbaijan and Georgia.

An analysis of Antonijevic’s test led the FIVB to conclude that it was as a result of tainted food. According to FIVB’s decision, Antonijević, is cleared to compete for the Switzerland’s Volero Zürich in the upcoming season, effective immediately.

This is potentially good news for Italian Miriam Sylla, who also got tagged with a clenbuterol related doping suspension after being tested in the same tournament. The Italian Federation (FIPAV) requested a doping test counter-analysis, claiming that clenbuterol entered her system through the food.

Clenbuterol is believed to be common in the Chinese food supply, with a 2011 outbreak in pork products being the most notorious. When three-time Tour de France (cycling’s premier road race event) winner Alberto Contador tested positive for the substance in 2010, he blamed it on having eaten food in China.

The drug is usually prescribed in some countries to people with respiratory issues, such as severe asthma. Most athletes use it as a performance enhancer for an increase in aerobic capacity, central nervous system stimulation, and oxygen transportation.The drug is so strong that most countries only allow it for veterinary use. In the US, Clenbuterol is not an ingredient of any therapeutic drug approved by the US Food and Drug Administration.