Florida Punches Ticket to Sweet 16 with Sweep of FGCU 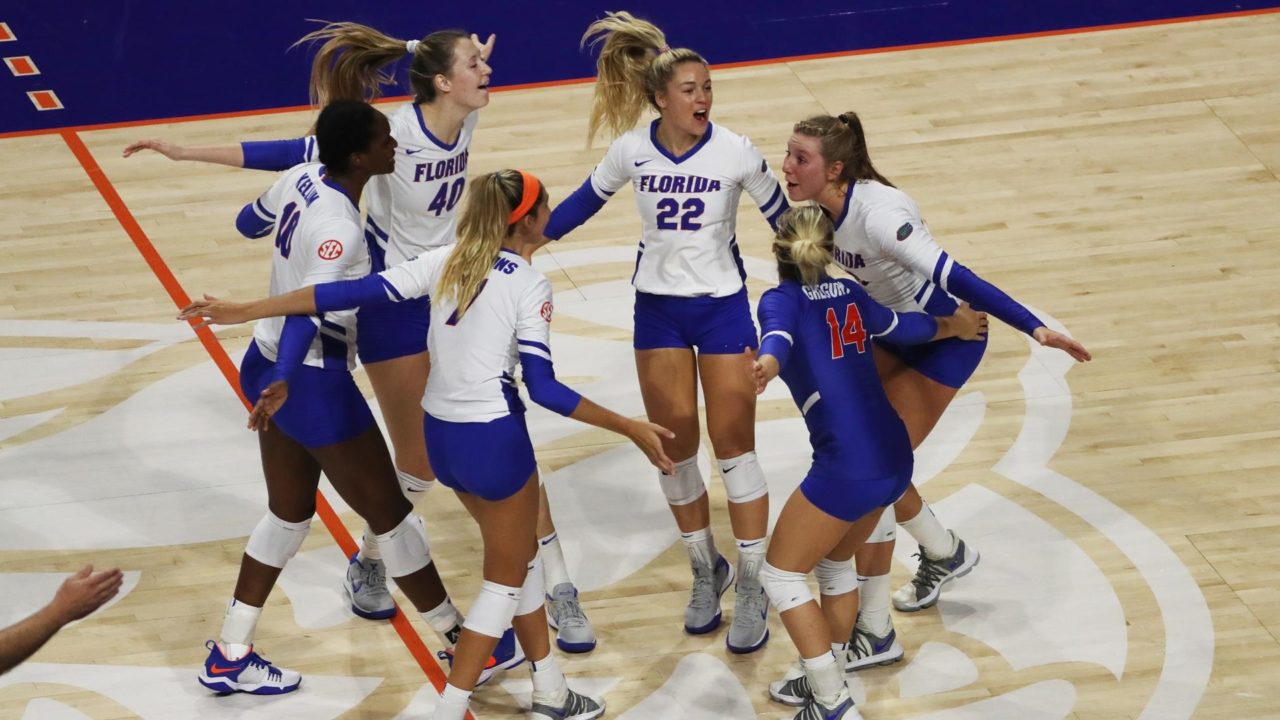 The Florida Gators swept the Florida Gulf Coast Eagles on Friday night in The Venue during the second round of the NCAA Tournament to advance to the regional semifinals for the 24th time in 29 previous tournament appearances.  Current Photo via Florida Athletics

ORLANDO, Fla. – The No. 16 Florida Gators swept the Florida Gulf Coast Eagles on Friday night in The Venue during the second round of the NCAA Tournament.

The Gators are moving on to the Regional Semifinal round for the 24th time in 29 trips to the tournament – all 24 coming under Mary Wise.

End your night by watching the highlights & listening to the calls from tonight's SWEEP over FGCU to advance in the #NCAAVB Tournament!

Florida hit .356 as a squad, the sixth-best percentage this season. Paige Hammons led the offense on Friday night, posting 14 kills on the night. Holly Carlton followed with nine of her own and Rachael Kramer pitched in seven.

Allie Monserez dished a team-leading 20 assists – her 30th time leading the Gators in that category this season. Marlie Monserez also added 16 assists on the evening.

Allie Gregory led the backcourt defense for Florida, posting 16 digs on the evening. That was her 29th time leading the Gators in digs this season. Paige Hammons followed with eight of her own and Paula Cerame added seven.

As a squad, the Gators notched 7.0 blocks, led by a team-best five by both Holly Carlton and Taelor Kellum.

The Gators now await to see how the bracket plays out in the remainder of the first and second round matches to see where they travel for the Regional Semifinal.

“After Friday and Sunday matches, when we’re on the floor doing autographs, we are meeting people from all over the state. Maybe there were many Gators fans that did not have to travel that far. This is a great venue for volleyball – the size of it. Credit Gator Nation for the atmosphere this evening.”

“This crowd was great – it honestly felt like a home match. You look around and just see Orange & Blue throughout the entire stadium. I cannot thank Gator Nation enough for them to come down all the way to Orlando. That is what pushed us over the edge this weekend – their support was incredible.”

“Having our band here was great. We get to hear all of the chants going, it brings a familiar feeling. It was really awesome.”

The defending national runner-up Gators produced a starting lineup that included five players at 6-1 or above, including 6-8 Rachael Kramer and 6-7 Holly Carlton. They will advance to next weekend’s regional tournament, while the Green and Blue conclude the best season in program history.

“I thought Florida played tremendously well,” FGCU head coach Matt Botsford said. “They served the ball great. That was really the story of the match and put us in some pretty big holes pretty early in each of those sets. I was really impressed with that. I don’t think we were as prepared for that facet of their game, and they did it extremely well. We knew they were going to be big and physical at the net, but I thought the way they managed from the service line and their first contact had us on our heels from the beginning.”

“Our players would have liked to have performed at a higher level in an environment like this, but I know they gave everything they had,” Botsford said. “We just didn’t execute. I’m certainly proud of the effort and trying to take a step back and reflect on the job they’ve done all season and really celebrate that.”

Early on, FGCU handled any nerves they had pretty well by jumping out to a 7-3 lead. Florida responded with five straight to force a timeout before the teams went back-and-forth with the Gators holding a 15-14 lead midway through the set. At that point, however, four straight kills spurred a 9-1 run for Florida that allowed them to eventually claim the opening set.

The teams exchanged the first four points of the next set, but Florida scored four straight and 14 of the next 19 to seize a 16-7 lead. Following that, they closed the set on a 6-2 run to take a 2-0 lead.

The final set featured a 7-0 run from the Gators late in the set after FGCU pulled within 17-15 on a kill from Snowy Burnam (Palm City, Fla./Jensen Beach HS). Paige Hammons, who had a match-high 14 kills over 32 attempts, sent Florida to the round of 16 with the match-winning attack.

FGCU concluded its season by tying the 2016 team’s Division-I era single-season wins record. It was the first NCAA Tournament appearance in program history, and they earned the conference’s first tournament win since 2003. Additionally, the team’s 16-match winning streak was snapped, but not before tying the Division-I era record – joining the 2012 and 2016 teams.

Rick (Alpharetta, Ga./Blessed Trinity Catholic HS) finished her career as the program’s all-time leader in assists (4,540) and matches played (131). She tallied double-digits in all every career match.