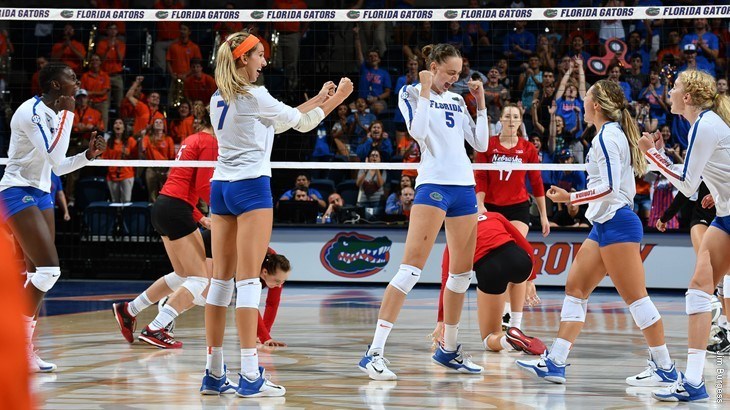 GAINESVILLE, Florida – Nebraska committed 30 errors in a five-set loss to Florida Saturday night, falling to 0-2 on the young season.

After a battle of big runs in the first four sets, the decisive fifth stanza followed suit. Florida surged ahead by scoring the first five points of the set including two kills by sophomore middle blocker Rachael Kramer. Nebraska answered with three straight points, but would get no closer than two the rest of the way. The Gators led 8-4 at the changeover, but the Huskers were within three at 13-10, forcing a Florida timeout. Kramer held off any hope for a comeback with two final putaways.

The Huskers played without junior setter Kelly Hunter for the second straight night, but still managed to outdo the Gators in kills (60-56) and aces (7-1). Florida outhit Nebraska .214 to .155 and put up 11.5 blocks to the Huskers’s seven.

Kramer pounded down 20 kills, while hitting at a .679 clip. Redshirt senior outside hitter Shainah Joseph was next with 11 kills, while senior middle Rhamat Alhassan and senior outside Carli Snyder chipped in eight kills apiece. Alhassan paced the team at the net with eight blocks, while Snyder contributed a match-high 27 digs and served up Florida’s lone ace. Redshirt junior setter Allie Monserez added 20 digs to her 41 assists, while senior libero Caroline Knop (17) and freshman outside Paige Hammons (11) followed.

Junior outside Mikaela Foecke led a trio of Husker hitters with double-digit kill efforts. Foecke posted a double double with 18 kills and 16 digs to go with a team-best four aces and four blocks. Freshman outside Jazz Sweet (16) and senior outside Annika Albrecht (11) were not far behind. Albrecht also managed a double double, adding 16 digs. Senior middle Briana Holman also was credited with four stuffs. Junior libero Kenzie Maloney pulled up a team-best 18 digs, followed by Foecke, Albrecht, and defensive specialists Sydney Townsend and Hunter Atherton, who each turned in 16.

Nebraska took the opening set as Florida hit at an .061 clip. The Huskers went ahead 11-6 early and never looked back, building an eight-point lead at 17-9. Five different Nebraska players turned in kills in the set. A Gator service error and an Albrecht ace capped the 25-19 win.

Florida turned the tables in Set 2, jumping out to a 16-5 lead, which Nebraska could not answer. Kramer put down six kills in the early run. Down 24-15, the Huskers thwarted three set points, including a pair of blocks by Holman, but a Hammons kill ended the stanza.

Set 3 put the Huskers back on top as the visitors cruised to an 18-8 advantage. Sweet accounted for four kills and Florida contributed five errors in the run. Back-to-back Albrecht putaways gave Nebraska the 25-17 victory.

The Gators rallied twice in Set 4, first with a 6-1 run to come back from down 5-2 with help from three Joseph kills, and next to pull away to go up 18-12 after a tie at 11. Four Huskers errors aided the second rally. Three Nebraska errors put Florida on the hill at 24-17, setting up a final kill by Monsarez.

It was far from pretty, but the No. 12 Gators did just enough force a fifth set. And they played stellar volleyball at the match’s most critical juncture to come away with a second consecutive victory over a top-five opponent, capping the two-day VERT Challenge with a win over No. 5 Nebraska Saturday (Aug. 26) evening.

Coupled with Friday (Aug. 25) night’s four-set triumph over top-ranked Texas, the Gators won consecutive matches against top-five opponents for the first time in program history. Florida came up short in its previous six attempts to achieve the feat.

Once again the Gators were stingy defensively, holding Nebraska to a .155 hitting percentage. After only holding two top-five opponents under a .160 clip since 1998, the Gators did it in both their matches this weekend, limiting Texas to a .156 hitting percentage Friday night.

The offense struggled much of Saturday, finishing with a .214 clip. But, in the all-important fifth set, Florida hit .455, with three-time All-American Rhamat Alhassan and sophomore middle blocker Rachael Kramer combining for eight kills on nine attacks.

Kramer amassed a career-high 20 kills and hit a remarkable .679. She added three block assists to total a career-best 21.5 points. Kramer, who also had 11 kills and 13.5 points in the win over Texas, was named the VERT Challenge’s Most Valuable Player.

Defensively, senior Carli Snyder notched a career-high 27 digs, giving her 47 for the two matches this weekend. Fellow senior Caroline Knop finished with 17 digs and six assists, while redshirt junior Allie Monserez logged a career-best 20 digs and racked up 41 assists for a double-double.

Mikaela Foecke had 18 kills and 16 digs for her second straight double-double to open the season. She took a career-high 59 swings, served four aces and tallied four blocks. Freshman Jazz Sweet followed up on her solid freshman debut with another impressive performance in her second match, connecting for 16 kills on 31 attacks for a .323 hitting percentage. Annika Albrecht had 11 kills, 16 digs and two aces, and Briana Holman had eight kills with four blocks. Her middle partner, Lauren Stivrins, had seven kills and three blocks.

A total of five Huskers reached double-digit digs, as Kenzie Maloney had 18, Sydney Townsend had 16 and Hunter Atherton had 16 to go with 43 assists for her first-career double-double.

Nebraska could not slow down Florida’s 6-8 middle blocker Rachael Kramer, who had 20 kills on 28 swings for a .679 hitting percentage.

Florida outhit the Huskers .214 to .155 and had an 11.5-to-7 edge in blocks. The Huskers outserved Florida with seven aces to just one for the Gators.

Set 1: Nebraska was sharp to begin the match, jumping out to a 6-3 lead with two kills by Foecke and one from Holman while Florida struggled with its attack. Holman hammered down an overpass for an 8-4 Husker lead, and a stuff block by Sweet and Stivrins made it 10-6. Atherton set Albrecht for an 11-6 Husker lead, and Sweet connected from the right side to make it 12-7. A kill by Stivrins, a block by Holman and Foecke, followed by a Holman kill and a Florida hitting error – all on freshman Hayley Densberger’s service run – increased the Huskers’ lead to 17-9 via a 4-0 run. Florida came out of a timeout and won the next three rallies, which forced a Husker timeout. Holman gained sideout for the Huskers briefly, and later Foecke connected from the right side for a 19-14 lead. A key dig by Maloney resulted in a kill by Sweet, and Foecke added another for a 21-14 edge. Maloney bump set Sweet for her fourth kill, which made it 23-18 Huskers. A Florida service error gave NU set point at 24-19, and an Albrecht ace immediately clinched set one for the Huskers. NU outhit the Gators .200 to .061.

Set 2: Sweet and Foecke struck for back-to-back kills to dig NU out of an early 4-2 deficit, but the Gators regained a 14-4 lead with a 10-0 run on the strength of the jump serve of Carli Snyder, which NU had difficulty passing. Kramer had four kills during the run. Nebraska trailed 21-9 before stringing together a 9-3 rally that included back-to-back blocks by Holman and three set points fought off. But Florida remained in control and won 25-18, outhitting the Huskers .239 to .140.

Set 3: Florida led 3-0 before the Huskers went on a 9-2 run. Sweet had three kills, and Holman had two to get the Huskers on top. The Huskers continued their strong play and increased the lead to 18-8 with a smash and solo block by Foecke on consecutive plays. The Gators cut it to 19-14 with a 4-0 run with Snyder on the service line, but that run ended when she served into the net, and Foecke followed with a kill before Florida hit long to give NU a 22-14 advantage. Albrecht gained set point for the Huskers and then clinched the set at 25-17 with back-to-back kills to give the Big Red a 2-1 lead.

Set 4: The Huskers went up 6-3 before Florida ran off five points in a row. A kill by Stivrins and ace by Townsend leveled the set at 8-8. A pair of Husker hitting errors gave Florida a 13-11 edge, and the Gators built the lead to 18-12 with a 5-0 spurt as Snyder served another UF run. The Huskers got out of the rotation with a kill by Albrecht but then committed a service error. NU trimmed the deficit to 19-15 but Florida responded to go up 21-15. The Huskers countered with two more points, but Florida closed the set on a 4-1 run to win 25-18 and force a fifth set.

Set 5: Florida won the first rally with a kill by Shainah Joseph, and that put Snyder at the service line. She served Florida into a 5-0 lead before the Huskers could get on the board. After kills by Foecke and Holman and a Florida shot into the net, Nebraska was within 5-3. But the Gators took an 8-4 lead as the teams changed sides. Trailing 9-4, Sweet got a kill and Foecke served an ace. But a Rhamat Alhassan kill made it 10-6 Gators. Stivrins posted a kill then teamed up with Foecke for a stuff to pull NU within 13-10. The Gators went ahead 14-10. Stivrins helped the Huskers stave off the first set point with a kill, but Kramer put the match away with her 20th kill.

Up Next: Nebraska plays its home opener on Friday at Noon against UMBC as part of the Ameritas Players Challenge. The Huskers will also play Oral Roberts at 7:30 p.m. on Friday and will finish the tournament against Saint Mary’s on Saturday at 2 p.m.