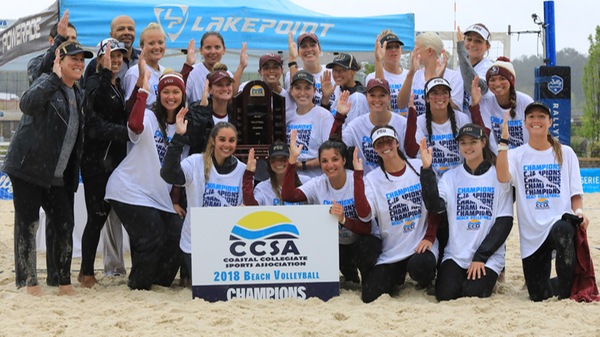 Florida State was the last team standing on Sunday as the Coastal Collegiate Sports Association beach season to a close... Current Photo via Florida State Athletics

Florida State was the last team standing on Sunday as the Coastal Collegiate Sports Association beach season to a close with two semifinal matches and a championship title.

With their third straight CCSA Beach title, the Seminoles became just the second program to win its conference championship three years in a row, following Pepperdine, which won the West Coast Conference Championship on Saturday.

The Seminoles closed out a 6-0 march through the CCSA Tournament with a 5-0 semifinal win over Florida International and finally a 3-0 win over LSU to clinch the title. FSU posted a 27-1 pairs record on the weekend, with the lone marr coming in a 4-1 win over LSU on Saturday.

The championship match was halted as soon as FSU clinched the third victory, leaving courts 1 and 4 undecided in very close three-set affairs, although four of the five matches went the distance.

FSU scored first as CCSA Pair of the Tournament Katie Horton and Hailey Luke won in straight sets on Court 2. Next to finish was a come-from-behind effort on Court 3, which went to the Seminoles Macy Jerger and Sara Putt, who overcame a 21-11 Set 1 loss to rally for a 21-15, 15-9 victory. It was Court 5 were the final hammer came down as Francesca Goncalves and Eva Torruella held on for a 21-17, 19-21, 15-12 win, capping the victory and clinching the title on a Tiger service miscue.

LSU reached the final with a 4-1 victory over South Carolina, winning in straight sets on Courts 1, 3, 4 and 5. Top duo Claire Coppola/Kristen Nuss picked up their 30th win of the year in the match with Gamecocks.

“Our semi-final match was a great match,” LSU coach Russell Brock said. “We needed to make a statement about who we are and where we stand in the East. To dominate that match under that pressure was very important. I’m really proud of the way we played. The final was an absolute battle. That test showed how much we’ve progressed, but also revealed some flaws that we have time to address. That’s the best thing about being pushed to the limit. It shows where you really are.”

The CCSA teams must now wait a week before finding out their NCAA Tournament fate, as the eight-team field in announced April 29. Both No.