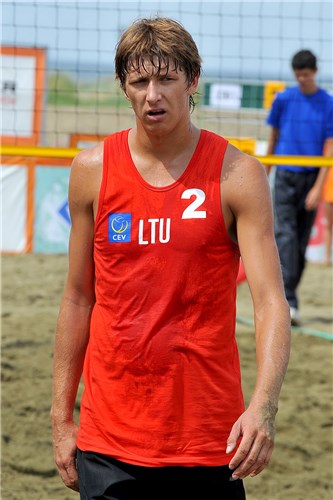 It has been reported by Monitoruldegalati.ro that Arvydas Miseikis, a former Lithuanian beach volleyball teen prodigy, has signed to play with Romanian club Arcada Galati.

Miseikis rose to beach volleyball fame when he, along his partner Arunas Kirsnys, won gold at the 2004 FIVB Beach Volleyball U19 World Championships by beating future indoor volleyball Polish greats Zbigniew Bartman and Michał Kubiak. While Bartman and Kubiak went on to have brilliant careers, Miseikis wasn’t quite able to replicate his youth success in his senior career either indoors or at the beach. After his world title, he became a volleyball nomad, playing in Lithuania, Cyprus, Belgium, Italy, and Austria, before finally enjoying a successful stint with France’s Rennes Volley 35 from 2013-2018.

Miseikis, 6’6″ in height, and now 30 years old, will join Galati as soon as next week. This will be his second stint in Romanian volleyball, having played for Tomi Constanta in the 2010-11 season, winning a Romanian Championship and Romanian Cup with the squad.

Arcade Galati has high ambitions for 2018, as it will defend its Romanian cup title for the first time in its history. It has also signed experienced Romanian libero Adrian Feher, 38 years old and winner of four Romanian Championships with Zalau Volley, to try to boost its roster.

Galati, which is also participating in the CEV Cup, currently sits in 3rd place of the Romanian League’s standings, with a 11-2 record.