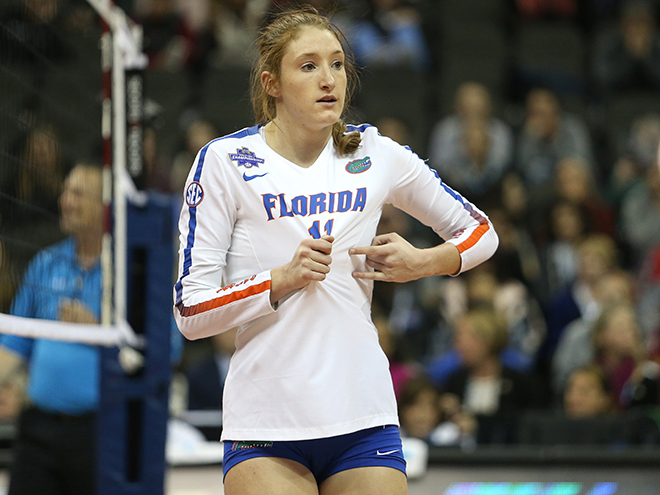 Former top recruit and Under Armour High School First-Team All-American Cheyenne Huskey is transferring from Florida to Texas State for 2018. Huskey was a sophomore this past season and henceforth will be a junior come 2018. She has already enrolled in classes and will be immediately eligible come fall.

A 6’2″ setter from Columbus, Texas, the move represents a homecoming for Huskey. She attended Columbus High School in the Lone Star state in addition to playing with Texstar and Houston Skyline on the club circuit.

“We are certainly happy to welcome Cheyenne to our Bobcat family,” Texas State head coach Karen Chisum said in the team’s press release. “Not only will she add to our depth at the setting position, but her blocking and attacking abilities are huge assets as well. Her experience at the next level is a plus as we continue our quest for the 2018 Sun Belt Conference Championship.”

Texas State is coming off of a 25-10 season in which they went 14-2 in the Sun Belt but were downed in the tournament championship match. They still made the postseason and attended the NIVC where they won their first match. Including Huskey, they now have three setters on their 2018 roster who will look to replace Erin Hoppe – their assists leader in 2017.

Florida meanwhile went 30-2 in 2017 and won the SEC along the road to the National Championship match. They had just two setters on their roster last year despite running a 6-2, making the Gators thin at the position with Huskey’s departure. Still, returning setter Allie Monserez will be joined by incoming freshman Marlie Monserez, her sister.

Go Bobcats
Go Bobcats all the way,
Keep that maroon and gold on high!
Fight on for every play
Until you hear that Bobcat battle cry!
We’re gonna cheer for our team today
Until the whole world knows our name.
No doubt about it,
We’re gonna shout it —
Bobcats will win this game!

The Gators did not run a 6-2 in 2017. They ran a “5-2”, according to Dave Boos. Unlike a classic 6-2, Cheyenne subbed into the setter position on the front line where she could use her height to advantage. I’m sure she’ll be a great asset for the Bobcats.