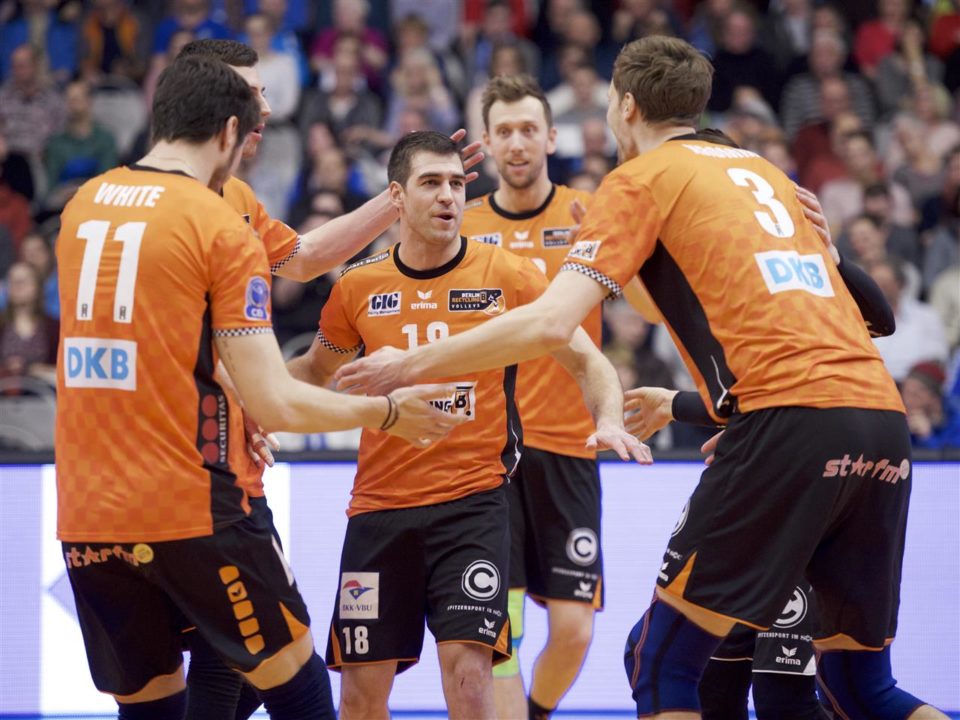 The BR Volleys won their 3rd-straight men's Bundesliga title last season, though it wasn't the smoothest of paths. Archive Photo via CEV

Germany’s top league, the Bundesliga, has announced its schedules for the  men’s and women’s 2018-2019 campaigns. The men’s league will kick off on October 13th, with the regular seasons running until March 23rd, while the women begin at the end of October, the 31st, and also play until March 23rd. That means approximately the same starting weekend as last season for the men, but the women will start two weeks later, which gives internationals from both sets of players about two weeks’ rest from the end of the FIVB World Championships which run at the end of this summer.

Since its release, the schedule has already been altered, especially to accommodate Champions League participation, with last year’s German vice-champions Stuttgart beginning their Bundesliga season on November 11th – 10 days later than most of their competitors.

The first mega-matchup on the men’s side between defending runners-up Friedrichshafen and defending champions Berlin Recycling Volleys will take place on November 15th at the ZF Arena in Friedrichshafen, which should be filled beyond its listed capacity of 3,822 spectators based on the teams’ recent rivalries. Friedrichshafen won both regular-season matchups by scores of 3-1 last season, and dominated the regular season table, but Berlin won the teams’ best-of-5 series in the playoff finals 3 matches to 2 to take the title home.

That made 3-straight German Championships for BR Volleys, and 6 in the last 7 seasons.

BR Volleys has loaded-up for the new season, especially by the addition of big-name Americans like Jeff Jendryk, Dustin Watten, and Kyle Russell, the announcement in the last week that Adam White would return to the side, the addition of German National Team libero Egor Bogachev, and the return of players like Ben Patch.

VfB’s additions have been less flashy; they added Michal Petras from Slovakia and a new s tarting setter Jakub Janouch, each on two-year contracts, plus the addition of Martin Kruger, but the team doesn’t seem to have replaced the talent it lost this off-season.

In the women’s league, a similar situation happened last season as the men’s, where Stuttgart topped the regular season over Dresdner, but it was SSC Palmberg Schwerin who swooped in and won the final in a 3-0 sweep over Stuttgart after doing the same to Dresden in the semi-final (2-0). Schwerin didn’t drop a single match on its way to the playoff championship.

Schwerin will first see Dresden on October 1st, and then will face Stuttgart on December 26th, the day after Christmas.