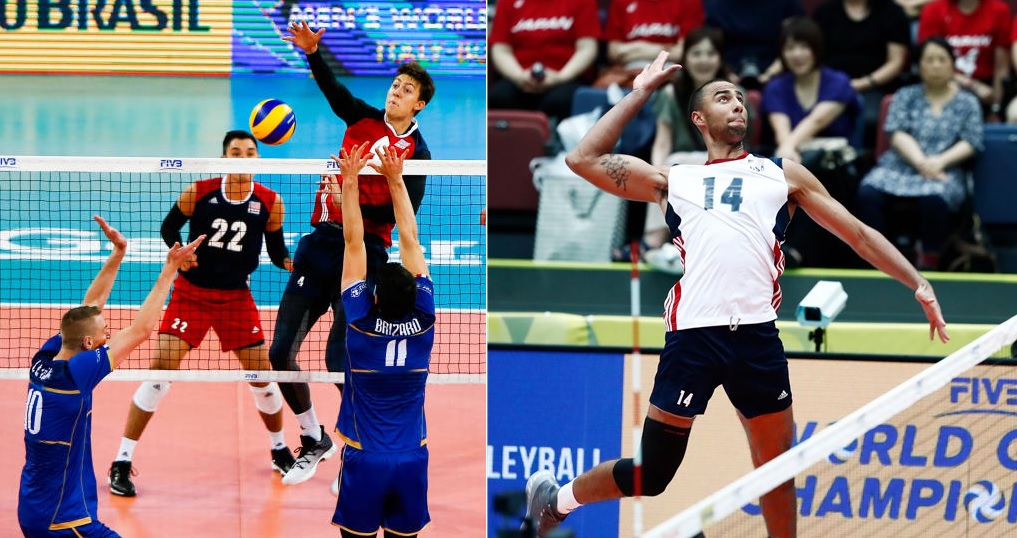 Jeff Jendryk will start his professional career in Germany with the Berlin Recycling Volleys. It is reported he will join Americans Ben Patch and Kyle Russell. Berlin has won the German Bundesliga the past 3 seasons.  Current Photo via FIVB

The Berlin Recycling Volleys are looking to claim a 10th German Bundesliga title and make another run deep into the CEV Champions League in 2019. They won their 3rd consecutive championship in 2018, defeating VfB Friedrichshafen in the finals. Berlin also made it to the Playoffs 6 round of the Champions League. They took a blow to their lineup when longtime opposite Paul Carroll signed with Yenisei Krasnoyarsk of Russia at the beginning of the summer. It appears Berlin will turn to the United States National Team take over at the opposite position.

Italian journalist Giacomo Tarsi of Volleyball.it is reporting that Ben Patch will be heading to Berlin next season. After leaving Brigham Young University a year early, he played last season at Tonno Calipo Vibo Valentia. He had a season that fell short of expectations for Vibo Valentia.

Patch’s scoring production put him at 21st on the list of top scorers. He finished the season with the regular season with 296 points and 3.31 points per set. While point production was a strength, efficiency and consistency were problems the rookie encountered.  He posted a .246 hitting percentage on the year with a success rate in attack of 44.5%. His efficiency average put him in 41st out of 47 players in the Italian SuperLega who registered enough attack attempts to be rated. Patch also scored points from 16 aces at a rate of 0.15 per set.

Vibo Valentia finished the season in 12th place, a decline in form from their 8th place finish in 2017. While they did not make the playoffs, they beat Biosì Indexa Sora in the first round of the 5th place playoffs 2-1 in a best-of-3 series. Vibo Valentia lost to BluVolley Verona in the quarterfinals 2-0.

Berlin is also turning to the United States National Team to help fill the hole left by Graham Vigrass. Jeff Jendryk will be starting his professional career in Berlin after finishing collegiate career at Loyola University. Jendryk was a four-time AVCA All-American, being named a First-Team All-American his junior and senior seasons. He was a three-time First-Team All-MIVA selection and won the NCAA National Championships his freshman and sophomore seasons. He finished his senior season with 247 kills and a .447 hitting percentage.

Jendryk represented the United States in the 2017 World League and the 2018 Volleyball Nations League. He was a part of the 14-man roster for the United States that took part in the VNL Final Six and won the bronze medal. Jendryk scored 53 points in the tournament, including a team-high 15 blocks. He also led the United States with 0.27 blocks per set rate. Against Russia, the eventual gold medalists, Jendryk scored 9 points on 7 kills, 1 block, and 1 ace. He was the leading scorer of all middle blockers in the match.

Nicolas Le Goff, middle blocker on the French National Team, is also reportedly signing with Berlin. Le Goff played for Berlin during the 2015-2016 season, winning the German Cup, the German Bundesliga, and the CEV Cup. He spent a season in Turkey with Istanbul BBSK before landing in Italy with Taiwan Excellence Latina. He had a rough season in Latina, finishing the regular season in 11th place, but they reached the semifinals of the 5th place playoffs. Le Goff scored 120 points on the year, but was not rated as one of the top middle blockers in the league.

Le Goff has also helped France win a number of competitions. In addition to winning a gold medal at the 2015 CEV European Championships, Le Goff has won gold medals at the 2015 and 2017 World Leagues. He won a bronze medal at the 2016 World League and a silver medal in the inaugural Volleyball Nations League. He finished the tournament as the 3rd-best blocker for France at 0.28 blocks per set.  Le Goff scored scored 56 points on 39 kills, 15 blocks, and 2 aces.

Berlin announced a one-year contract extension with Kyle Russell earlier in the week. While these signings were reported in the Italian media, fans are still waiting for official statements from the club.