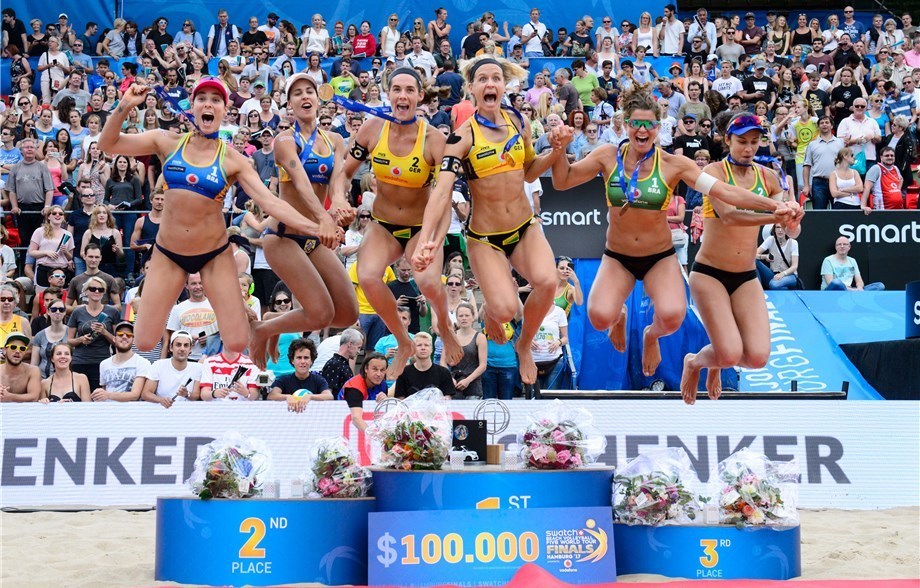 Defending champions Laura Ludwig and Kira Walkenhorst of Germany held onto their title for one more year after defeating No. 4 seed Agatha Bednarczuk and Eduarda ‘Duda’ Santos of Brazil in a three-set finals match.

Already with an Olympic gold medal, World Championship and World Tour title in hand since last August, the Germans added another Swatch Beach World Tour crown with a 21-17, 19-21, 15-10 victory.

It’s been crazy,” Walkenhorst said. “We knew that Laura’s shoulder injury would take some time to heal but when she came back then I was injured so it was a bit frustrating. But to now sit here and win the World Champs and now the World Tour Finals is really amazing. It gives us a lot of self-confidence and I think a big reason for that is the team we have behind us helping us.”

Despite their storied history, the Germans received the No. 10 seed and a wild card entry as Ludwig’s injury has limited the duo to just three international events in 2017.

Agatha/Duda got the gold medal match with a 21-12, 21-12 victory over countrywomen Larissa Franca/Talita Altunes, the tournament’s No. 1 seed.

“It’s a good thing to finish second in a tournament where only the best teams of the world are,” Bednarczuk noted. “It was a wonderful game. They played better than us and they deserved the gold medal. I feel that my blocking didn’t work as well and it could and even with Duda doing a great job on defense we couldn’t stop Kira. We need to try different strategies and see what works.”

In the bronze medal match, Larissa/Talita were victorious over Pavan/Humana-Paredes (21-17, 21-19).