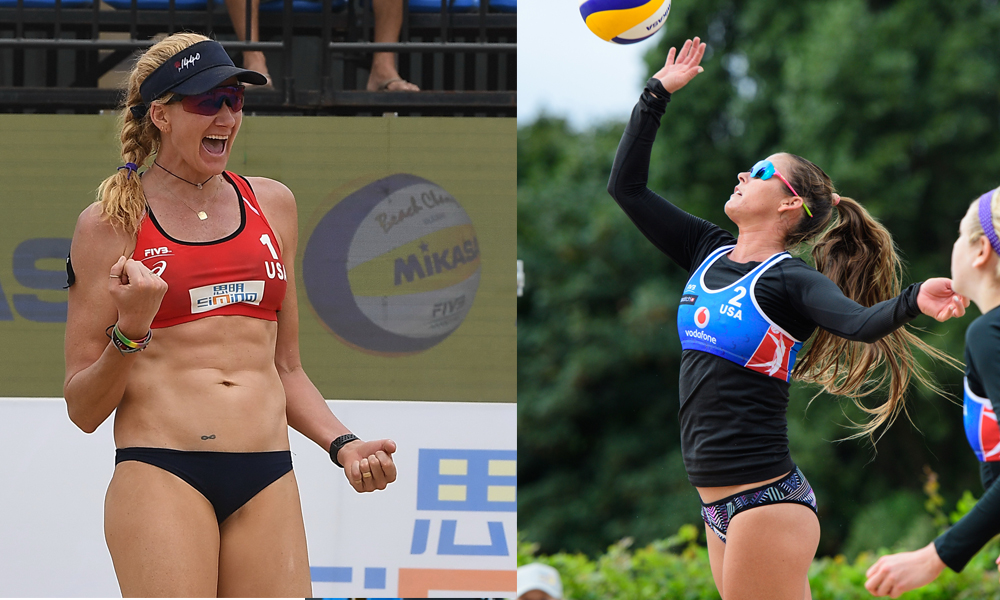 Three-time Olympic gold medalist Kerri Walsh Jennings has made her goals clear for the future, a final run at an Olympic gold in Tokyo 2020.

“I’m so damn excited,” Walsh Jennings told VolleyMob last week. “The journey to Tokyo is going to be just as gnarly and amazing as any Olympic journey of mine has ever been, and I’m really excited to do it with a partner who said yes to me. It’s going to be fantastic.

“My greatest success came with Misty (May Treanor), obviously, and we had that success because of how we complimented each other so well. There wasn’t a lot of redundancy. She completed me, and I completed her, and that’s what I wanted moving forward. I think the new partnership I have is an example of that.”

On Tuesday, the announcement came that Brooke Sweat, 2016 Olympian and four-time AVP Defensive Player of the Year, will officially be Walsh Jennings’ partner moving forward.

“Brooke Sweat has been a consistent contender and a top defensive player in the world since she came on tour and I cannot wait to take the court with her for the first time at the FIVB Las Vegas Open presented by p1440,” Walsh Jennings said. “We are extremely excited, dedicated and passionate about the adventure ahead; we have some lofty, golden goals we plan to realize. Our styles complement each other and we have a fun, scrappy synergy on the court. We’re looking forward to playing against the top talent in Las Vegas and making Tokyo 2020 as golden as possible.”

Sweat, who is returning from a shoulder injury, previously teamed with Lauren Fendrick from 2014 to 2016, including a 19th place finish at the Rio Olympics. She then joined forces with Summer Ross in February 2017, earning eight Top 5 finishes, including a third-place effort at the Fort Lauderdale Major in March 2018. The pair was the runnerup at the Moscow Three Star in June 2017 and finished third at the Qinzhou Three Star in October 2017.

Sweat’s last outing was a seventh-place finish with Fendrick in Huntington Beach in May.

“I’m so excited to get back on the sand again and couldn’t be any happier to be doing it with Kerri by my side,” Sweat said. “She’s the best blocker in the world and one of the scrappiest players too, which makes playing with her so much fun! I love her hustle and grit. Our values, passion, determination and work ethic are very similar so I know we have what it takes to accomplish our goal—gold in Tokyo. I’m looking forward to kicking off our partnership and our road to Tokyo in Vegas!”

VolleyMob sat down with Walsh Jennings and Sweat to get a little more insight on the new pairing.

What are you most excited about for this pairing?

Kerri Walsh Jennings: Battling. I am excited to grow in our partnership in every way. The potential we have as a defensive, point scoring team gets me so excited!

Brooke Sweat: I’m so excited about our potential as a team. We’ve only had a few practices together but it’s clear that we have the same passion, drive and work ethic to become the best team in the world.

What does your new partner bring to the table to complete your game?

Sweat: Kerri is the best blocker in the world, but she is also one of the scrappiest players too. I love this about her. She out hustles her competitors and really makes them work for points. This is the same way I play the game. It’s going to be fun.

How did this partnership come about?

KWJ: We were both looking for a partner with whom would best complement each other – – Brooke was my choice and I was hers.

Sweat: I was out with my shoulder injury, Kerri called, when I was ready we practiced, and now we are here… going for gold.

The Road to the Partnership

Since splitting with Nicole Branagh in July 2018, Walsh Jennings has focused on getting her new beach volleyball tour/concert series/health and wellness venture p1440 up and running, while playing with a few different partners. P1440 made its debut with the San Jose Invitational last week.

Walsh Jennings teamed up with Kelly Claes for a NORCECA qualifier in August and the pair is slated to play at the Yangzhou Four Star in China beginning tomorrow (Oct. 10). She then played the San Jose Invitational with Swiss star Anouk Verge-Depre and announced she would be teaming up with Brooke Sweat for the P1440/FIVB Las Vegas Open in October.