Get The ‘Ship Up To Boston: Harvard Win Their First EIVA Title 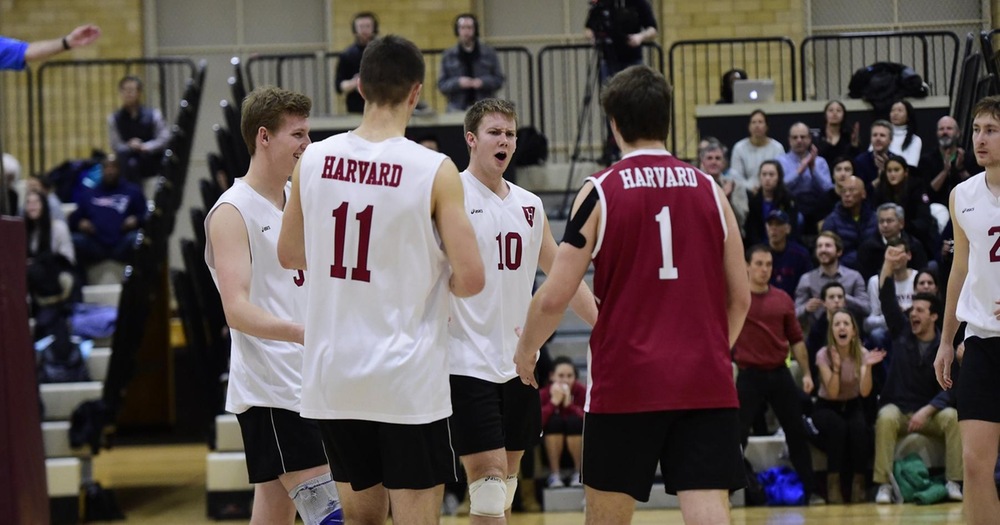 Harvard defeated Princeton for the third time this season to win the EIVA Championship for the first time in program history. Current Photo via Harvard Athletics

FAIRFAX, Va. – For the first time in program history, the Harvard Crimson won the EIVA title, earning their first-ever bid to the NCAA Tournament with a four-set victory over Princeton (25-20, 26-24, 17-25, 25-23). Harvard did most of the damage in their offensive efficiency, outhitting the Tigers, .403-.355. This was also the Crimson’s third victory this season over Princeton.

Harvard was led by EIVA Tournament Most Outstanding Player Brad Gretsch with a team-high 16 kills on .355 hitting to go along with his 8 digs and 3 blocks. Sophomore Erik Johnsson added a career-high 16 kills on .560 hitting. Rounding out the double-digit kill performers for the Crimson was Trevor Dow who pounded 12 kills without an error for a ridiculous .800 hitting percentage. Dow also led the net defense with a match-high 4 blocks. The 6-2 offense was run to max efficiency, with setters Marko Kostich (8k, .316, 30a, 9d, team-high 2 aces, 1b) and Matthew Ctvrtlik (6k, .429, 26a, 2d, 2b, 1 ace) leading the attack. Kostich was also named to the All-Tournament team for his efforts. Libero Chase Howard had a match-high-tying 11 digs.

Princeton can look forward to the future, however, as Oboh is the only starter graduating. Harvard awaits their fate, whether they host the 6/7 match or have to travel to Briston, Tennessee, where King won the Conference Carolinas tournament title for the first time in their program’s history. The tournament field will be announced by the NCAA at 1 p.m. Eastern Time on Sunday, April 22.

FAIRFAX, Va. – Clinching its first EIVA Championship title and trip to the NCAA Tournament in program history, the Harvard men’s volleyball team took down Princeton in the 2018 EIVA Tournament finals by a score of 3-1 tonight, April 21, at the Recreation Athletic Complex at George Mason. The Crimson defeated the Tigers for the third time this season by set scores of 25-20, 26-24, 17-25 and 25-23. With tonight’s victory, Harvard earned an automatic bid to the NCAA Tournament and will await its seeding during the NCAA Selection Show this Sunday, April 22.

The Crimson once again dominated on attack against the Tigers as three Harvard players tallied double-digit kills. Trevor Dow slammed down a career-high 12 kills and zero erros, registering a remarkable team-high .800 hitting percentage. Sophomore Erik Johnsson and senior Brad Gretsch led the team with 16 kills apiece, a new career-high for Johnsson as well. Marko Kostich and Matthew Ctvrtlik also came within striking distance of double figures, notching eight and six kills respectively. The duo connected Harvard to 61 kills on the night, while dishing out an additional 30 and 26 assists each.

Chase Howard returned to the lineup tonight as libero for the Crimson, registering a team-leading 11 digs to stop the Tiger’s offense, as Kostich and Gretsch followed closely behind with nine and eight, respectively. Harvard commanded the blocking battle, putting up 14 at the net compared to Princeton’s six. Trevor Dow led the Crimson with four, while Gretsch and Riley Moore each had three. The Crimson out-hit Princeton .403 to .355 after a dominant first set that ended with a .517 attack percentage.

Concluding the tournament, Gretsch was named Most Outstanding Player in the 2018 EIVA Tournament, while Moore and Kostich were also tabbed to the All-Tournament Team. Between the two matches, Gretsch led the Crimson attack, recording 30 kills and averaging a .378 attack percentage.

Up Next
The Crimson will await its seeding in the 2018 NCAA Tournament during the NCAA Selection Show tomorrow, April 22 at 1 p.m. Further details can be found on NCAA.com.

The story of the 2018 Princeton men’s volleyball season was one of resilience and character, so it should be no surprise that the final chapter held the same themes. The Tigers may not have enjoyed this particular conclusion, but it shouldn’t take away from the pride from every step of the journey that led them back to the EIVA championship match.

Princeton’s dream of winning its second EIVA title 20 years after the historic 1998 run fell just short in the RAC Gym at George Mason, as Harvard used a strong startand some timely late hitting to post a 25-20, 26-24, 17-25, 25-23 victory in a thrilling, tense final.

How close was this final? Harvard won 93 points over four sets, while Princeton won 92. Harvard had a 61-60 edge in kills, a 58-57 edge in assists and a 38-36 edge in digs. Princeton had one more service ace and two fewer service errors.

“I’m so proud of the way we competed tonight, and the way we played all season,” head coach Sam Shweisky said. “I’m proud of the way the guys represented Princeton throughout the year, and we came tonight and competed well. We had great leadership from the seniors, but you don’t make this kind of run without contributions from the whole roster. Our guys are disappointed, but they should hold their heads high. We’ll get better from this experience. Congratulations to Brian Baise and Harvard on a great match tonight, and I wish them well in representing the EIVA in the NCAAs.”

Outside of a brief run in the first set, the Tigers played with rhythm and efficiency on offense, especially from its standout players. First-team All-EIVA opposite George Huhmann led all players with 19 kills, and he hit .302 for the match, while sophomore Greg Luck added 14 kills and hit .407. The third member of the Class of 2020, Parker Dixon, added 15 kills and seven digs, and he hit .333, while senior middle and co-captain Junior Oboh had nine kills, two blocks and hit .368.

Harvard, which hit .403 for the match, got back-to-back kills at 24-24 in the second set to open a 2-0 lead. Princeton responded as it has all season, and dominated the third set for the 25-17 win. The Tigers battled back from a 16-12 deficit in the fourth on a pair of errors and a pair of Huhmann kills, and they grabbed a 22-20 lead on a Luck kill. The Crimson had one run left, though, and scored five of the final six points to take the match.

Freshman setter Joe Kelly made an impressive impression league-wide in his first postseason. After leading Princeton to a 3-1 upset of top-seeded George Mason two nights earlier, Kelly had 52 assists and led the Tigers to a .355 offensive efficiency for the match. Junior libero Corry Short, who battled back from midseason injury for a moment like this, had a match-high 11 digs.

Huhmann, Luck and Oboh were all named to the EIVA All-Tournament Team.