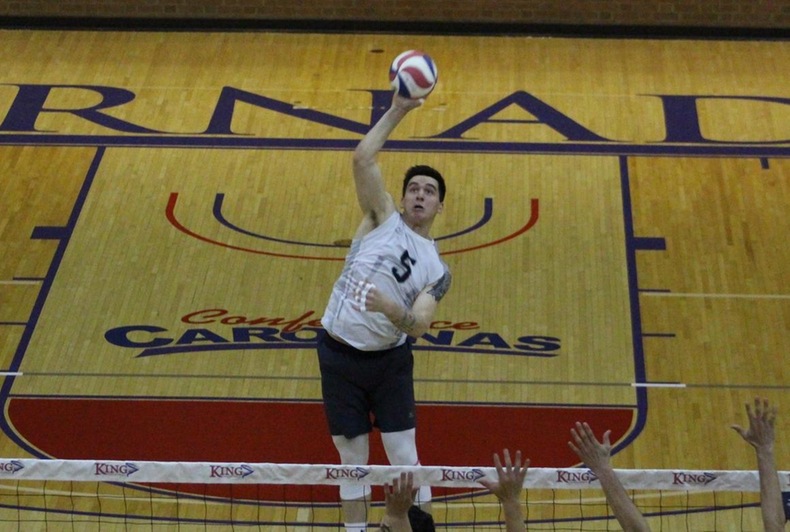 BRISTOL, Tenn. – Just two seasons ago, the #17 King Tornado were 8-24 and were struggling to compete in Conference Carolinas. Saturday night, the journey to the top was earned in the form of a straight-set victory over nemesis (RV) Barton (25-10, 25-21, 25-21). The win also marks the first time in program history that King advances to the NCAA tournament. Our current predictions have them in the 6/7 match against either Harvard or Princeton.

King was led by Conference Carolinas Tournament Most Outstanding Player Jeff Sprayberry with 14 kills on .370 hitting. Kiel Bell added 7 kills, 7 digs and 4 blocks. Jon Wheaton had a match-high 7 blocks to go along with his 4 kills. Libero Leo de Quadros finished with a match-high 9 digs. Setter Nick Drooker led the efficient offense (.287) with 30 assists to complement his 6 digs, 5 blocks and 2 aces.

Barton struggled to compete offensively due to the service pressure the Tornado applied. The Bulldogs were led by Aleksa Brkovic with 9 kills and 6 digs. The Mandilaris brothers, Vasilis and Angelos, who had been carrying the offensive load for Barton for the majority of the season, combined to hit negative in the match (12-14-52) and tallied 8 of the team’s 11 service errors. Vasilis did have the Bulldogs’ lone ace. Setter Oscar Fiorentino led the Bulldogs in assists (23) and digs (7). Justice Lord, who also hit negative in the match, finished with a team-high 3 blocks.

King now waits to hear their name called for the NCAA tournament on Sunday at 1 p.m.

BRISTOL, Tenn. – Champions! The King University men’s volleyball team turned in an impressive performance on Saturday in the Conference Carolinas Championship final against second seeded Barton College. The Tornado opened with a 25-10 set win and put the Bulldogs away in the final two sets behind their stellar defense play, taking the match 3-0.

BRISTOL, TENN. – The Barton College men’s volleyball team saw its hopes of winning a second straight Conference Carolinas Men’s Volleyball Championship come up just short as the King University Tornado handed BC a 3-0 loss on Saturday night at the Student Center on the campus of King.

Barton (21-8) struggled as a team, committing 23 attack errors and hitting just .036 in the match. BC also had a tough time trying to beat the middle blockers of King as the Tornado tallied 24 block assists in the match. King (23-5) captured the program’s first championship with the victory and earned the automatic bid to the NCAA Division I-II Men’s Volleyball Tournament.

Barton tallied the opening point of the match before the Tornado answered with a 3-0 run and a pair of aces from Drooker. After trimming the score to 3-2, the Bulldogs saw King increase its lead to 7-2 and lead to a timeout for BC. The Bulldogs tallied consecutive points to cut the deficit to 11-6 before King used a commanding 8-0 rally to take a 19-6 advantage in the set.

Leary ended the run for the Tornado with a kill off an assist from Fiorentino to make it 19-7. Back-to-back attack errors by the Bulldogs increased the King lead to 23-9 and just three plays later, the Tornado clinched the opening set as Sprayberry delivered an ace to secure the 25-10 victory.

Leading 7-5 in the second set, King used a 4-0 rally to open an 11-5 edge against the Bulldogs. BC rattled off three straight points to trim the gap to 13-11 before Bell tallied a kill to end the run. After falling behind 18-14, Barton pulled within a point of the Tornado as an ace from V. Mandilaris made it 18-17. The Tornado used a 5-0 stretch to take a 23-17 advantage in the set.

Leary kept the set alive for BC with a kill and a block as the Bulldogs cut the Tornado lead to 24-21. King would take a 2-0 lead in the match as an attack error by Barton gave the Tornado a 25-21 win in the set.

Barton looked to rally back from an early 6-1 deficit in the third set as an attack error by the Tornado trimmed the gap to 6-4. Trailing 16-10, Barton cut the deficit to 16-13 as Brkovic delivered a pair of kills in the rally by the Bulldogs. Following a 3-0 rally by the Tornado that would increase their edge to 21-14, Barton answered with a 4-0 run to cut the gap to 21-18. Four consecutive service errors put the Tornado within a point of securing the sweep against the Bulldogs. Sprayberry sealed the 25-21 victory for the Tornado with a kill to give King its second win of the season against BC and punch his school’s ticket to the NCAA Tournament.