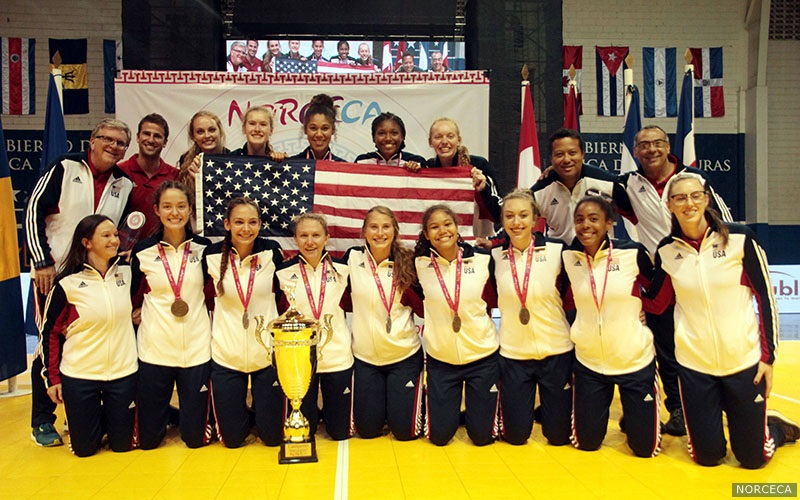 The United States won its eighth NORCECA continental title without losing a set in five matches, besting border foe Canada in three sets Saturday night in front of a packed crowd. Both teams already had earned spots in the U18 World Cup in Egypt by virtue of making the final.

It took just over an hour for the Americans to claim the crown behind an MVP effort by outside hitter Jessica Mruzik and 14 team blocks.

Mruzik downed a match-high 14 kills and added three aces and two blocks to pace the USA with 19 points. Middle blocker Devyn Robinson and opposite Emily Londot tacked on 13 points apiece. Londot starred offensive with 12 kills and an ace, while Robinson turned in eight kills and a team-best five blocks.

“A couple weeks ago, we were out in Colorado Springs – nobody really knew each other. We were only training together for two weeks,” Mruzik said. “This team has bonded better than any team I have ever been on. The team chemistry was out of this world – no team drama, we held each other accountable. We each did our job, and I think that is so important. Winning this tournament was a team effort as every single person contributed every single practice, every single game.”

Outside Katarina Pantovic was the top scorer for Team Canada with nine points, five kills and a match-leading four aces. Captain Hannah Duchesneau also added five putaways from the opposite position.

The United States dominated the net, outdoing the Canadians 14-3 on the block and 39-21 in kills. The Americans also boasted an 8-6 advantage in aces. Canada did benefit from 18 USA miscues, while committing just 14 of its own.

“We are happy,” USA head coach Jim Stone said. “The thing that I really like about this team is that they improved. They kept improving over the course of the training period. If that meant we qualified, that is great, but we wanted to keep improving and they did that.”

Despite the loss, Canadian coach Dale Melnick was also pleased with her team, which made the championship match for the first time in tournament history and bested its only other podium finish, a bronze in 1998.

“The United States is a tremendous team and its coach is very good, but I am very proud of the work that our young athletes did,” Melnick said. “We are going to get something very good from this team. We are very happy, throughout the tournament we could see the support of the Honduran public, also young athletes from here in Honduras have a good relationship with our players.” 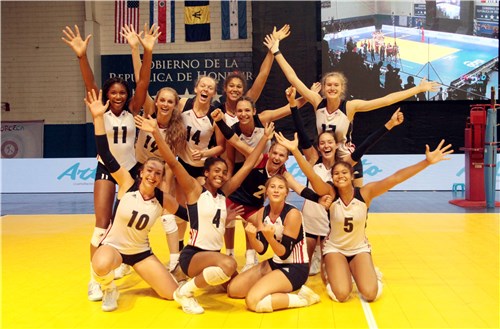 After falling to Canada in five sets after leading 2-1, the Cubans faced an uphill battle against the Dominican Republic after dropping the first set, but came through to claim the bronze.

“We were very affected after losing the first set, because we thought we had lost everything, but we knew how to react,” setter Thalia Moreno said. “In the second set, when we started from the bottom to get up, we realized we could win it.

“We took a lot of experience from this tournament, especially not understate our opponents. We beat Canada in the group stage in three sets and we thought it would be the same team and it was not like that. We trusted each other. We had the public supporting us and that motivated us a lot, despite not playing in Cuba we felt at home .”

Outside Thainalien Castillo registered a match-high 21 points, leading Cuba in kills (16), aces (3) and blocks (2) to lead her team to victory. Opposite Dezirett Madan (12) and Moreno followed with 12 and 11 points respectively. Madan downed nine kills to go with two aces and a block, while Moreno added eight putaways, two stuffs and an ace. Dayana Martinez (8) and Yaimaris Garcia (7) rounded out the scoring.

Outside Flormarie Heredia was the all-around leader for the Dominicans with 17 points (12 kills, 3 blocks, 2 ace). Middle Geraldine Gonzalez (11), middle blocker Esthefany Rabit (10), opposite Yanelys Cabada (9) and outside Romina Cornelio (8) finished off a balanced attack. Rabit put up a team-high four blocks, while Gonzalez posted eight kills followed by Cabada’s seven and Cornelio’s six.