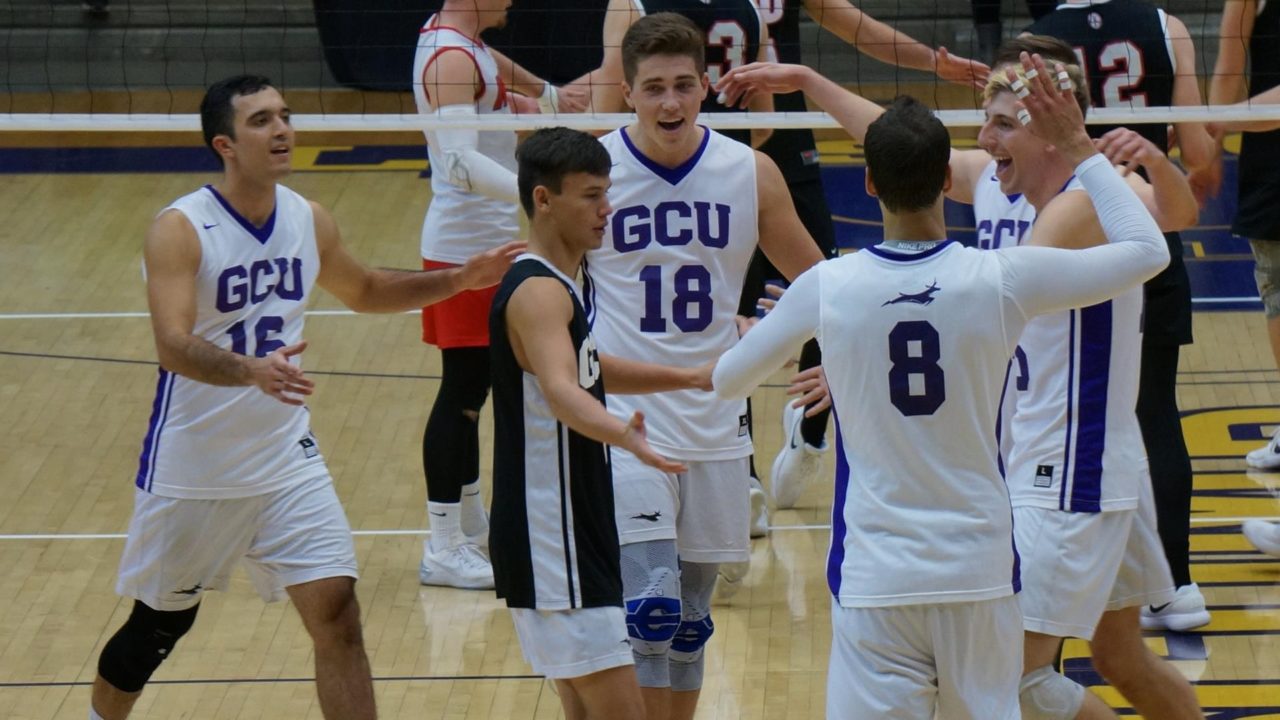 Grand Canyon got back on the winning track with a sweep of NJIT in its home opener, rebounding from last Sunday's sweep at the hands of Hawaii.  Current Photo via Grand Canyon Athletics

PHOENIX – Grand Canyon got back on the winning track with a sweep of NJIT in its home opener, rebounding from last Sunday’s sweep at the hands of Hawaii.

Senior outside hitters Cody Williams and Shalev Saada put down 10 kills apiece to pace the GCU offensive charge, with each hitting .250 or better. Junior outside Will Schwob (6) and redshirt senior middle Ashton King (5) followed. King hit at a .714 clip (5-0-7) and put up a team-high five blocks.

GCU led 14-7 early in Set 1 only to see NJIT rally to within one at 17-16 and eventually tie the score at 20 and take a 22-21 lead of its own. Kowalski notched two blocks, two kills and an ace in the first rally. Two blocks and a kill by Alvaro Gimeno put the Highlanders on top. After ties at 22 and 23, NJIT had the first shot at the set at 24-23 after a service error. A Schwab kill leveled the score and a service error thrwarted a second NJIT attempt. A hitting error and a solo stuff by Saada sealed the GCU comeback at 27-25.

Grand Canyon wasted no time building a six-point lead in Set 3, racing out to a 10-4 advantage with help from three kills and two blocks by Luke Turner and five NJIT miscues. The Highlanders would get no closer than four the rest of the way. Saada notched four kills as GCU went up 20-11. The Lopes ended the night on a 5-0 run, including two stuffs by King, who paired up with Puna Kaniho for the final block and the GCU win.

The No. 12 Grand Canyon University men’s volleyball team played in front of their home crowd for the first time in 2018 on Thursday night when they swept the New Jersey Institute of Technology. Set scores were 27-25, 25-23 and 25-14. The win gives the Lopes a 6-1 record, the best start in program history. With the loss, NJIT falls to 0-6.

“There are some bright notes to take away from this,” Said head coach, Matt Werle. “I am happy that we were able to win a couple duce sets. Secondly, getting the first win at home is great. Our fan support is like none other across the country. It took some getting used to for our own guys because of how loud the gym is!”

The Lopes and the Highlanders battled in front of over a thousand fans in a packed Antelope Gym. The home court advantage seemed to help GCU as they led in almost all categories. Both teams had 85 attacks but GCU had the edge in kills with 39 while hitting .282 on the night compared to NJIT’s 33 kills and .176 hitting percentage. On defense, GCU had 30 digs and 9.5 blocks.

Cody Williams and Shalev Saada led the Lopes offensively with 10 kills each while hitting .273 and .350 respectively. Ashton King continued his hot streak after being selected to the Grow the Game Challenge All-Tournament team this past weekend, contributing five kills with a .714 hitting percentage in addition to two digs and a team-high five blocks. Puna Kaniho was all over the court as he netted two kills on two attempts as well as an ace to go along with his 29 assists and four digs.

The first set established the tone for the night. GCU came out of the gates hot, going up 13-6 thanks to a 7-0 run fueled by kills from five different Lopes. The Highlanders responded quickly scoring six of the next seven points to bring the match within two at 14-12. From there the two teams were neck and neck, ultimately bringing the match to a tie at 25. Will Schwob would serve to an NJIT error and a Saada block followed sending Antelope Gym into a frenzy as the Lopes took the first set 27-25.

The second set picked up right where the last one left off. Neither team led by more than three bringing the score to 17 all. Two NJIT errors gave the Lopes an advantage they would not relinquish. Lead in hand, GCU used a couple of blocks and kills before a Highlanders service error gave the home team a 2-0 match lead.

The third set was all GCU. The Lopes carried the momentum over and used it to go up by as much as 18-9 late in the set. NJIT used a 3-0 run to close the gap before a service error killed their rally. Luke Turner, who got the start in the set, earned a kill and would serve the final four points before a double block from King and Kaniho ended the set and the match.

“Our middles are coming along very nicely offensively and our quick back row attack is getting much better. With all that being said, we need to be a lot better on Saturday night against a much better team.”

Looking ahead
The Lopes are back in action at home against No. 6 UC-Irvine on Saturday night. The Anteaters come into the weekend with a 4-1 record, with their only loss coming from No. 2 UCLA. UCI will play three matches at GCU during the next two days. They will face NJIT on Friday night before facing Benedictine-Mesa on Saturday morning. The Lopes and the Anteaters will wrap up the weekend as they go head-to-head on Saturday at 6 p.m.

The Highlanders drop to 0-6, having played four out of six teams that were ranked in the top 12, including #2 Long Beach State, #4 UCLA, and #11 Cal State Northridge.

The Highlanders lead in serving aces, getting six in the match to the Antelopes two.

The first and second sets were close, but both went in favor of the Antelopes.

The Highlanders had the 25-24 advantage in the first set before Grand Canyon picked up the last three points to win the set.

The second set went at a similar pace with neither team leading by more than three points at a time.

Grand Canyon pulled away winning the third by 11 points to take the win.