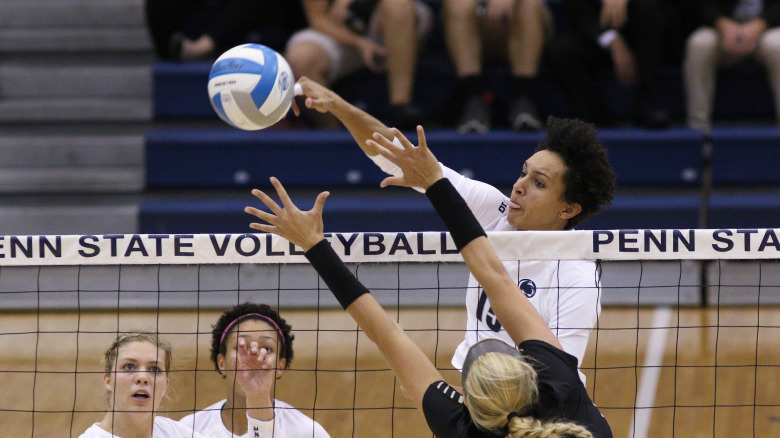 The Colorado Springs, Colorado, native became the 28th player in PSU history to reach the milestone with a match-high 13 kills on an .800 hitting effort, pushing her career tally to 1,009.

The historic kill made it 15-all in Set 1 of the match and was on the senior’s six putaways in the opening stanza.

The teams split the first 12 points of Set 2 before PSU pulled away with a 11-1 run. A trio of blocks, a pair of aces and three Hoosier miscues aided the Nittany Lions rally. Penn State capped the stanza with a 3-1 run, last on a Washington kill.

After a 6-all tie in Set 3, Penn State scored 11 of the next 14 to go up 17-9. Detering served up two aces and the Nittany Lions notched four blocks in the run. PSU did not allow Indiana closer than eight the rest of the way. A Nia Reed kill set up the final point, which came appropriately on a Washington putaway.

The highlight of the evening was Haleigh Washington (Colorado Springs, Co.). The senior middle hitter became the 28th member of the Penn State 1,000 kill club, and was the third Nittany Lion to achieve the feat this season as Ali Frantti (Spring Grove, Ill.) was the first on Aug. 26 at West Virginia, and Simone Lee(Menomonee Falls, Wis.) followed on Oct. 6 at Ohio State.

The last time Penn State had three active 1,000 kill club members was in 2008. Entering the season, Megan Hodge and Nicole Fawcett were already past the mark, but on Sept. 5, 2008, Christa Harmottojoined the club as well.

However, this marked the first time in Penn State history that a trio reached the pinnacle in the same season.

Washington finished with a team-best 13 kills on an impressive .800 hitting, adding five digs and a block.

Heidi Thelen (Edgewood, Ky.) was impressive again, putting down seven of eight kills, on a clip of .875. Tori Gorrell (Oakville, Ontario) added four kills on a clip of .571, and a team-best five blocks.

The second set saw a more defensive performance from the Penn State squad as they held Indiana to just .083 hitting, and tallied three team blocks. Penn State countered with .474 hitting, and 11 kills.

The Nittany Lions return home on Wednesday, Oct. 25 to take on No. 9 Wisconsin at 7 p.m. in Rec Hall. It will be the Penn State Dig Pink match for Breast Cancer Awareness. Fans are encouraged to don pink attire, and the Nittany Lions’ pink warm-ups will be up for auction during the match, all proceeds will go to the Side-Out Foundation for breast cancer research. If fans are unable to attend, donations can be made at the Nittany Lions’ Side-Out Foundation campaign page: https://giving.side-out.org/campaigns/13597.

“What I told the team is that we want to be the best version of ourselves,” IU head coach Sherry Dunbar-Kruzan said. I thought we did that in stretches, especially in the first set tonight and showed the aggressiveness and focus we want to play with.”

Beerman got the Hoosiers (12-10, 1-9) started as she connected on four kills on eight attempts in the first set and Indiana jumped out to an 11-7 lead on the No. 1 ranked Nittany Lions.

Indiana maintained a lead until Penn State tied it at 15-15 and at 16-16 the Nittany Lions used a 4-0 run to go up 20-16. The Hoosiers got within two at 23-21 on a kill from sophomore middle blocker Deyshia Lofton, but Penn State scored on back-to-back kills from Simone Lee to win the first set.

Penn State hit .507 for the match, but after going down 2-0 in the match, the Hoosiers scored three of the first four points of the third set to grab an early 3-1 lead on a kill from Lofton.

Up next the Hoosiers go on the road Oct. 27 against Maryland and Oct. 28 at Ohio State. Indiana is next at home on Friday Nov. 10 at 7:00 p.m. against Wisconsin.