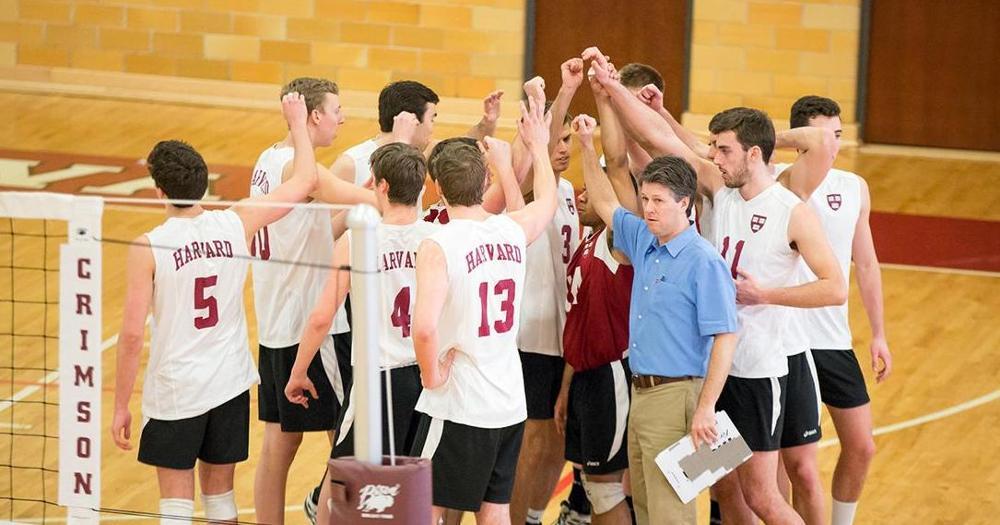 Harvard avenged a five-set loss from earlier in the month, utilizing a crushing blocking effort in a sweep of Sacred Heart Friday night. After falling to the Pioneers on March 3, the Crimson left no doubt this time, dominating them in a 25-23, 25-12, 25-21 win.

Harvard outhit Sacred Heart .284 to .011, thanks in large part to a 16-block effort. Coming into the match, the Crimson were averaging 2.42 blocks per set, which ranked first in the EIVA and 10th in the country. A balanced offensive attack also was key for Harvard as six of the team’s eight players registered two or more kills. Freshman outside hitter Erik Johnsson and senior outside Casey White tallied seven kills apiece to lead the way. White also managed six blocks, while junior middle blocker Riley Moore paced the team at the net with seven stuffs to go with his six kills. Junior setter Marko Kostich and senior libero Samuel Murphy led the back court with six digs apiece.

Senior right side hitter Christopher DeLucie did it all for SHU, but it was not enough. DeLucie put down a match-high 13 kills, while hitting at a stellar .450 clip and adding seven digs, three blocks and two aces. His nearest help came from senior outside Michael Comens and senior middle Doug Dzema, who managed six kills apiece. Comens also added seven digs and a team-best four blocks.

Set 1 was a game of cat-and-mouse play with neither team gaining more than a three-point edge. SHU led 4-2 early and Harvard surged ahead 7-4. The teams tied six times mid-set, last at 15. The Crimson went up three at 18-15 and again at 22-19, but the Pioneers cut the margin to one each time. A hitting error put Harvard on the hill at 24-22, but SHU responded with a stuff. Harvard called timeout and got a kill from Moore out of the break to seal the win.

In Set 2, Harvard flexed its muscles, downing eight kills with no errors for a .533 team hitting percentage, while holding SHU to a -.214 effort with help from 8.5 team blocks. After ties at 5-5 and 6-6, the Crimson broke the game open, wrapping up the set on a 19-6 run.

Sacred Heart started Set 3 with an 8-6 advantage, but two blocks, an ace and two SHU miscues soon put Harvard on top 11-9. The Pioneers answered with a 4-0 run and the teams stayed close the rest the next several points, tying six times, last at 19. Harvard ended the set on 6-2 run, capped by an ace by White.

CAMBRIDGE, Mass. – The Harvard men’s volleyball team downed Sacred Heart in three sets on Friday evening at the Malkin Athletic Center. The win came with set scores of 25-23, 25-12 and 25-21.

Erik Johnsson and Casey White led the Crimson (7-10, 4-4 EIVA) with 7 kills each, with support from Samuel Murphy, who registered six digs. Matthew Ctvrtlik also assisted the Crimson with 15 helpers and five blocks, while Riley Moore registered seven stoppers. The Crimson were off to a strong start after a 7-4  run in the first set, however, the Pioneers fought back, coming within one point until a kill from Johnsson gave the Crimson a 19-17 advantage. Moore shot one down the middle to give the Crimson the set point, 25-23. The second set started off strong for the Pioneers, going point-for-point until the teams were knotted at 6 apiece. Harvard’s defense stepped up in the second set, record 8.5 blocks as a team, and Ctvrtlik and Moore notching four and three blocks, respectively. Harvard limited the Pioneers to a -.214 hitting percentage in the set, while the Crimson earned a season-high .533 hitting percentage during the stanza.

The first 28 points of the third set were neck and neck between the Crimson and Sacred Heart, until a kill from Johnsson gave Harvard the advantage. Sacred Heart fought back to tie the score to 19 apiece, but the Crimson held the Pioneers to a .167 hitting percentage. Johnsson added four kills and two blocks during the frame, while Trevor added two blocks.

Harvard will travel to West Virginia to face Charleston on Friday, March 31 at 7 p.m. and on Saturday, April 1 at 3 p.m.

The Sacred Heart men’s volleyball team took the crimson of Harvard at Malkin Center in Cambridge, Mass. The Pioneers fell 3-0, as they now sit 12-7 on the season, and 5-3 in the EIVA. SHU was led by Christopher DeLucie who tallied 13 kills on the day. The Pioneers are back in action as they take on George Mason in a doubleheader next weekend.