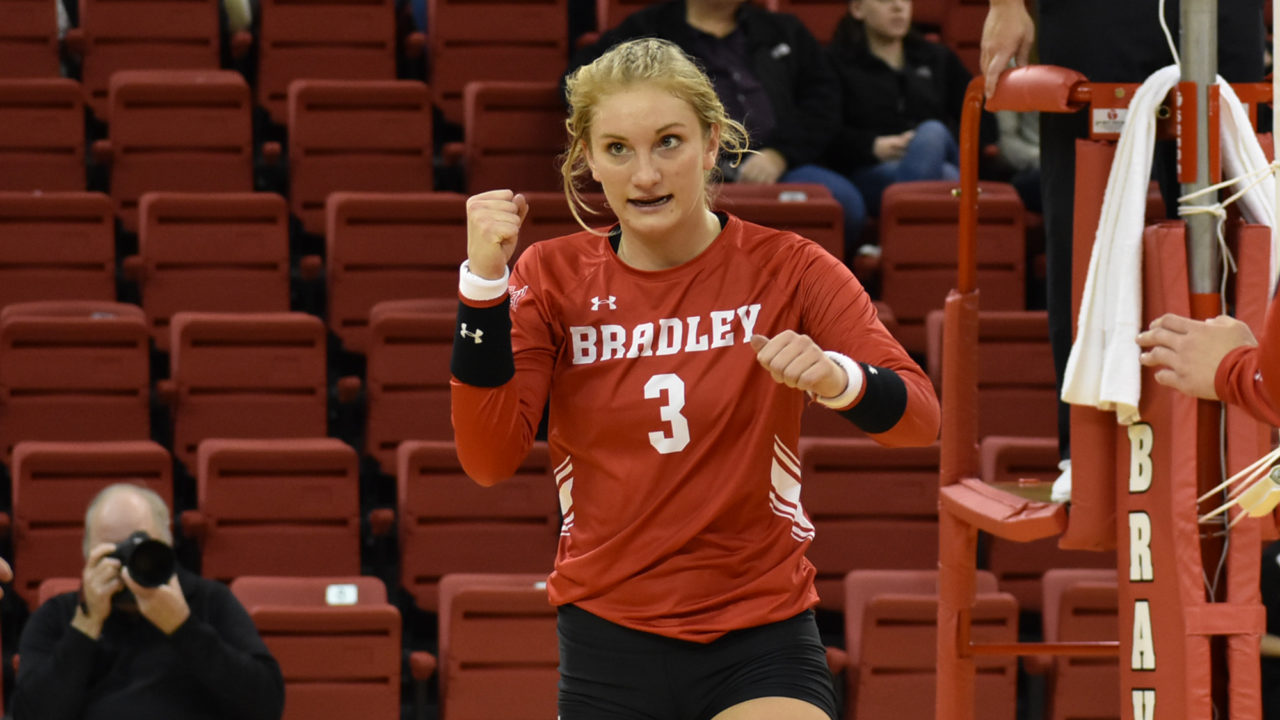 Erica Haslag, Sr., OH, Bradley
Haslag had a pair of 20-kill outings, averaging 4.80 kills per set while boasting a .293 attack percentage to help Bradley pull out back-to-back five-set road wins.  She also averaged a team-best 4.95 points per set as the Braves locked up third in the MVC regular-season standings to mark the best finish in program history since a third-place showing in 2001.  Haslag had 20 kills, two digs and a block in Friday’s five-set win at Valparaiso, tallying five of her match-high 20 kills in the deciding fifth set.  She followed that up by matching her season high with 28 kills to help Bradley rally from two-sets-to-none deficit for a five-set win at Loyola.  She hit .386 in the contest and also added two digs and a pair of blocks.  After the Braves dropped the first two sets, Haslag notched 16 kills in the final three frames and hit .481 (16-3-27) in those sets to help Bradley to its fifth MVC road victory of the year.  Haslag also became the 17th player in MVC history to reach 1,600 career kills in Saturday’s outing at Loyola as she reached 20 kills for the fifth time in the last six matches.

For the 2nd time in 2018, @BRADLEYvolley senior outside hitter Erica Haslag has been named the @MVCsports Player of the Week after helping the Braves pull out a pair of 5-set road wins to lock up 3rd place in the Valley standings.

Courtney Pence, Sr., L, Illinois State
Courtney Pence continued to pace the Redbird defense this weekend in Illinois State’s pair of wins at Loyola Chicago and Valparaiso, helping hold Redbird opponents to a combined .118 hitting percentage. With her fourth dig against the Ramblers on Friday night, Pence surpassed UNI’s Ellie Blankenship’s (2007-10) career digs mark in the Valley record book, making the senior libero the MVC’s all-time career digs leader. She finished with 12 against the Ramblers, before tallying 31 against the Crusaders on Saturday night, to average 6.14 digs per set for the weekend. Pence’s guidance in the back row against Loyola Chicago helped the Redbirds hold the Ramblers to below .100 hitting (.097). Her 31 digs against Valparaiso marked the fifth time this season that the Springfield, Illinois, native has notched over 30 digs in a four-set match. After her 43-dig performance on the weekend, Pence now ranks sixth all-time in NCAA career dig history.

Amelia Flynn, Fr., OH, Missouri State
Amelia Flynn broke her own MSU freshman single-match record with 27 kills in Saturday’s win at Drake, and averaged 5.14 kills on .313 hitting, 2.29 digs, 0.71 blocks and 5.57 points per set in two matches. Flynn, who already shared the freshman kills record at 26 with Lily Johnson and Vanessa Wouters, needed just four sets at Drake to establish the new record, which marked the highest total in a four-set match for any player at MSU since 1998. She hit .328 against the Bulldogs and added 12 digs and four blocks, completing her 11th double-double of the season. Friday, Flynn hit .273 with a team-high nine kills at UNI.

For the 2nd straight week and 4th time this season, Amelia Flynn is the #MVCVB Freshman of the Week.