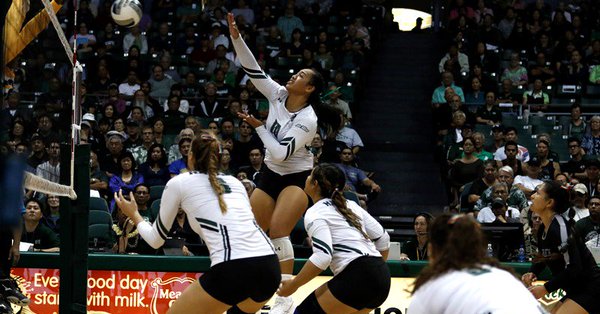 #13 Cal Poly continued its dominance of the Big West with a sweep of UCSB while Hawaii rebounded for a four-set win over Long Beach State.  Current Photo via Hawaii Athletics

Hawaii got back on track in the Big West Conference as it knocked off Long Beach State in four sets Friday night.

It was the 49ers who came out the aggressor in the opening set, as they raced out to a 6-1 early lead. Hawaii continued to chip away and eventually tied the match at 20. The Rainbow Wahine closed out the set on a 5-2 run to claim a 25-22 win.

The Rainbow Wahine looked like they were going to complete the sweep as they held a 10-5 advantage early in the third. But the 49ers reeled off seven straight to take a 15-12 lead. Hawaii rallied several times, but it was Long Beach State that scored three of the final four points for a 25-23 win to force a fourth set.

Sixteen SWEETER when it's a #BlueGreen W.