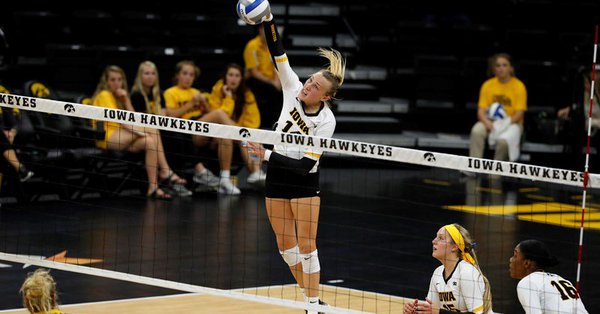 Off to a slow 1-2 start in the Big Ten, #12 Penn State delivered a huge victory on the road in Ann Arbor, as the Nittany Lions knocked off #16 Michigan in three sets, handing the Wolverines their first home loss of the season. In Evanston, #24 Iowa survived a five-set test from Northwestern to pick up its second conference win.

In the opening set, it was the Wildcats who came out looking strong. Northwestern scored four of the first five points of the set and took control early. Iowa mounted a late rally and took the lead at 20-19. From there, it was a back and forth affair, until Northwestern scored the final three points to grab the first set, 25-22.

The second set belonged to the Hawkeyes as they built an early lead and extended it to as many as six at 19-13. Northwestern charged back, answering with a 6-1 run to tie the set at 20 apiece. The Wildcats managed three set point tries, but it was the Hawkeyes that delivered three straight to even the match at a set apiece with a 28-26 win.

In the third, Iowa used an 6-2 spurt to take control of the set and the Hawkeyes never looked back. Iowa outscored Northwestern 14-4 down the stretch to run away with the set, 25-11.

Down two sets to one, Northwestern did not quit, putting together a 7-2 run midway through the fourth to grab a 15-13 lead. The Wildcats kept the lead until Iowa knotted up the score at 23, forcing a Northwestern timeout. Two plays later, an Iowa error gave Northwestern the set, 25-23, to force a decisive fifth set.

The fifth set was wild and full of runs. Iowa opened the set with a 5-1 run to take control early. Northwestern chipped away and then used a 5-0 surge to turn a 9-5 deficit into a 10-9 lead. But the Hawkeyes had one final rally in them, using a 6-2 spurt to finish the Wildcats, 15-12 in the fifth.