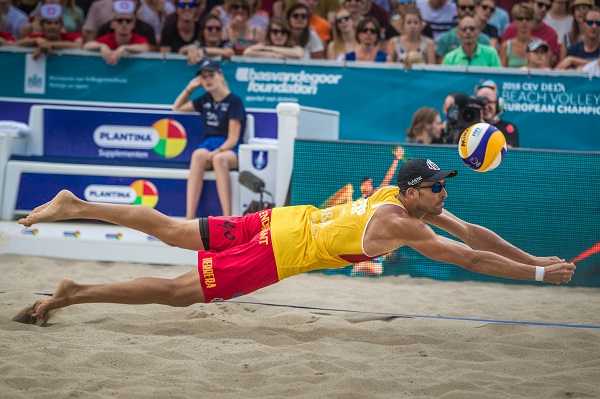 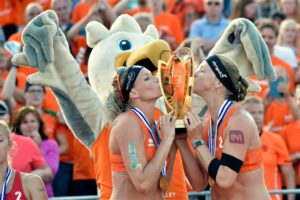 Sanne Keizer/Madelein Meppelink pleased the home crowd at the Hague with a pair of victories on Saturday to claim the CEV Beach Volleyball Championships title, marking the second crown for each member of the Dutch pair.

With two members of the quarterfinals field already decided on Friday, the remaining six matches finished up on Saturday and the field was further reduced to four, setting up Sunday’s race for the podium.

Dutch duo Alexander Brouwer/Robert Meeuwsen and Latvians Janis Smedins/Aleksandrs Samoilovs cruised to sweeps to move on to the quarterfinals on Friday. The Dutch pair are the defending silver medalists, while the Latvians claimed the 2017 bronze.

The pairs faced off in the quarterfinals with the Latvians upsetting homestanding Brouwer/Meeuwsen 13-21, 22-20, 15-10 to stay in the medal race.

Herrera/Gavira will be looking for their first European title since 2013, while Smedins/Samoilovs are aiming to add to their 2015 crown.

Semenov/Leshukov made their way through with a pair of straight set affairs, besting Czechs Ondrej Perusic/David Schweiner and countrymen Oleg Stoyanovskiy/Igor Velichko.