Sanne Keizer/Madelein Meppelink pleased the home crowd at the Hague with a pair of victories on Saturday to claim the CEV Beach Volleyball Championships title, marking the second crown for each member of the Dutch pair.  Current Photo via CEV 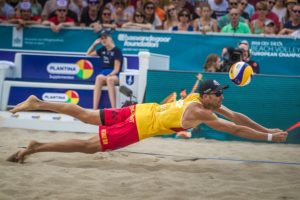 Sanne Keizer/Madelein Meppelink pleased the home crowd at the Hague with a pair of victories on Saturday to claim the CEV Beach Volleyball Championships title.

It marked the second career European crown for both of the women, with Keizer grabbing the 2012 title and Meppelink winning in 2014, each partnering with Marleen van Iersel.

The Dutch duo played through a tiebreak match against Czech pair Barbora Hermannova/Marketa Slukova in the semifinals (20-22, 21-17, 15-12), before grabbing the crown with a sweep of Swiss pair Nina Betschart/Tanja Huberli (21-16, 26-24).

“I think it was a wonderful journey. I think that in the pool play against France I, personally, played at a very bad level and I learned a lot from that game,” Meppelink said. “I was extremely upset with the defeat but we learned a lot in the process and it gave me confidence that we could do it better. I really wanted to do it better and it helped us as we grew every time; we played better with every game. I am very happy with that.

“We have played together for just half a year, so we are really happy with the progress we have made, but we are also experienced athletes, so we know it goes with ups and downs and we know that the downs will come as well. That is why you need to enjoy the ups even more. It is such a big up winning the European Championship in your own country. It’s great.”

Betschart/Huberli made the final after going the distance against Spain’s Liliana Fernandez/Elsa Baquerizo (14-21, 23-21, 15-13). The silver medal marked the second Euro Beach Volley runnerup finish for Huberli, who also was second to Meppelink in 2014, playing alongside Tanja Goricanec. For Betschart, the medal was her first at t senior level event.

Hermannova/Slukova were awarded the bronze medal after Liliana/Elsa forfeited after 38 minutes with the score at 21-18, 20-16 in favor of the Czechs. Liliana reportedly suffered an injury in the pair’s quarterfinal match on Friday, and a medical timeout immediately preceded the Spaniards’ withdrawal on Saturday.

The bronze was the second European Championships medal for the Czech pair, following a silver in 2016.