Inside the Numbers: A Look at the NCAA Stats through Week 2 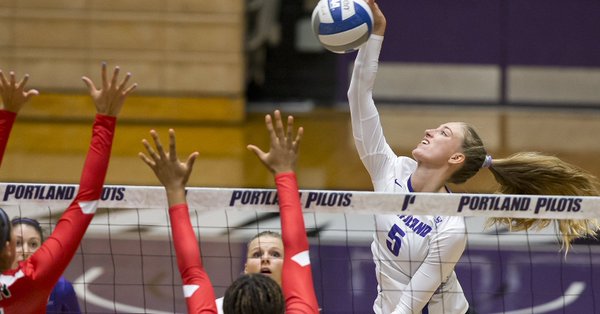 After two weeks of NCAA Division I action, Portland is the nation’s most efficient offensive team, while Penn State has... Current Photo via Portland Athletics

After two weeks of NCAA Division I action, Portland is the nation’s most efficient offensive team, while Penn State has held foes to the lowest numbers offensively. The Pilots are hitting at a .318 clip, while the Nittany Lions are allowing foes to hit at just a 0.067 clip.

Loyola Marymount is tops in kills (15.64) and assists per set (14.82). Notre Dame is serving up 2.56 aces per set. Northern Kentucky and Syracuse are holding down the top spots defensively. NKU has pulled up a nation-leading 21.48 digs per set, while the Orange have put up 3.50 blocks per stanza.

Individually, Cincinnati’s Jordan Thompson, this week’s VolleyMob Player of the Week, is No. 1 nationally in kills (6.11) and points (6.67) per set.

Florida Atlantic’s Cailea Gibbs is the most efficient player, hitting at a .563 clip. LMU’s Tess Reid has dished out 13.05 assists per set, while South Carolina’s Aubrey Ezell has served up 1.19 aces per stanza.

Defensively, Morehead State’s Maddie Fella has racked up 2.06 blocks per set to lead the nation, while Charlotte’s Yumi Garcia has managed 6.70 digs per set.