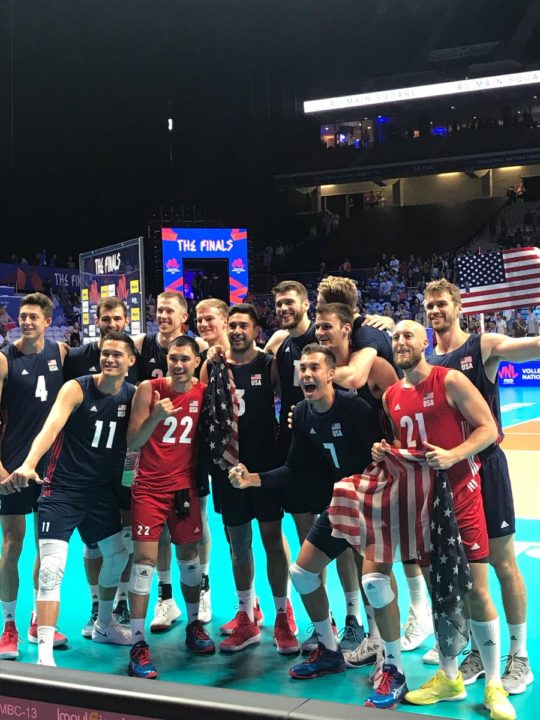 The United States will use a familiar lineup in their bid to win a second FIVB World Championship this month. Current Photo via FIVB

Head Coach John Speraw has announced the 14 players he will be taking with him to the 2018 FIVB World Championships. Speraw has gone with a primarily veteran staff. Matt Anderson and Dave Smith have played in a pair of Olympics: London in 2012 and Brazil in 2016. Anderson, Smith, Taylor Sander, Micah Christenson, Max Holt, Erik Shoji, and Kawika Shoji all won a bronze medal at the  2016 Olympic Games in Rio de Janiero, Brazil and were on the roster at the 2014 FIVB World Championships in Poland.

There are not many notable surprises on this roster when looking back at the team composition from the FIVB Volleyball Nations League, the 2017 FIVB Grand Champions Cup, and the 2016 Olympic Games. One surprise to some fans is the lack of T.J. DeFalco on the roster. The outside hitter starting his senior year at Long Beach State was the fourth-leading scorer at the Volleyball Nations League with 93 points on 72 kills, 15 blocks, and 6 aces. Speraw chose to only take 3 outside hitters and 5 middle blockers. One might think that Matt Anderson might be used as an outside hitter at one point instead of his listed position of opposite. Anderson played outside hitter in college and currently plays that position for his club team.

The current roster left on Monday, September 3rd for Ljubljana, Slovenia for a a warm-up tournament from September 6-8 with Slovenia, Canada, and Iran. They will then head to Bari, Italy for Pool C of the World Championships with Russia, Serbia, Australia, Tunisia, and Cameroon. They will open the tournament against Serbia on September 12th. The United States will be looking to win only their second title at this event. They last won the gold medal in 1986.