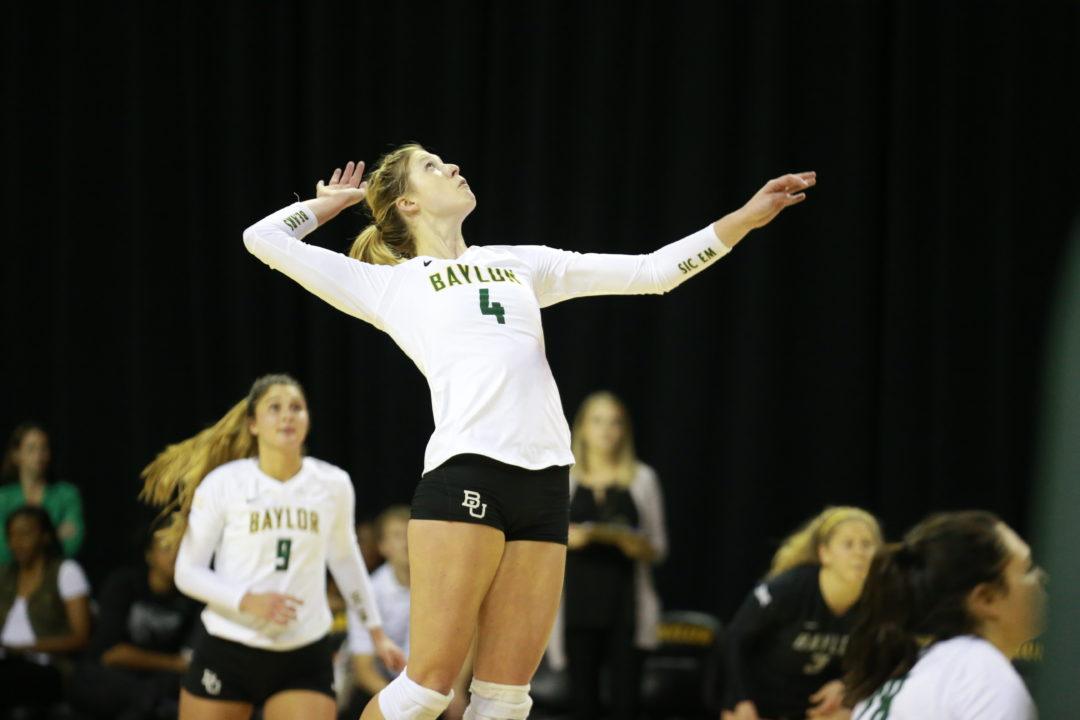 Baylor outside hitter Katie Staiger offers insight into her fifth preseason camp, including the team make up, her fellow seniors and team goals.  Archive Photo via Baylor Athletics

Baylor outside hitter Katie Staiger offers insight into her fifth preseason camp, including the team make up, her fellow seniors and team goals. The senior was a second team All-America and first team All-Big 12 selection in 2016 after racking up a Baylor record 698 kills and ranking third nationally in kills and points (768.5) and fourth in kills per set (5.45)  and points per set (6.0).  The Plano, Texas, native led the Big 12 in each category, while also managing 2.67 digs per set and serving up 32 aces for the Bears. Staiger, a six-time Big 12 Offensive Player of the Week selection last year, was tabbed as a unanimous preseason All-Big 12 honoree a few weeks ago.

Baylor has its eyes set on a return to the postseason after making an NCAA second round appearance and posting a 22-12 mark in 2016. The Bears have a stacked slate ahead in 2017, including matchups with No. 10 BYU, No. 15 Florida State, and No. 20 Hawaii in non-conference action. The team will rely on a four-member senior class, including Staiger and second team All-Big 12 honoree Camryn Freiberg (MB).

Baylor opens the season at home on August 25, when it welcomes the Seminoles, Illinois State and UC Santa Barbara for the Hampton Inn & Suites Wavo Baylor Invitational.

Get Staiger’s take on her Bears’ team after a week of preseason workouts below.

As I enter the second week of two-a-days, my fifth round I might add, I think it is safe to say that despite the soreness and exhaustion, I am more excited for this season than I have ever been.

This team has been committed to this season since the last point of the second round of the NCAA Tournament last year. While this is the first week of official practices, we started working towards some of our goals this summer. It has been awesome to see how everyone’s hard work in the weight room and open gyms this summer has taken us to the next level.

Baylor volleyball welcomed in six new freshmen this year who are already making an immediate impact. It has been awesome having the freshmen in the gym as they are not only giving us more depth, but making practices more competitive and fun!

Another thing that is special about Baylor this year is our senior class—it is one that I am truly honored to be a part of. We have four returning seniors this year—Camryn Freiberg, a middle hitter who transferred from HPU last year and immediately made a positive impact on our program; Jana Brusek, our libero who is all over it all the time; and Tola Itiola, a fifth-year senior middle hitter who we are excited to get back this year—and jumps higher than anyone you’ve ever met. While our senior leadership is full of some incredible athletes, I am excited about this year because they are even better people.

Going in to my senior season, I am excited about the potential this team has to go deep in to the tournament. I was so honored to be named an All-American last year and am looking forward to building off this in the 2017 season!

I am confident that God has big plans for this season and I am excited to get it all started!