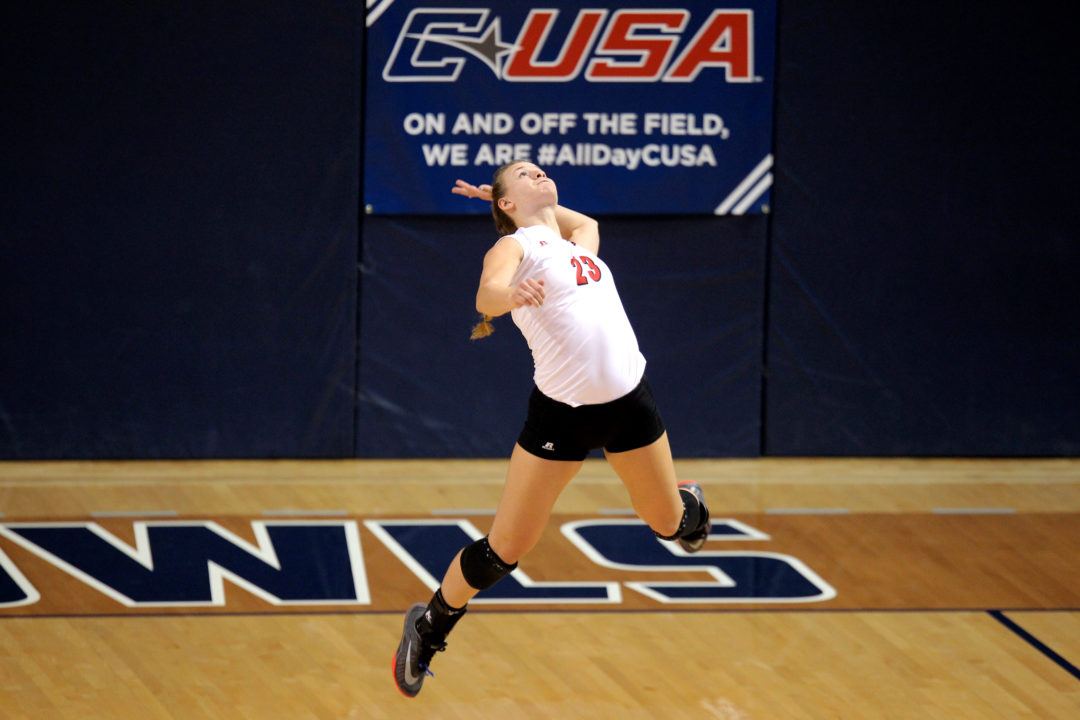 Western Kentucky sophomore Sophia Cerino pulled back the curtain on what's happening with the Lady Toppers heading into the 2017 campaign, including gym time, leadership and more.  Current Photo via WKU Athletics

Western Kentucky sophomore Sophia Cerino pulled back the curtain on what’s happening with the Lady Toppers heading into the 2017 campaign, including gym time, leadership and more.

Cerino played in all 33 of Western Kentucky’s matches as a rookie, managing 16 aces and 24 kills at outside hitter. The Brentwood, Tennessee, native also garnered the Conference USA Commissioner’s Academic Medal and C-USA Commissioner’s Honor Roll recognition.

The Lady Toppers are coming off their 15th-straight 25 win season, posting a 30-3 record, en route to their sixth-straight Conference USA regular-season title and third-straight conference tournament crown. WKU also made its 10th NCAA Tournament appearance since 2002 and sixth appearance in the past seven seasons. The squad returns three All-Americans as three-time honorees Alyssa Cavanaugh and Jessica Lucas are back for their senior seasons, while junior Rachel Anderson also returns. Cavanaugh, the league’s reigning Player of the Year, was tabbed as the Preseason Player of the Year. Lucas and Anderson also were named to the Conference USA Preseason All-Conference squad.

WKU kicks off its 2017 season August 25 in Oxford, Ohio, where the team will face off with Southern Illinois, Northern Arizona and the host Miami (Ohio) Redhawks.

Cerino’s take on the preseason so far is below.

The collegiate volleyball world has been pretty quiet since December, but the gyms and weight rooms have not been and I’m excited to fill you in on what Western Kentucky University Volleyball has been up to.

We’ve been back on The Hill for a little over a week now, and while this preseason has been taxing physically and mentally on our team (as preseason should be), I am incredibly proud of how everyone has responded. With every session, I’ve seen improvement in my teammates and myself; everyone has stayed locked in and determined to keep getting better.

A typical day of preseason for us looks like this: the day starts with a team breakfast at the student union before practicing from 9-11:30 a.m. followed by a break for lunch, then our afternoon session begins at 2 and wraps up around 5. We have been working on a variety of things this preseason including: serving and serve receive, hitting shots, blocking technique and so much more.

Every day of preseason training makes me more and more excited to see what we can accomplish this season with the amount of talent and determination within this group. We return 100% of our offense this year, but graduated two key ball control players, Kaelin Grimes and Georgia O’Connell. Despite losing those two, we have a great amount of depth and the gym has never been more competitive in order to earn playing time.

Our freshmen (Hallie Shelton, Kayland Jackson, Darby Music and Taylor Bebout) have all had a great preseason and are catching on quickly to all they are being taught. I believe they will all have an impact on the success of the team this season as will our returning All-Americans: Alyssa Cavanaugh, Jessica Lucas and Rachel Anderson. All three have stepped up as leaders for the team again this year, each providing a different yet crucial form of guidance. Alyssa leads through her passion and competitiveness, Rachel gets out there and leads by example and Jessica leads through her communication and positive mindset. (I have never not seen Jess smiling.)

With the tough schedule that we have this upcoming season, I am confident that our coaching staff and team will push each other to compete at the highest level and accomplish our goals. I cannot wait to begin the season and I wouldn’t want to compete with any other team by my side. It’s going to be another fun year on The Hill.