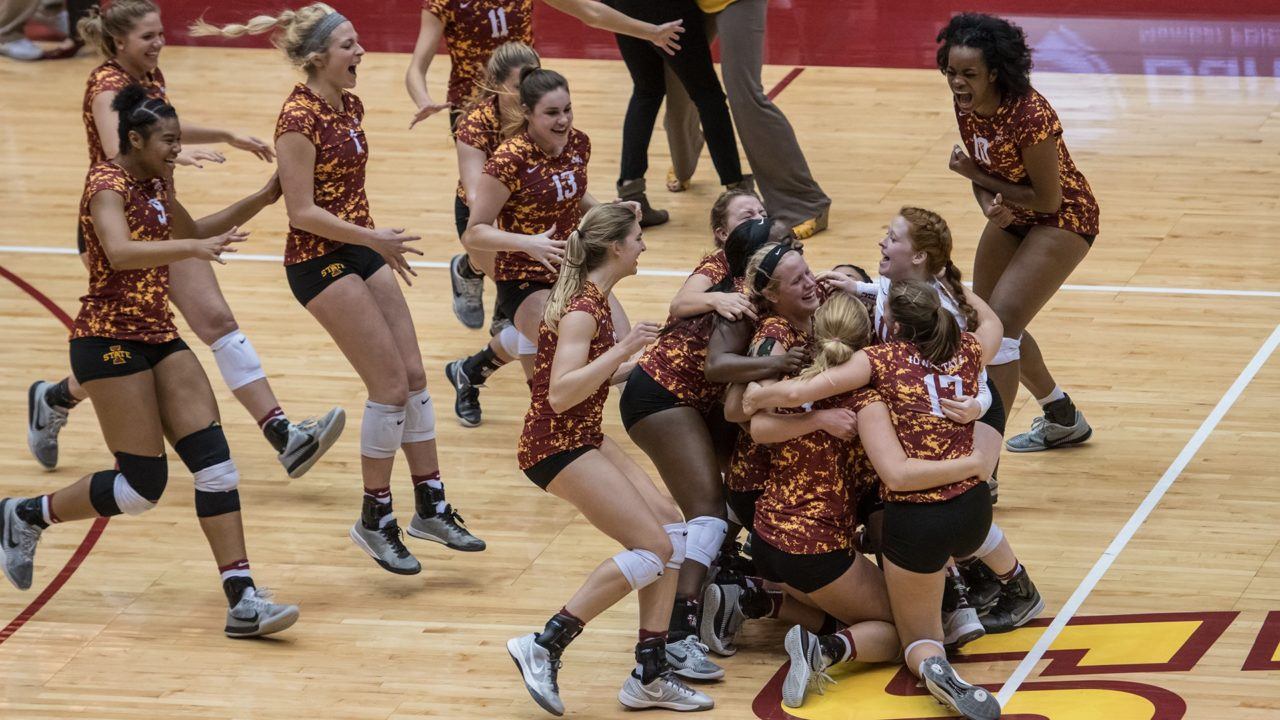 Iowa State takes down the #5 Texas Longhorns for their first victory against their in-conference rival in four years. Current Photo via Iowa State Athletics

After being down two sets to one, the Iowa State Cyclones put together their best match of the season to earn a five-set win against the No. 5-ranked Texas Longhorns. It is the first time the Cyclones have beaten the Longhorns since 2012.

With the loss, Texas falls to second in the Big 12 Conference behind Kansas.

Iowa State totaled 70 kills as a team, and were led by Samara West. West recorded a career-high 16 kills on a .400 attack percentage. Jess Schaben was close behind with 15 kills (and 2 blocks), and Grace Lazard (12 kills, 6 blocks) and Morgan Kuhrt (12 kills, 1 block) also reached double-digits.

Schaben had a double-double, adding 18 digs to her 15 kills, as did Suzanne Horner (29 assists, 15 digs). Hali Hillegas led the Cyclones in digs with 26.

For Texas, Ebony Nwanebu led the match in kills with 18. Paulina Prieto Cerame also had a productive match with 17 kills, and both she and Nwanebu contributed 3 blocks apiece. Morgan Johnson led the Longhorns in blocks with 9, in addition to knocking down 7 kills.

Iowa State has some time off before their next match, but unfortunately, they play No. 4-ranked Kansas. We will have to wait and see if they can continue their giant-killing ways. Texas, on the other hand, will have to make a quick turnaround and play Texas Tech this Wednesday, November 16th.

The Iowa State offense powered down 70 kills, led by a career-best 16 from Samara West at a .400 hitting percentage. Also joining West in double figures was Jess Schaben with 15 and 12 each from Morgan Kuhrt and Grace Lazard. Hali Hillegas paced a Cyclone defense that recorded 88 digs with 26 of her own, while Schaben finished with a double-double with 18 digs. Suzanne Horner also had a double-double of 29 assists and a career-best 15 digs.

Cyclones Lose Lead Late to Longhorns
Iowa State was in command for most of the first set, with Jess Schaben being the primary pacer of the offense. The Cyclones were ahead by as many as four at 12-8 before Texas pulled it back to 13-13. The Cyclones and Longhorns exchanged the lead five times in the first, but ISU looked home free at 22-20 after a UT attack error. However, it was the Horns who reached set point first at 24-22, which they converted with a Micaya White kill at 25-23.

Dominant Offense Bounces Back to Take Second Set
Texas enjoyed an early lead, with a pair of 3-0 run keeping the visitors in front. However, Christy Johnson-Lynch made a strategic decision to move Genesis Miranda into Ciara Capezio‘s front row position. The move paid dividends immediately, as Miranda helped spark the Cyclones back ahead at 10-9, and by as many as five points at 18-13. The Longhorns hung tough, fighting back to two at 18-16, but the Cyclones had another urn in them to get the lead back to 23-17. Iowa State tied the match when Autumn Rounsaville’s serve went into the net.

Texas Powers Way to 2-1 Lead
The Longhorns got in control early, with Paulina Prieto Cerame putting UT ahead at 7-6, and the Horns not looking back. UT used a few 3-0 runs to help build the gap up to five points at 16-11. ISU got a 3-0 run to cut that Texas advantage back to two at 16-14, but UT fought back, with its offense hitting .415 on the frame, and Prieto Cerame posting six kills. Texas got ahead 2-1 when Suzanne Horner sent a serve long.

Iowa State Scraps to Fifth Set
The passion on the court and in the stands was everywhere in set four. Both teams and coaching staffs wanted every point and let it show. Iowa State went on a 4-0 run via Miranda’s serve to get ahead 12-9. UT cut it back to one at 12-11, but Alexis Conaway went behind the service line and fired a 7-0 run to put Iowa State ahead at 19-11. From there, the Longhorns were able to pull ISU back in, bringing the Cyclone lead down to three at 22-19, but Iowa State did what they needed to force a fifth, which happened when Morgan Johnson misfired on a serve to make it 25-21 Cyclones.

ISU All the Way in Set Five
Reflecting on the Cyclones’ loss in Austin back on Oct. 8 in five sets, the value of not falling in a big hole early becomes apparent. This time, it was the Cyclones who made sure they were ahead. Lazard got a kill to make it 4-3 ISU, starting a 3-0 run to give the Cyclones a 6-3 advantage. The home team led at the switch at 8-4, and ISU got it to five when Miranda recorded another kill. Ebony Nwanebu fired a service error to bring up match point, which ISU earned when Texas’ White was called in the net on an attack at 15-11.

Up Next
Iowa State will have a bye in the mid-week, and will be back in action next Saturday at No. 4 Kansas. The time for the match is still yet to be announced.

Freshman Micaya White had her sixth double-double of the season with 13 kills and 11 digs, also posting a career-high three service aces.

In the second set, neither team led by more than two points until ISU took a 15-11 lead on a 4-1 run. The Cyclones controlled the rest of the and evened the match, 1-1 after winning set two, 25-21.

The third set was similar to the second set, as neither team led by more than two, but it was Texas that went on a 3-0 run to take a 10-7 lead. The Horns created more separation with another 3-0 run, but the Cyclones responded with a 3-0 run of their own to pull within two at 14-16. From there, Texas pulled away one more time and maintained control to take set three, 25-20.

In the fifth set, the Cyclones and Longhorns went point-for-point until Iowa State went on a 6-1 run and did not look back, taking set five, 15-11.

Texas will return home for three matches to close the regular season, starting with Texas Tech on Wednesday, Nov. 16 at 7 p.m. The match will be televised live on Longhorn Network.