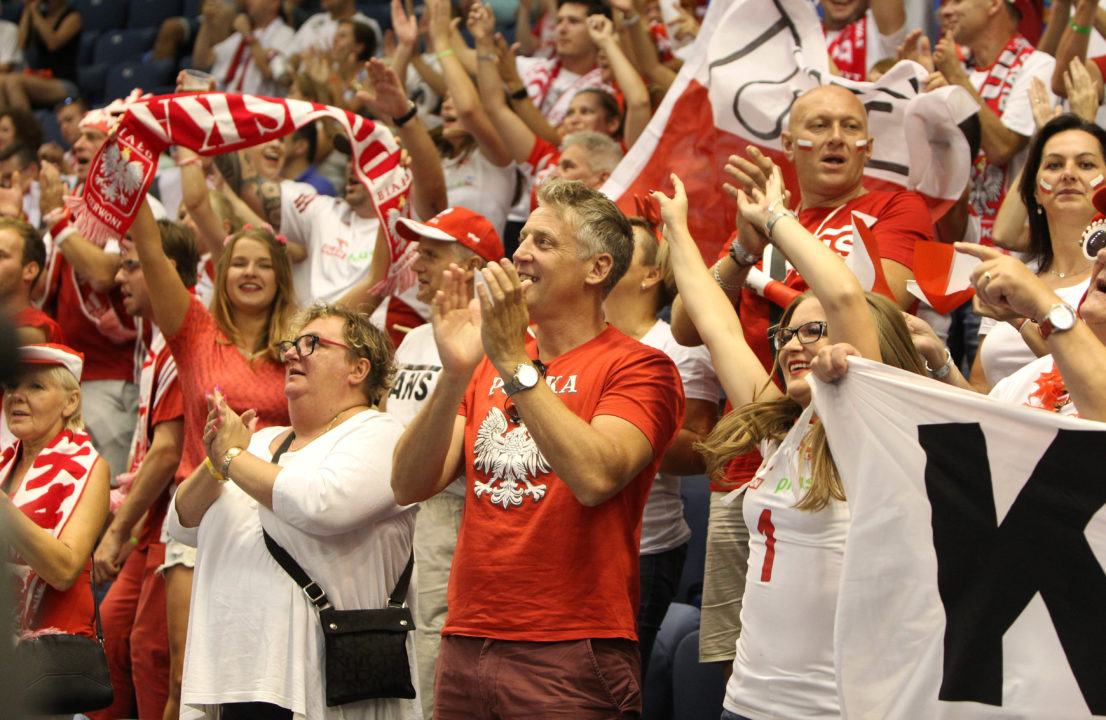 Poland was dominant in all phases of the game against Puerto Rico, earning its second win of the World Championships. Iran also moved to 2-0 with a four-set win over co-hosts Bulgaria.  Current Photo via FIVB

Poland was dominant in all phases of the game against Puerto Rico, earning its second win of the World Championships. Iran also moved to 2-0 with a four-set win over co-hosts Bulgaria.

“We played a controlled game, using a lot of players,” Polish coach Vital Heynen said. “We try to keep all of them ready to play on a good level further down the tournament but we still managed to win clearly. I think we dominated on serve. In general that was a good game for us. And again we felt a great atmosphere here and we would like to thank all of our supporters.”

The Poles picked up the win despite sitting Piotr Nowakowski, Bartosz Kurek and Artur Szalpuk for the entire match. Szalpuk (20) and Kurek (17) were the top scorers in Poland’s tournament opening win over Cuba on Wednesday, while Nowakowski chipped in nine points.

Stepping into the spotlight on Thursday were outside hitter Aleksander Silwka (13) and middle blockers Mateusz Bieniek (12) and Jakub Kochanowski (11), with each turning in double-digit scoring efforts. Silwka and Kochanowski put down nine kills apiece, while Bieniek added seven putaways. Silwka also led the team on the block with three stuffs, while Bienek served up three aces and added two stuffs.

Opposite Maurice Torres notched eight points, all on kills, while middle Jessie Colon added six points with five kills and a block. Thirteen players saw court time in the match, with seven scoring.

The Polish side made good on 72 percent of its attacks in Set 3 and added in four aces to finish off the sweep.

Despite the crushing loss, Puerto Rico is not giving up the fight though.

“We could not keep up the high playing level of Poland’s team,” coach Oswald Antonetti said. “Competing in such a big tournament is something completely new for us and it influences our performance for sure. Despite that we are here to fight and we try to improve our game in every aspect.”

Iran boasted the advantage in all four sets, although the host Bulgarians rallied in each, pulling off a comeback in Set 3. Errors were the biggest factor in the match as Bulgaria gave away 36 points, while Iran committed just 20 miscues.

Todor Skrimov was tops among the Bulgarians with 17 points (15 kills, 1 block, 1 ace). Nikolay Uchikov, Viktor Yosifov and Nikolay Penchev added 10 points apiece. Uchikov downed 10 kills, while Yosifov put up three blocks and served up two aces. Penchev notched seven kills, two aces and a block. Valentin Bratoev, who was the leading scorer in the team’s Sunday win over Finland scored just four points, all on kills, after starting the first set and returning as a substitute in Set 4.

The teams were tied at 18 late in Set 3 when video replay came to the home team’s aid. Coach Plamen Konstantinov was proven correct and the Bulgarians were awarded a 21-19 advantage. Viktor Yosifov came through after that with a block and a kill to extend the match with a 25-22 victory.

The teams played to a 12-all tie in Set 4 before Iran pulled ahead with 5-2 run. Bulgaria cut the margin to one twice, but could not break through as the Iranians closed out the match at 25-19.